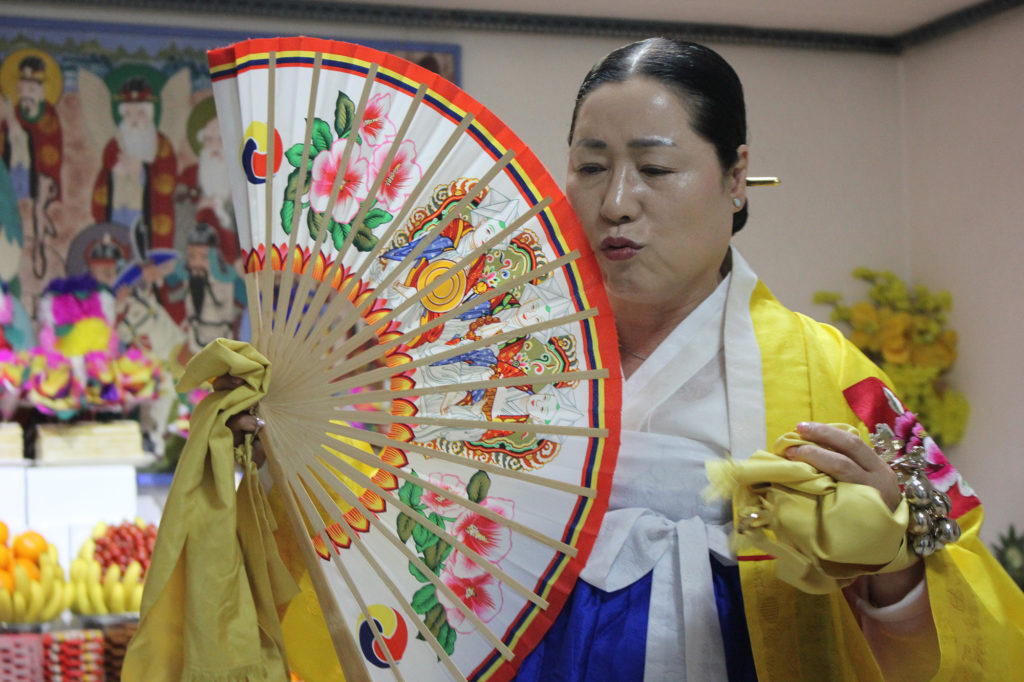 With political instability and an economic downturn, Koreans are turning to traditional shamanic ceremonies. (Miranda Mazariegos/GroundTruth)

SEOUL – On the outskirts of Seoul, in the midst of an industrial, largely abandoned area, a winding dirt road leads to a cluster of warehouses that Korean shamans rent out to perform traditional ceremonies. The zone is deserted, and other than the chanting that comes out of the buildings, it is eerily quiet.

Inside one of the warehouses, Lee Ok Sun jumps around the room with her arms extended toward the sky, chanting in Korean. She is asking the gods to descend into the room and transform her into one of them, so she can perform a traditional shamanic ceremony for her client.

A wide array of fruit, candy and traditional Korean foods is set up on an altar against the wall, all lined up as an offering to the gods.

In the far left corner of the spread lies a dead pig, its body covered in a red and gold mantle. In Korean shamanism, the pig represents the Earth, but because it can deliver several piglets in a litter, it’s also symbolic of richness and fortune.

Though an ancient religion, Korean shamanism remains an important practice in South Korea, where its popularity grows as economic uncertainty and political tensions plague the country with worry.

Although there is no official report on the number of registered shamans in the country, Cho Sung Jae, head of the Muchun Culture Laboratory, an organization dedicated to the study of shamanism, estimated there are more than 100,000 practicing shamans, almost five times more than in the 1950s.

Lee Ok Sun’s client, Choi, who asked to have her first name kept private, kneels on a small mat on the opposite side of the room, occasionally bowing, yet never uttering a word. The ceremony, referred to as gut, lasts five hours and cost Choi around $15,000. Four shamans were working to ensure Choi’s financial success in her job as an after school engineering tutor.

“In September, you will get a big harvest of fruit, and in the winter, you will get warmth and a nice cup of soup,” Lee Ok Sun says in Korean, metaphorically promising Choi better profits.

For about seven years, Choi has visited shamans when she has concerns about health, business, or her daughter’s education. Her career had been unstable in the last couple of months, as she moved from one job to the next, trying to find her footing. She didn’t want to provide any more details, she was reserved and reluctant to speak to reporters; albeit allowing her picture to be taken.

Although Korea’s GDP has been steadily increasing since the recession in the late 1990s, both youth unemployment and household debt rose to a record high in 2017, leaving many professionals, like Choi, struggling financially.

At the start of the Lunar New Year, Choi sought the shamans’ help hoping that they could help her find a stable job and a good school for her daughter.

Like Choi, many South Koreans visit mudangs, or female shamans, when their lives get frightening or uncertain. Shamans are believed to have the ability to anticipate whether there’s any misfortune in a client’s future and with the help of the gods, they can remove bad luck and pave an easier path towards the client’s goals. By reincarnating various gods during the ceremony, mudangs provide advice on the particular concerns responsible for someone’s visit.

“As the economy goes into a downturn, there are a lot of people who come to visit us to counsel their lives. They [also come] when there’s a season for going to university…or when someone is sick and the treatment isn’t working,” Lee Sung-jae, one of the shamans at Choi’s gut and the chairman of the Kyungsin Federation for Shamanism, said through a translator.

During Choi’s gut one of the shamans hoists the dead pig over her shoulders and steps barefoot on recently sharpened blades. The shaman is believed to have incarnated a god, hence her ability to both stand on the blades unhurt and counsel Choi on her next business move.

The shaman advises Choi to sell her house and move to a different part of Seoul, where she could find a new office. There, the gods predicted she would get more students to tutor, and therefore, more profits.

“Sometimes, good riddance comes fast, but sometimes it might take longer,” Choi said, “But I keep [coming] because it feels good.”

Choi places money on a tray as Lee Ok Sun balances it on her head, an offering to the gods.

Throughout the ceremony, Choi pulls out wads of money from her purse and hands them to the shamans, who then place the bills on the shrine. Choi had already paid $15,000 for her ceremony, but the greater the offering, the better the fortune.

Choi’s ceremony was on the cheaper side, as guts often start at $5,000 and can go up to $50,000 for the largest one, which is performed over two days. Therefore, people seeking shamans are predominantly middle and upper class, although some shamans will offer free ceremonies for those who cannot afford one.

In order to become a shaman, a person must receive a sign from God that comes in various stages.

First, that person’s life has to be getting increasingly harder, eventually leaving them unable to eat or sleep. Then they start seeing visions of God in different animal forms. Finally, they develop a mysterious illness that conventional doctors are unable to diagnose.

For Lee Ok Sun, it was seeing and hearing things that others did not.

“I knew since I was five years old,” she said, “but when I turned 25, I got very sick; and [since] you become very sick after you get God’s soul into your body, I became a shaman at 27.”

Many of those who get the signs think they are mentally ill, so they go to a psychiatrist first. If they can’t help, then the person must seek advice from shamanic federations, such as Kyungsin, where Lee Sung-jae says veteran shamans can recognize when symptoms are signs from the gods or a conventional mental illness.

“That’s why they first tend to go to mental hospitals, and some of them, of course, are crazy persons. But, others are rather destined to be shamans; so, when they come here, I can check and know whether it’s a sign from God or not,” Lee Sung-jae said

.However, Cho, the head of the Muchun Culture Laboratory, said that lately, many fraudulent shamans have been performing ceremonies without receiving said signals from God, turning an ancient religion into a career instead.

“Since [the] unemployment rate in Korea has been going up, there are many old people who got fired from their jobs. So, people consider shamanism as some sort of job or career, the money matters [to] them. It’s a social problem,” Cho said.

As economic and political tensions in South Korea rise, shamans take advantage of the influx of clients worried about their future. In fact, Lee Sung-jae said the Kyungsin Federation saw an increase in visitors last year due to the threat of a war between North Korea and the United States.

“When the tension [between North and South] was escalating, when Trump was threatening North Korea, people come here and asked whether or not there would be a war…but no no, there will not be a war,” Lee Sung-jae said.

At the end of the ceremony, Lee Sung-jae grabs a knife and sets it horizontally on the shrine. If it balances itself, it means the gods have been receptive towards the shamans’ request, but if it falls, the success of the ceremony would be uncertain.

A moment of anxious silence passes as Choi watches Lee Sung-jae try to balance the knife. It stands perfectly upright.

“This year will be the sunny day after the rain,” Lee Sung-jae promises. “We did our best to bless you.”