Amid COVID-19 uncertainty, Rwanda comes together (virtually) to remember the genocide 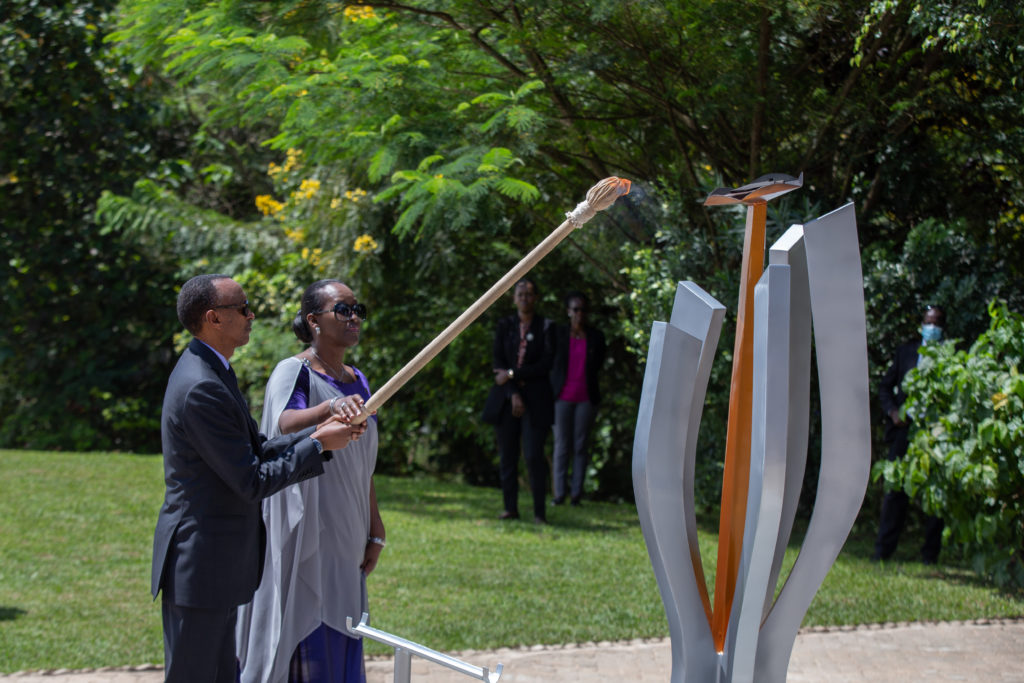 President of the Republic of Rwanda Paul Kagame and his First Lady Jeanette Kagame light the flame of hope during the Kwibuka 26 ceremony in commemoration of the 26-year anniversary of the Rwandan Genocide. April 7, 2020. (Photo by Bizimana Jean/GroundTruth)

Nothing will keep Rwanda from remembering the atrocities that transpired there 26 years ago. But in the age of COVID-19, the form of that remembrance must change.

That was President Paul Kagame’s message Tuesday as the country commemorated the start of the 1994 genocide in isolation. Rwanda’s extraordinary lockdown measures to stop the spread of coronavirus are taking their own toll after the country was the first in sub-Saharan Africa to order a total shutdown and police and military were deployed across the country to ensure people stayed inside their homes. Every evening, the local news relays stories of people who’ve been arrested and thrown in jail for violating the social distancing mandate.

A short, televised address and 10-minute ceremony to lay white roses and light the Kwibuka (a flame of hope that will burn for 100 days) replaced what was for decades a week of commemoration that starts with thousands of people participating in a Walk to Remember, from Rwanda’s parliament to a packed national football stadium, where a night vigil is held to honor the more than one million people killed.

While most Rwandans had no choice but to follow Tuesday’s events live on television or via social media from their homes, Bizimana Jean, a photographer for Reuters, was there in person, as part of a small delegation accompanying the president. To get to the Kigali Genocide Memorial Center, he traveled on deserted city streets, feeling an eerie calm that belied the chaos and fear hidden behind closed doors.

For many, it’s a feeling reminiscent of the genocide.

“It’s like those days,” said Bizimana. “For other countries with empty streets, this might be a first time for them. But in Rwanda, we have experienced days like this.”

Bizimana was just two-years-old when he lost both his parents in the genocide. Found by people living on the Rwanda-DRC border, he was then transferred into the care of an orphanage in the foothills of the Virunga mountains with the help of the Red Cross. There, he and other children had an opportunity to learn photography from Through the Eyes of Children, an organization  that inspired him — and two of his orphanage brothers, Gadi Habumugisha and Mussa Uwitonze — to pursue photography professionally. Now leading the organization that taught them, the three men are inspiring a new generation of post-genocidal reconciliation and forgiveness in Rwanda by bringing together the children of genocide survivors and the children of genocide perpetrators for photo workshops.

“It’s hate that leads to violence,” said Gadi. “This is a way for us to help young people build good relationships so that hate doesn’t start again.”

From his home in Musanze, a district in Rwanda’s northern province, Gadi sat with his wife and two-year-old son, participating in the commemoration activities the only way he could — from the couch, on television and online.

“Watching things on TV gives us a feeling of togetherness again, even if we’re far away from each other,” he said.

As Gadi grapples with the gravity of this pandemic moment — over 83,000 coronavirus deaths in 184 countries so far — the numbers, for him, reinforce the scale of Rwanda’s 1994 tragedy.

“The genocide in Rwanda was something huge…and the [COVID-19] numbers worldwide still haven’t reached the number of people killed in Rwanda,” Gadi said.

In 100 days — between April 7th and July 15th 1994 — ethnic Hutu extremists targeted and slaughtered members of the minority Tutsi community, as well as their political opponents (regardless of their ethnic origin). More than one million people were killed, including about 70% of the country’s Tutsi population. Even today, that number continues to grow.

On Sunday, authorities announced the discovery of a new mass grave that may contain as many as 30,000 Tutsi bodies. Smaller mass graves are found with sickening regularity in the country but this discovery, because of its size and proximity to Kigali, is considered the most significant in years. The coronavirus pandemic is making it difficult to exhume the bodies, causing more heartache for survivors eager to give their loved ones a proper burial.

As  people around the world are stricken by grief, coronavirus is forcing a difficult reality: death without funerals.  In the U.S., the Centers for Disease Control and Prevention has already recommended that families hold “virtual” funerals to limit the number of people in attendance. In Rwanda, funerals are not yet banned, as they are in Italy, but the government has limited funeral gatherings to ten people.

For Gadi, that makes mourning the loss of a friend particularly difficult. This week, his former classmate, 29-year-old Karuranga Virgile, known widely as DJ Miller, died of a stroke unrelated to coronavirus.  DJ Miller was one of the biggest names in Rwandan entertainment, and in any other time, people would have come from far and wide for a mourning period called ikiriyo to pay their respects to his wife and six-month-old daughter.

When DJ Miller was laid to rest today, the ceremony was live streamed on YouTube. Gadi watched, “but still, it’s not the same,” he said. “It’s not the same… he was such a wonderful friend.”

There are currently 105 cases of COVID-19 in Rwanda — all in the capital city, Kigali, where Mussa and Bizimana live. Seven people have recovered.  No one has died. A toll free hotline — 114 —has been set up for Rwandans experiencing symptoms. For people who want to reach a medical professional, The Ministry of Health is using WhatsApp, the most popular messaging app in Africa.

“In Rwanda, everyone is shocked,” said Mussa. “When I heard of it [COVID-19], it was in China. It was far away. Could it reach Rwanda? Actually, we were just joking, saying, ‘Ah, it’s in China, it’s for China. It’s far, far away.’ And when we heard that it had reached Rwanda, it was very shocking… To me, it’s like a war is happening.”

COVID-19 measures in Rwanda have shut down all air travel and all travel between the country’s 30 districts (which are equivalent to U.S. states but more akin in size to small counties). In order to leave their homes, Rwandans must have written permission from a local government minister and the police, and even with that approval, travel is restricted to within the district of residence.

Mussa obtained that permission last week to take his newborn son to a doctor’s appointment, and again two days ago to retrieve his laptop from the office. In the 20-minute drive from his home, he was stopped by police four times.

“If I was driving without permission or without a proper explanation, they can take away my driver’s license and even take my car. That’s one of the punishments,” Mussa said. “Or I could even be in prison for a day. That’s how serious they are.”

The enormity of Rwanda’s past suffering is why, he believes, most Rwandans are taking quarantine measures so seriously and why the message of looking out for one another resonates so deeply.

“It reminds me of my parents,” Mussa says, reflecting on the genocide that took his mother and father.