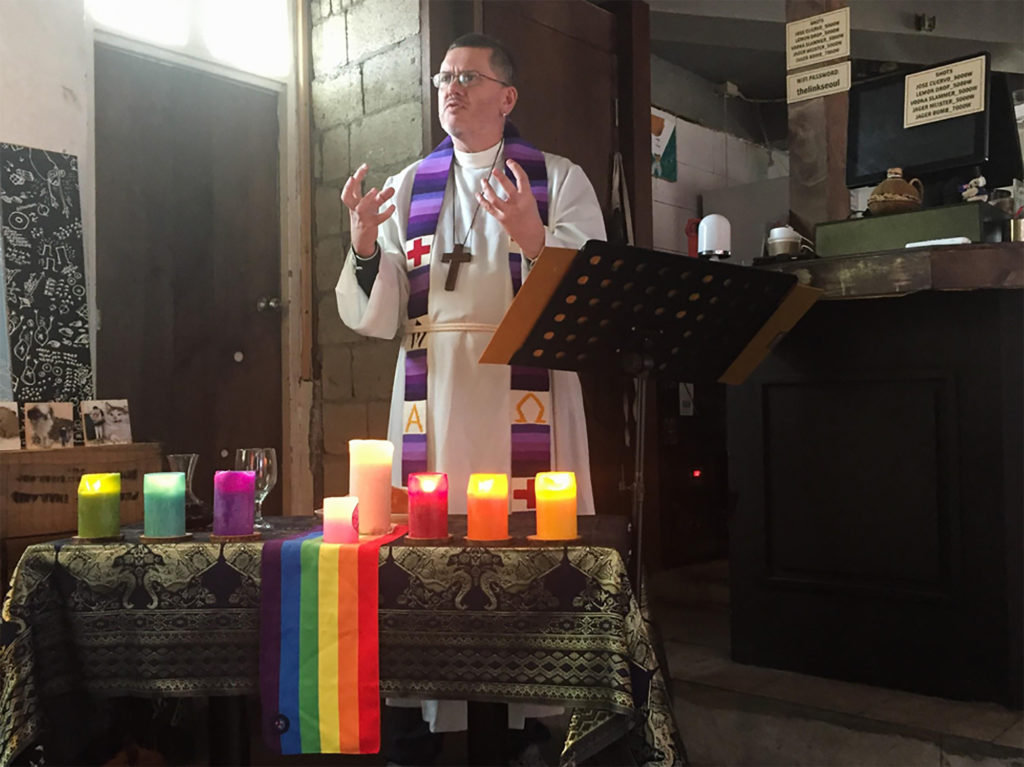 SEOUL — As service begins at Open Doors Metropolitan Church, about a dozen members draw up chairs and sprawl across couches in the makeshift space that serves as a gay bar by night, coffeeshop by day, and worship space on Sunday mornings. The pastor, Craig Bartlett, stands behind a small coffee table which he has set with rainbow-colored candles and draped with a rainbow flag. He begins the service the way he always does — with a statement of affirmation for the LGBT community: “We extend a radical welcome and affirmation to everyone, regardless or age, race or ethnicity, sexual orientation, gender identity, relationship status, socioeconomic status, political status – whatever status.”

A young gay Korean man, whom asked to be called Jason to protect his privacy, sat down on a couch with his boyfriend, who had wrapped his arm around him.

Open Doors is a member of Metropolitan Community Churches, a Protestant denomination founded in the United States in 1968, and the first church to perform same-sex marriages in the United States. It is one of the few LGBT-affirming churches in South Korea, offering LGBT Koreans a way to practice their faith without hiding their sexual or gender identity.

According to sociologist of religion professor Sung Gun Kim, LGBT rights are a “very sensitive political issue” in South Korea and are “still fiercely debated.” Kim says the vast majority of Korean Protestants are conservative, and hold strong negative views about homosexuality.

Changing attitudes in Korea, but not among Protestants

Jason has attended Open Doors with his boyfriend for the past five years. Jason grew up on Jeju Island, a resort island off the southern coast of South Korea with a population of about 600,000 people, where he attended church regularly. Jason says Jeju Island has “many churches, but not any LGBT-affirming churches.”

“I grew up in a very conservative church, and after realizing I’m gay, I wasn’t sure about going back because I didn’t know how [other members would] react. I wanted to be able to attend with my boyfriend,” he said. When asked what would happen if he attended a Korean megachurch with his boyfriend, he laughed, then said, “If they realized that we are not heterosexual, people would definitely talk, I’m sure they would not hesitate to express their disgust and say hostile things.”

Support for LGBT rights among Korea’s general population is increasing, according to a survey by the Asan Institute for Policy Studies. Almost a quarter of respondents said they had no reservations about homosexuality in 2014, compared to 16 percent in 2010. Similarly, the number of Koreans who support the legalization of same-sex marriage rose from 17 percent in 2010 to just over 25 percent in 2014. However, support for LGBT rights was divided by religious affiliation — seven out of 10 Protestants “had reservations” about LGBT issues, while about half of those without a religious affiliation said they had reservations. In the United States, most religious groups now support same-sex marriage, with 63 percent of mainline Protestants in support.

Advocacy by LGBT-affirming church: “their involvement is what counts”

Open Doors is led by Pastor Craig Bartlett, a straight Canadian man married to a Korean woman. Bartlett originally came to South Korea to teach English in 1997. He took over leadership of Open Doors in 2016.

Bartlett believes that the Christian churches’ active stance against homosexuality may perpetuate the belief among Koreans that being a Christian and a member of the LGBT community are mutually exclusive.

“Like many other [countries], people will say either you’re queer, or you’re Christian, and you can’t be both. That is always an issue in the queer community, but here in Korea doubly so, because conservative Christianity is so muscular in this country,” he said.

Reverend Bora Lim at the Presbyterian Hyanglin Seomdol congregation, the only LGBT-affirming Presbyterian congregation in Korea, says she also sees LGBT Christians who formerly abandoned their religion at her own church. In addition to work with her own congregation, Lim distributes materials about the LGBT community, and is currently working to translate The Queer Bible Commentary into Korean.

Lim estimates that out of her congregation of around 60 members, at least one-third of them are part of the LGBT community.

“An affirming church is very important for LGBT Christians, and secondly, for the congregation to know there are many different types of people,” she said.“There are so many Christian LGBT individuals in Korea. They grew up in a Christian family background, but when they know their sexual identity or sexual orientation, most of them stop going to church for worship because usually a church will say homosexuality is a sin. So, they lose their religion.”

This was the case for transgender activist Edhi Park. Through a translator, she explained she left the church after realizing her gender identity.

“I went to church since I was very young, then realized the church wouldn’t accept me as I am. I lost interest in the religion and then gave up on the belief,” she said. “I felt very empty, because the church had been part of my life for a long time, and I knew that after I transitioned I could not go back to the church.”

She is now a member of Open Doors Church.

Kang Myeong Jin, chief organizer of the Korea Queer Culture Festival, says advocacy from Korean churches demonstrates to LGBT Koreans that Christianity as a whole isn’t against them.

“From a quantity perspective, there aren’t that many [LGBT-affirming] churches, but their involvement is what counts,” Jin said. “Whenever there is an anti-LGBTQ protest, [the affirming churches] actually participate against the protestors, so they are giving to our community very clear message that it is not always the LGBT community versus religion,” he said.

These advocacy efforts also help show LGBT Christians that there is a church for them – Edhi Park first discovered Open Doors through the church’s involvement with the Korea Queer Culture Festival.

For Rev. Lim, who has participated in the Korea Queer Culture Festival with Sumdol Church since 2014, advocacy efforts provide an opportunity to show solidarity with the LGBT community.

“Many Koreans think that all the churches are against LGBT [people], but this is not true. Christianity should not be a religion of hatred or discrimination,” she said.