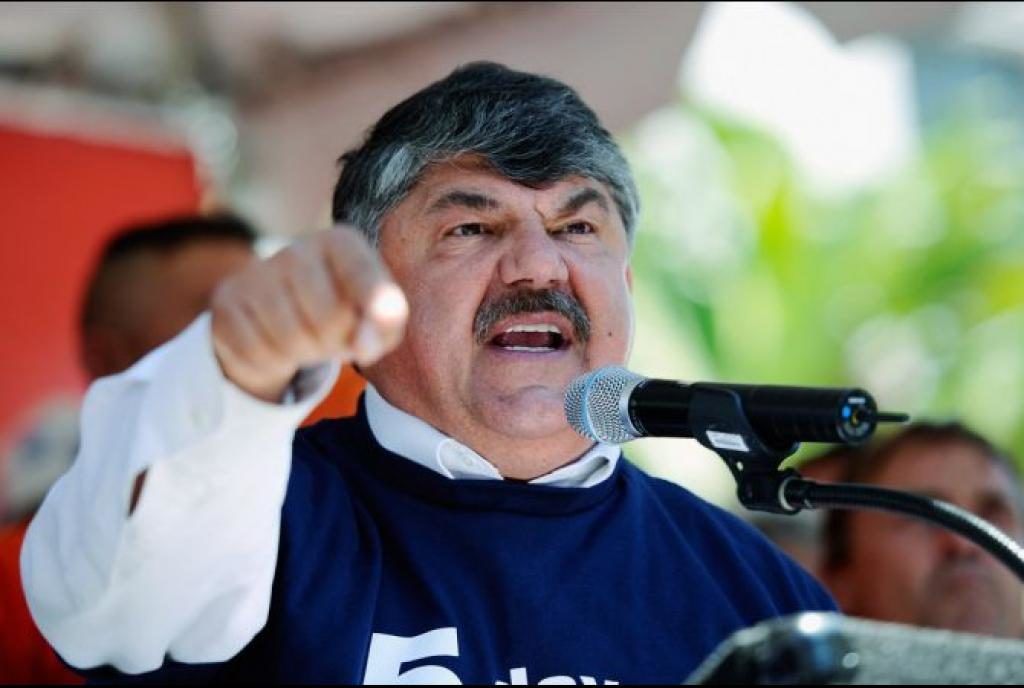 BOGOTA, Colombia – On April 19 a death squad called the Black Eagles dumped hundreds of pamphlets on the steps of the Roman Catholic Church in Puente Sogamoso, a farm town in northern Colombia where union activists are trying to organize palm oil workers.

The flyers accused the union leaders of having ties to Marxist guerrillas and warned: “Start digging your graves and preparing your coffins because from this moment forward you are military targets.”

But instead of fleeing, the union leaders called Rhett Doumitt, an American who directs the Colombia and Venezuela office of the Solidarity Center, the international cooperation arm of the AFL-CIO. Doumitt arranged for them to travel to Bogota for meetings at the Labor Ministry and the US Embassy. Their lobbying paid off: Last week, the Colombian government assigned bodyguards to the threatened men.

The Solidarity Center’s work in Colombia illustrates how organized labor in the United States — which has often viewed foreign workers as job-stealing foes — is increasingly collaborating with overseas labor activists to strengthen unions and help workers combat the cruelties of the global economy.

One of the most vexing problems is the so-called “race to the bottom,” in which employment gravitates towards countries offering multinationals the worst wages and working conditions. To combat corporate globalization, many American workers are now embracing labor globalization.

The idea is to raise the floor. That means pushing to improve farm, factory and shop conditions everywhere in order to stop job migration to countries with the most abusive sweatshops. Better living standard can, in turn, lead to increased demand for US goods.

“Faced with a choice of reducing our wages or bringing up overseas wages, it is in our interest to do the latter,” said Ben Davis, director of international affairs for the United Steelworkers, known as USW. “It’s solidarity but it’s built firmly on a platform of self-interest.”

USW, for example, has forged strong ties to Mexico’s mineworkers union. Organized labor in Mexico is dominated by pro-business unions that work in cahoots with companies to suppress wages. Amid this backdrop, USW has helped the mineworkers organize independent affiliates. The mineworkers, in turn, have held work stoppages in solidarity with USW strikes north of the border.

A handful of US lawmakers are also getting involved. During negotiations for a free trade agreement with Colombia, several legislators helped secure a side agreement to the trade pact designed to improve worker rights.

Among them was Rep. Sander Levin (D-Mich.). A former labor lawyer, Levin recalled hearing horror stories about United Fruit Company banana plantations from his father who served as an honorary general counsel to Honduras. Levin became more aware of the plight of overseas workers in the late 1970s when he served as assistant administrator of the US Agency for International Development (USAID).

“Some people don’t understand why the American labor movement has become so involved in other countries,” Levin told GlobalPost. “But improved worker rights are extremely important for helping countries address inequalities and build up their middle class.”

For American workers, the wake-up call came in 1993 with the ratification of the North American Free Trade Agreement, or NAFTA. Many studies show that the trade pact accelerated the shift of US factory jobs south of the border, an outflow famously described by Ross Perot as a “giant sucking sound.”

Soon afterward came the emergence of China, with its rock-bottom wages and dearth of worker rights, as well as new US trade agreements with Central America, Chile, Singapore, Korea, Australia and other nations. These developments prompted more international travel by American labor activists as well as the arrival of foreign labor delegations to the United States as working men and women tried to come up with a unified response.

“Trade pacts have made people a lot more aware of global labor issues,” Rep. Jim McGovern (D-Mass), who has focused on labor rights issues in Latin America for much of his career, told GlobalPost.

Davis, of the USW, points to how industry-wide master agreements negotiated by unions covering auto, paper and other sectors in the United States were designed, in part, to prevent factories in different parts of the country from competing against one another.

A similar concept might be applied globally to help prevent the race to the bottom. But due to differences in law, language and culture, there are no true global unions that can bargain collectively for workers for the same multinational companies in different countries.

Davis said about the only place where global collective bargaining has worked is for maritime employees affiliated with the International Transport Workers’ Federation. Wages, health and safety standards for maritime workers, who are extremely vulnerable because they are on isolated ships at sea for long periods, are checked by port inspectors.

“They have real leverage,” Davis said. “If the workers don’t get paid, the ship doesn’t get unloaded.”

Kim Scipes, a labor historian at Purdue University North Central, points out that globalization has affected workers for centuries. Even in the 1800s, some jobs were mobile and companies could divide workers. To break strikes by French printing press workers, Scipes said, the task could be outsourced to English printers.

Examining these cross-border impacts, Karl Marx and Friedrich Engels foresaw the excesses of modern multinationals. In 1848, they argued that workers should forget about borders and national citizenship and view themselves as part of a global class of workers that could form a bulwark against the ravages of capitalism. Or, in the words of the Communist Manifesto: “Workers of the world, unite!”

But all too often, big labor in the United States has focused on domination rather than solidarity.

Samuel Gompers, who in 1886 founded the American Federation of Labor – which later became the AFL-CIO – was an infamous racist who lobbied to keep Chinese workers out of the United States. Gompers helped form the short-lived Pan American Federation of Labor but the group was more an attempt to bring Latin American unions under AFL control than an exercise in international cooperation, according to Scipes.

During the Cold War, the AFL-CIO was led by George Meany, a fierce anti-communist who supported the Vietnam War and allowed his international delegates to cooperate with the US government to undermine left-leaning governments and labor unions.

From 1971 to 1973, for example, the AFL-CIO’s American Institute for Free Labor Development (AIFLD), channeled millions of dollars to right-wing unions and political parties opposed to Chilean President Salvador Allende, a socialist. The ensuing unrest provided the pretext for the 1973 coup that ousted Allende and opened the door to Gen. Augusto Pinochet’s repressive 17-year dictatorship.

After reviewing hundreds of previously secret AFL-CIO internal documents in 2003, Tom Shorrock wrote in The Nation that “it’s impossible to avoid the conclusion that the AFL-CIO and its institutes were, in a few egregious cases, willing handmaidens for the Pentagon and US multinational corporations as they imposed their will on US allies and developing countries.”

Amid growing opposition from rank-and-file workers, the Cold Warriors were ousted in the AFL-CIO’s first open balloting in 1995 in which John Sweeney was elected president. He shut down the notorious AIFLD and opened the Solidarity Center, whose staff has dropped the ideological litmus tests in favor of forging true alliances with overseas labor unions.

Still, the vast majority of the Solidarity Center’s budget comes from US government bodies like the Agency for International Development and the National Endowment for Democracy. As a result, its staffers have faced unsubstantiated claims of plotting against left-wing governments and unions in places like Venezuela and Nicaragua.

“We get attacked from the right and the left,” said one Solidarity Center activist who requested anonymity. “There’s this line of thought that goes: ‘You did this back in the Cold War so you must be doing it now.’”

But here in Colombia, Doumitt and his Solidarity Center team are viewed by local unions as valuable partners. They are constantly prodding Colombian officials to enforce labor regulations and traveling to dangerous areas of the country to support threatened unionists.

“They have stood side by side with the workers,” said Miguel Conde, one of the union leaders singled out for death by the Black Eagles and who was assigned a pair of bodyguards thanks to Solidarity Center intervention. “Without them, we wouldn’t be here.”