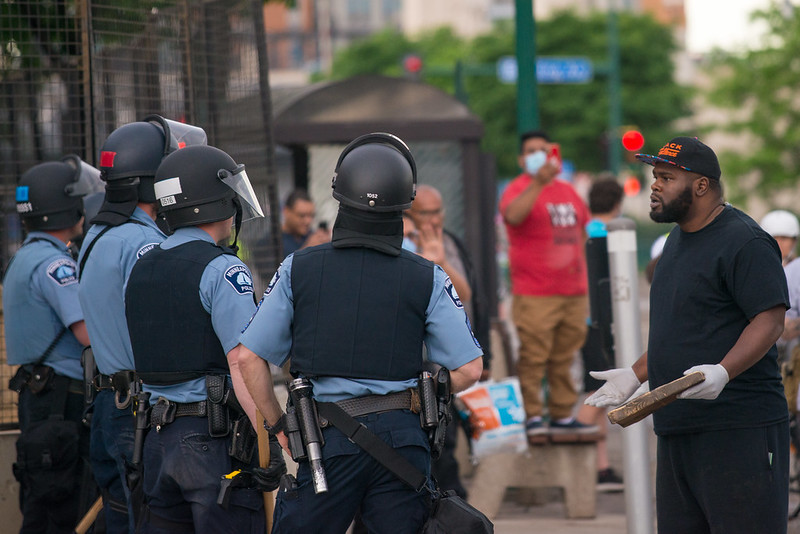 A man exchanges some angry words with the police outside the third precinct in Minneapolis, Minnesota on May 28, 2020. (Photo by Fibonacci Blue/Flickr)

WASHINGTON — America wakes up this morning with cities still smoldering after a weekend of violent protest, in a country that feels increasingly like a warzone.

And for reporters who were on the frontlines covering the unrest, the list of injuries reads like a dispatch from a combat field hospital.

A photographer in Minneapolis is blind in one eye after a police officer’s rubber bullet caught her as she worked. A television producer was thrown to the ground and pepper sprayed in the face by police after showing his press card. A journalist in Long Beach took a rubber bullet to the throat fired by a police officer aiming at him after he finished an interview with a protester. A correspondent was hit by a police projectile while on air in front of the White House. A veteran reporter was zip tied and detained without charges by the NYPD, held in a crowded jail cell with dozens of others without social distancing in the middle of a pandemic.

The list goes on as journalists across the country put their safety on the line to document the historic civil unrest in response to the Minneapolis police killing of George Floyd, an African American man who died with an officer’s knee in his neck.

Officials in 26 states and Washington, D.C. mobilized the National Guard to support police response this weekend, and too often journalists became targets of what Reporters Without Borders called “unprecedented” official and protester violence. The U.S. Press Freedom Tracker, led by the Freedom of the Press Foundation and the Committee to Protect Journalists, said Monday that while it has documented 100-150 press freedom violations in the US annually over the last 3 years, it is “currently investigating *over 100* FROM JUST THE LAST 3 DAYS.”

Journalists sustained this violence at an economically precarious time for their profession and following years of President Donald Trump’s near-daily attacks on the press. Press freedom experts and scholars on authoritarian politics say that leaders’ language of violence begetting actual violence is a standard part of “The Authoritarian’s Playbook,” as GroundTruth reported last year.

“President Trump’s demonization of the media for years has now come to fruition, with both the police and protesters targeting clearly identified journalists with violence and arrests,” said Christophe Deloire, secretary general of Reporters Without Borders. “It has long been obvious that this demonization would lead to physical violence … RSF calls on all United States authorities to ensure the full protection of journalists and honor the country’s founding principles in respecting press freedom.”

Bruce D. Brown, executive director of Reporters Committee for Freedom of the Press, added, “The numerous, targeted attacks that journalists reporting across the country have faced from law enforcement over the last two nights are both reprehensible and clear violations of the First Amendment. These attacks not only endanger our free press, but also threaten our democracy and the essential role that journalists play in safeguarding constitutional rights.”

And while members of the public may debate the value of journalists’ work, in a compound crisis like this one, there is no doubt Americans are benefiting from it.

As Dallas Morning News reporter Dom DiFurio tweeted, “I hope it isn’t completely lost on the public that they get to witness these events from a safe distance because of a press whose members have taken sizable pay cuts and had workloads increased due to layoffs over the last two months and who are being tear gassed and shot at too.”

While journalists have long enjoyed an honored role in the U.S., one protected by the Constitution, these protections are quickly disappearing. And as reporters across the country found this weekend, a PRESS badge seems to now invite violence not shield reporters against it. But reporters will not stop serving the public by reporting on the frontlines to get the news.

Adolfo Guzman-Lopez, the reporter for KPCC and LAist hit by a rubber bullet while on assignment, live tweeted the aftermath with gritted teeth and a bloody neck as he sat in his car before driving to the emergency room.

“I just got hit by a rubber bullet near the bottom of my throat. I had just interviewed a man with my phone at 3rd and Pine and a police officer aimed and shot me in the throat, I saw the bullet bounce onto the street,” Guzman-Lopez wrote.