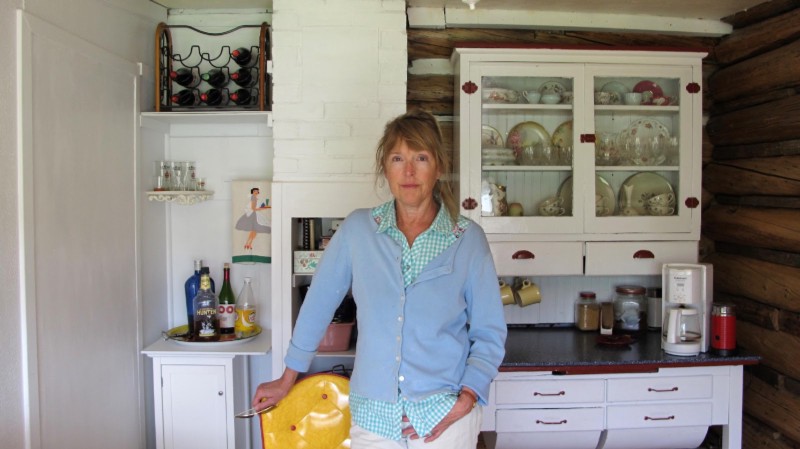 Rancher Kathleen Curry in her kitchen in Gunnison, Colorado. Of those searching for water, Curry says, “They’ll come to these ranches. And they’ll be met with shotguns.” (Photo by Charlotte Weiner/GroundTruth)

GUNNISON, Colorado — For rancher Kathleen Curry, the time for hollow reassurances is over. From her chair at the linoleum-topped kitchen table, she looks out to the view that a wide window frames: a small patch of lawn, a lattice of bleached wooden fence and beyond, hills that rise out of the flat plains, waves of green that fade to parched brown.

A low stretch of woods lines the hills’ base. “Out there,” Curry points a deeply tanned, delicate hand, “that’s the creek, right there, where those woods are.” She draws her gaze back inside. “It’s everything to us.”

Tomichi Creek, which flows into a tributary of the Colorado River, provides the water for the hay that Curry and her husband, Greg Peterson, a fourth-generation rancher, feed their cattle. But Curry says that her faith in maintaining rights to water from the creek is fading.

Once known as the American Nile, the Colorado is now diverted through fields and pumped to kitchen taps; it pools behind hundreds of dams, and flows through concrete channels until it narrows to a steady drip and dries up, miles from the sea into which it once flowed. Ranchers and farmers siphon water from the river for irrigation, while municipal and industrial forces pull water to fuel their cities’ growth. Recreationalists and environmentalists claim water for non-consumptive use, too.

This May was one of the wettest in recent memory in Colorado, but a shift towards warmer, drier temperatures across the Southwest threatens to further deplete the river. The Colorado relies on snowpack — in its headwaters in the Rocky Mountains, and in peaks throughout the basin — that melts and feeds the river. But this spring, the snowpack in Colorado was only two-thirds of its average size. The past fifteen years have seen the lowest average annual snowpack in a century. A 2011 Bureau of Reclamation report predicted that the river’s average annual flow will drop 8.5 percent in the next forty years; other projections cite up to a twenty percent drop, which would amount to a loss of over two million acre-feet of water.

If climate change and growth continue on their projected course, Curry fears that the river system, already overstretched, will become wholly untenable.

Read the rest of this series on Medium – and don’t forget to follow @GroundTruth!