‘All Our Young People Have Gone to the Mountains’ 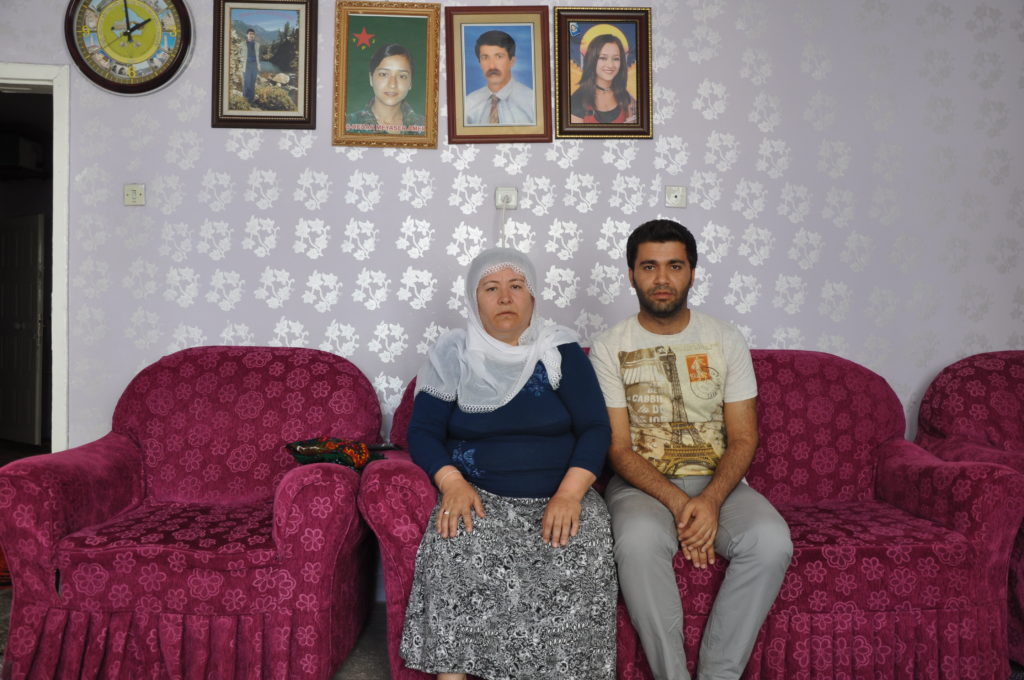 This article was published in partnership with The Atlantic magazine.

Earlier that day in their poor neighborhood in Diyarbakir, the de facto capital of the country’s southeastern Kurdish region, assailants had fatally shot one police officer and injured another. Azat was one of 17 suspects taken into custody.

“He doesn’t even know how to talk or count,” said Cedinkaya when I spoke with him a couple weeks later. “He’s just a boy who was playing outside on the street [at the time of the attack], and they took him to terrorize us. … This is all a part of Turkey’s war against the Kurds.”

That war, in turn, is part of a complex web of regional alliances and existential struggles. Three of the most potent forces in the region today—the rise of ISIS, the Syrian civil war, and political flux in Turkey—have placed the Kurds in an especially precarious position, with consequences for the fate of one of the Middle East’s largest ethnic groups. The durability of Turkish-Kurdish peace and the very future of Turkey are also at stake in the fight.

The day before the shooting in Diyarbakir, two more Turkish police officers were killed near the Syrian border in an attack claimed by the Kurdistan Workers’ Party (PKK), a Marxist-inspired Kurdish separatist group that has been fighting an on-again, off-again insurgency against Turkey since 1984. That conflict has claimed an estimated 40,000 lives.

The shootings of the police officers were retaliation for a July 20 suicide bombing in the border town of Suruc that killed at least 32 people. Many of the victims were youth activists who had been planning to travel to Syria to help rebuild the Kurdish town of Kobani, which has seen intense fighting between Islamic State and Kurdish fighters. While the Islamic State is believed to have been behind the Suruc bombing, the PKK has blamed Turkish officials for collusion in the attack. Turkey’s Kurds have long criticized the government for what they perceive as inaction against ISIS inside the country and along its border. What’s more, many Turkish Kurds accuse the government of supporting the Islamist militants against Kurdish fighters in Syria—an allegation the Turkish government denies.

Turkey has since launched a bombing campaign against PKK rebel bases in the mountains of northern Iraq and southeastern Turkey. According to AFP, nearly 40 members of Turkey’s security forces have died in the latest flare-up of fighting with the group.

Over the past decade, relations between Kurds—a disenfranchised minority that makes up a fifth of Turkey’s population—and the Turkish government have improved dramatically, as both sides have invested in a peace process that aims to bring the protracted conflict to an end. But with a two-year ceasefire now broken, many here fear a further delay in meaningful reconciliation, which leaves people like the Cedinkaya family caught in the crossfire.

At around 40-million strong, the Kurds are the largest stateless ethnic group in the world. They stretch across Turkey, Syria, Iraq, and Iran, and have faced discrimination (and far worse) in all countries.

Ever since the establishment of the Turkish Republic in 1923, the Kurdish minority has sought more rights. After the disintegration of the multiethnic Ottoman Empire, which led to new nation-states but not to a Kurdish one, the republic embarked on a nationalist agenda of “Turkification” that eschewed pluralism. “How happy is the one who says, ‘I am a Turk,’” declared Mustafa Kemal Ataturk, the founder of modern Turkey and object of an enduring national cult of personality. Kurds weren’t able to speak their language in public until 1991. Broadcasting in Kurdish was banned until 2002. In 2013, the government lifted a prohibition on the usage of the letters Q, X, and Y, which appear in the Kurdish but not the Turkish alphabet. To this day, many Kurdish children don’t have access to Kurdish-language education.

In July, Turkey reached a deal with the U.S. to help fight ISIS. It has since concentrated on a two-pronged war that many see as paradoxical.

In Syria, amid the civil war, Syrian Kurds have carved out their own territory with the PKK’s support. Though the PKK is considered a terrorist organization by the United States and the European Union, the U.S. and EU have found an ally in the PKK’s Syrian sister organization, known as the Kurdish People’s Protection Units (YPG). The YPG has proved vital in the international military campaign against the Islamic State, but the Turkish government has long been reluctant to aid the Syrian Kurds for fear that their gains could revive the PKK’s own desire for greater autonomy and threaten Turkey’s territorial integrity.

After the Suruc bombing in July, Turkey finally reached a deal with the United States to help fight the Islamic State, but it has since concentrated more on PKK targets in a two-pronged “anti-terror” war that many see as paradoxical and counterproductive. “There is no difference between PKK and Daesh [ISIS],” Turkish Foreign Minister Mevlut Cavusoglu said last month.

Many accuse Turkish President Recep Tayyip Erdogan of reviving the fight against the PKK in the hopes of appealing to Turkish nationalists who have traditionally opposed the Kurdish minority, and thereby politically engineering his party’s chances of winning elections that could be held soon if a coalition government cannot be formed. In an election in June, widely considered a referendum on Erdogan’s rule, his Justice and Development Party (AKP) was denied a majority in parliament, losing ground to a pro-Kurdish rival, the People’s Democratic Party (HDP), that has widened its base by appealing to Turkey’s minorities, women, and the LGBT community. The HDP’s elected leaders are now being threatened with arrest as the government accuses them of “terrorist links.”

“We refuse to let [Erdogan] drag us into a war for his own politics,” said Omer Onen, the co-head of the HDP’s Diyarbakir branch. Like many Kurds, Onen said he never fought alongside the PKK. But he was jailed in 2009 and spent three years in prison on charges that he was involved with the group and engaged in terrorism. “There’s collective punishment and psychological warfare against Kurds, and the people are scared.”

Erdogan’s is a risky political gamble, warned Steven Cook, a senior fellow for Middle Eastern studies at the Council on Foreign Relations. The Turkish president stands to benefit only to a point.

“The problem is that no one can return to the negotiating table until they exact some blood from the other party,” he said. “Sadly, mostly Kurds—but also Turks—are going to pay a price.”

In Diyarbakir’s Baglar district, almost everyone knows someone who has paid a price. In the past year, many residents have been killed fighting in Syria with the YPG, the PKK’s sister organization, against the Islamic State’s advances.

“You can’t separate the situation for Kurds in Syria from Kurds in Turkey,” said Felek Hayme, clinging to a red butterfly hair clip and green floral scarf that her 24-year-old daughter was wearing when she was killed in a rocket attack in Syria in June. The scarf still reeked of smoke.

“The fight in Syria and the fight in Turkey is a fight for Kurdish dignity,” she argued.

Silan—a girl “more brave than all of the boys,” her mother proudly noted—was detained in 2008 for waving a flag of jailed PKK leader Abdullah Ocalan while participating in an International Women’s Day rally in Diyarbakir. She was later sentenced to six and a half years in prison. She fled before she could be jailed and joined the PKK, later taking up arms alongside the YPG.

“All of our young people, the beautiful ones, the smart ones, have gone to the mountains,” said Hayme, using euphemistic shorthand for joining the PKK. “It’s the only option for them: What else are they going to do here? There’s nothing for the Kurds here. … There’s no dignity.”

Onen, the HDP official, argued that the latest spate of violence between the Turkish government and the Kurds could shape—and scar—a young Kurdish generation whose members feel increasingly frustrated and hopeless. Unemployment is highest in Turkey’s predominately Kurdish southeastern and eastern regions (17 to 24 percent, respectively, compared to a national average of 10 percent in 2014), and many Kurds complain of poor educational opportunities and widespread discrimination.

“We want to give youth another alternative … we don’t want them to only go to the mountain,” he said. “We want them to see they can get more freedom politically. But, of course, proving that is difficult right now.”

A 26-year-old Kurdish medical student, who had gathered with friends at a Diyarbakir café to watch soccer, put it to me like this: “Everyone here has thought about joining the PKK, but there’s not only a war in the mountains. There’s an everyday war in the streets of claiming your rights and … of making something better of yourself,” he told me (he refused to give his name for fear of retribution from his university). “This struggle makes life beautiful because it reminds us of its value … but it always weighs on us.”

It’s a struggle to which Abdullah Demirbas says he’s dedicated his life. The charismatic former municipal mayor in Diyarbakir—who is always quick to mention that The New York Times Magazine profiled him in 2008—has long campaigned for more political and cultural rights for Turkey’s minority groups. In response, Turkish authorities have leveled so many charges against Demirbas that, as The New Yorker reported in January, “His lawyer told him that if he lost every case his combined prison term would be four hundred and eighty-three years.”

As the head of Diyarbakir’s teachers’ union for 18 years, Demirbas fought for a more inclusive national school curriculum. In 2007, he was removed from his post as mayor for further lambasting Turkey’s education system and calling for basic public-service information to be printed in the Kurdish language. He was reinstated as mayor in 2009, but soon afterward spent five months behind bars on what he claimed were trumped-up charges, including supporting a terrorist organization (the PKK).

“How can you invest in people, especially the young who have always known war, if they’re constantly being held down?” he asked last fall while we walked around Sur, the ancient central district of Diyarbakir. He noted that many young people, like his own son seven years earlier, see no other choice than to leave for the mountains.

Demirbas said he remained hopeful for a more democratic and multicultural Turkey, but was worried that a dark period lay ahead. Still, he was confident that his own days behind bars were a thing of the past.

Earlier this month, he was once again arrested.

His wife and other son, who recently finished serving compulsory national military service—an agonizing, existential reality for many Kurds—refused to comment on the case, citing security concerns.

“No one is immune anymore, especially leaders like [Demirbas] who are a source of hope,” said Abdel Selem, the regional secretary for the Diyarbakir branch of the Human Rights Association, a Turkish NGO. “Being Kurdish continues to be a crime, something that needs defending against.”

Cedinkaya, for his part, said he had barely slept for weeks after failing to protect his detained son. He feared his son would be forgotten behind bars like so many others—a haunting fate he never thought would befall his apolitical family.

“We’re just simple people. We haven’t fought a day in our lives. We don’t even go to rallies or protests,” he told me. “We’re just tired … tired of waking up and wishing we were born somewhere else.”