ON THE GROUND IN NELSONVILLE, OH

Against the tide: A small town in Appalachia engineers its revival 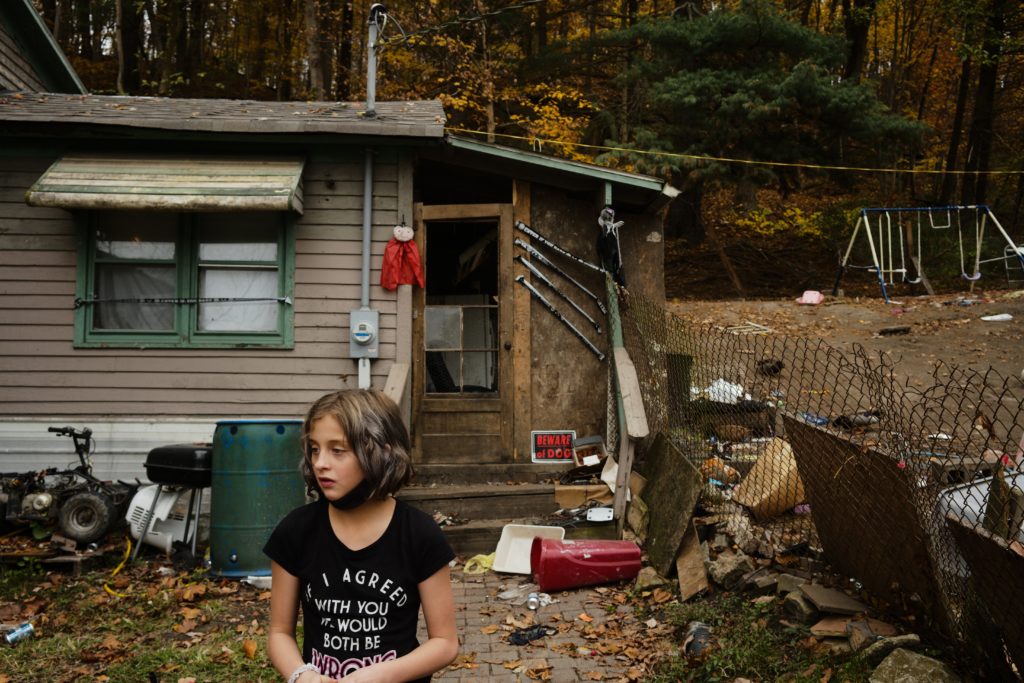 Brooklyn Spangler, 9, stands outside her home on Wednesday, Oct. 28, 2020 in Nelsonville, Ohio. (Photo by Joshua A. Bickel/Columbus Dispatch)

As her neighbor’s kittens ducked between the floorboards, the mother of three cracked a soft smile.

“What’s the best part about raising kids in Nelsonville?” she said. “It’s the small town feel. You know everybody and I like that my kids can walk to their friends’ houses.”

The residents of this former coal mining boom town and one time manufacturing hub don’t subscribe to the narrative that Nelsonville is a relic of the past, doomed to the inevitable decline of rural America, curated by many. And while the pandemic has exposed pre-existing realities plaguing Appalachia— the lack of broadband, infrastructure and health care or the increase of food and news deserts, addiction and homelessness, in a harsh, new light — it’s not the whole story.

Full of rich history, Nelsonville, just 62 miles southeast of Columbus on the northern edge of Athens County, was the first coal town in the Hocking Valley. It was named a Little City of Black Diamonds and famously exported Star Brick, from nearby clay deposits, around the world.

But industry has come and gone.

Coal left southeast Ohio decades ago and the Rocky Brands, Inc., founded in Nelsonville, maintains an outlet store and corporate headquarters, but the shoe factory and its production moved overseas in the 1980s.

Hughes most recently worked at the McDonald’s on East Canal Street, but was fired, she said, when the pandemic forced her to miss work to take care of her kids.

Like so many of its residents, Nelsonville is fighting for its future.

“I always had the impression that there was no going back to what it was,” Taylor Sappington said of the decline in jobs. “But before we had people in office and positions of power who didn’t believe people of Nelsonville had earned a good, fair long life.”

That lack of safety in recent years has worried Hughes, whose six-year-old son found a used needle on the sidewalk just the other week. It’s for such reasons that over a decade ago Hughes and her husband, Jason, moved from their hometown of Glouster, just 12 miles down the road, to Nelsonville.

“We’ve been talking about moving out of state for years,” she said, explaining that her mother’s death strained her desire to stay in the region.

After mounting a progressive campaign challenging Nelsonville’s Republican Ohio State representative Jay Edwards in 2018, and losing, Sappington was unmoored. The 27-year-old redirected his efforts to city hall, finding a partner-in-governance in Scott Frank.

Frank, 39, grew up in Nelsonville and recently moved back home in 2019 after retiring from the Air Force.

“I really hated the condition of the town,” Frank said. “Nothing looked like a hard fix, it just seemed like complacency had set in.”

On a whim, Frank offered to run for city manager — a job few apply for. City Council appointed him in February, right before COVID-19 exploded and Nelsonville’s former deputy auditor was indicted on multiple felony charges for allegedly stealing $40,000 from the city, The Athens Messenger reported.

And Sappington and Frank are done with problems.

They hired a new police chief, Scott Fitch, and replaced 60% of the force after years of apathy and blatant racism plagued the department, and little attention was paid to the city’s growing drug epidemic.

“Crime was rampant — it was just a free for all,” Frank said. “I was thinking to myself, what the hell happened?”

Betty Jo Parsley, president of the Nelsonville Planning Commission, has lived in Nelsonville her entire life. A former reporter for the Athens Messenger, Logan Daily News and now defunct Nelsonville Tribune, the 75-year-old never missed a city council meeting before the pandemic.

Parsley is adamant the city needs change, but is frustrated by Appalachian stereotypes that depict Nelsonville as a town stuck in an impoverished rut.

“It’s not fair,” she said. “We haven’t given up. You can always present negatives, but it only makes me want to work harder.”

From drive-thru to bedroom community

On Oct. 1, 2013, the Route 33 Nelsonville Bypass opened, a $200-million project aimed at expanding southeast Ohio’s access from the West Virginia and Kentucky borders all the way through Columbus, redirecting traffic outside of Nelsonville’s city limits and onto a newly paved four-lane highway.

“Perhaps instead of calling this the Nelsonville bypass, we should rename it the Appalachian gateway,” former Ohio Gov. Ted Strickland told The Columbus Dispatch in 2009.

When the bypass opened, The Dispatch reported that “officials at the ribbon-cutting predicted that Nelsonville would benefit when the trucks and other through traffic clear from Business Rt. 33, or Canal Street, and the community of nearly 5,400 people becomes quieter and quainter.”

“You would have to be very foolish to discount that the bypass has not affected our business,” Parsley said.

Storefronts along Canal Street and boutiques near the Public Square closed up after traffic trickled and commuters eager to reach their destinations faster were no longer forced to drive through Nelsonville.

“But people have found their way to us again,” Parsley said. “Rocky attracts a lot of visitors.”

Mike Brooks, former CEO and current chairman to the board of Rock Brands Inc., took over the company from his father back in the 1970s and lives in Nelsonville with his wife. They play a critical role in supporting the arts, Parsley explained, and donate their time and money to Nelsonville’s revival and survival. His son, Jason, is CEO now but Mike Brooks is attentive to the company and the town’s intertwined relationship.

“Yes, [Route] 33 changed the way we do business,” Sappington said, “But there’s a practical difference, a mentality shift, ‘Oh we can be something else besides a drive-thru.’”

Brooks agrees that Route 33 hurt the community to some degree, but that it may have attracted future employees to Rocky.

When the company stopped making shoes decades ago, Rocky turned its former factory into an outlet store and built its corporate office next door, employing 298 people and sending tax dollars to the city, he said.

But not many of those employees live in Nelsonville, Brooks added.

Jason Brooks explained the state never promised the bypass would turn the former manufacturing hub into a bedroom community, in which folks with jobs in nearby Logan or even in Columbus could more easily live in Nelsonville and commute to work.

In order to capitalize on Nelsonville’s tourist appeal, Sappington said, the city needs to address its transient rental population — over 1,000 of the 1,800 houses in the city are rentals. That disparity solidified over the last 20 years as nearby Hocking College built more dorms and there was a student rental vacuum in Nelsonville.

That rental population makes turning Nelsonville into a bedroom community more difficult, both Frank and Sappington said, but the answer may lie in boutique stores, like Jennifer L’Heureux’s Nelsonville Emporium.

Emporium, a jack-of-all-trades shop, sells local artists’ pottery and homegoods, clothing, food, alcohol and more. L’Heureux’s goal has always been to find a way for the business to give back to her community.

“My biggest hope has been from actively participating in our community,” she said. “Why not have those interested in finding living wages, transportation support, etc. use this work program at Emporium?

Even before the store closed in March after COVID-19 struck, the 51-year-old was determined to work with local non-profits and establish Emporium as a “Learn-to-Earn” facility, providing training for high school, college first time workers and the re-entry workforce.

Down the block from Emporium, a small band of volunteers load up a van marked “HIVE On-the-Fly” with boxes of food on a cloudy afternoon in late October.

The HIVE of Nelsonville, a non-profit organization under the umbrella of Ohio’s Integrated Services for Behavioral Health, is dedicated to supporting the city’s children. The non-profit is run by Dottie Fromal, an Appalachian transplant who went to Marietta College decades ago, and who found herself back in southeast Ohio after the 2016 election.

One thing led to another and soon Fromal, 50, became the HIVE Site Lead, securing grant opportunities and partnering with the Athens County Library, Stuart’s Opera House and the local Presbyterian church to fund activities for the kids, like pool passes over the summer.

“The HIVE is making a tremendous difference in the lives of our children,” Fromal said.

On Thursdays Fromal also hosts Nelsonville’s Community Night Dinners, recently on hiatus due to Ohio’s rising COVID-19 cases. And even though COVID-19 forced the HIVE to take their community-building efforts on the road, Fromal remains undeterred.

On one Wednesday afternoon volunteers Madison Donahue and Andrea Reany offer lessons about the Monday Creek watershed in Athens County and quiz kids about animals in exchange for prizes from the HIVE’s treasure chest of snacks and small toys.

“Dottie has been so awesome for these kids,” Lynn Hughes said. “The community dinners have been a huge shift, but because of COVID the HIVE’s closed a lot and the kids are going nuts.”

She does worry about what will happen as her kids outgrow the HIVE and the structure it provides, much like everyone fighting for Nelsonville worries for the city’s future.

The poverty, homelessness, lack of infrastructure and jobs are real. But there isn’t one thing to explain Nelsonville’s decline, nor one solution towards what Sappington and Frank in City Hall hope will be its rebound.

“Scott and I are radicals,” Sappington said. “Having been left behind — there’s no congressperson in the world that could convince me we haven’t been left behind — and faced with these daunting things, we believe that just because somebody’s zip code is 45764 and not 43215 they shouldn’t have 5-10 years of their life shaved off.”

Céilí Doyle covers rural issues for The Columbus Dispatch. This dispatch is part of a series called “On the Ground” with Report for America, an initiative of The GroundTruth Project. Follow her on Twitter: @cadoyle_18. 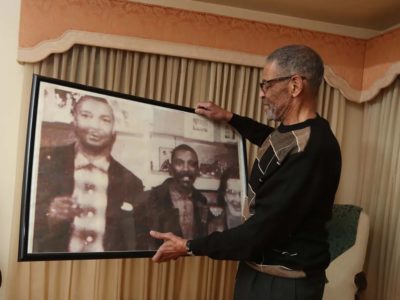