After the collapse of hope, uncertainty and fear for thousands of Afghans 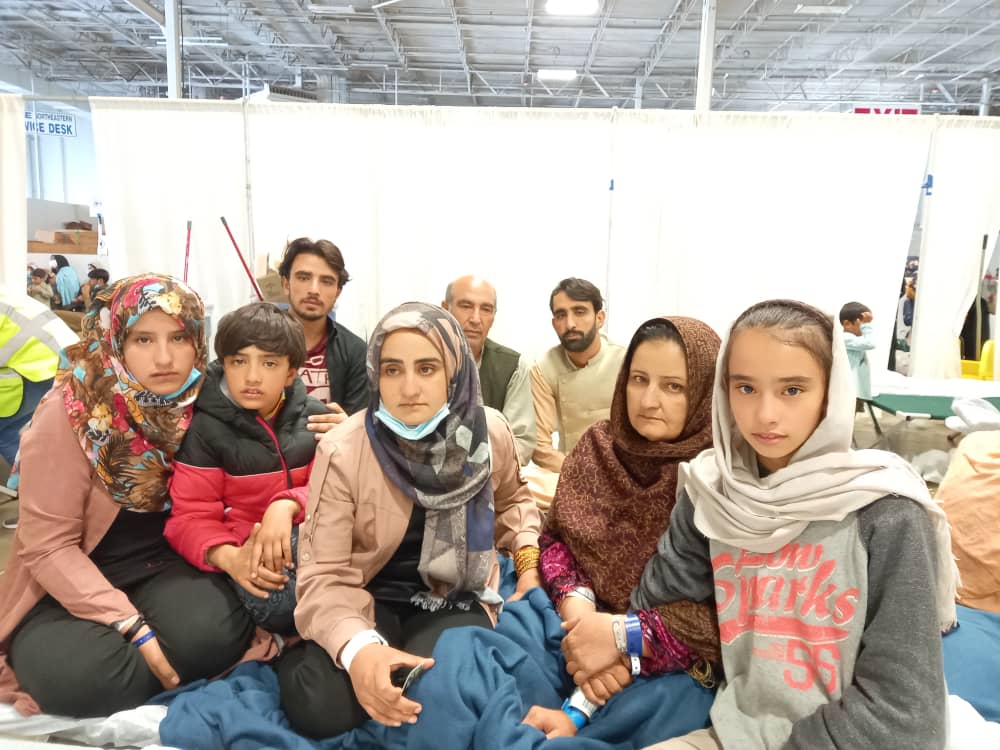 The Sadats, after their arrival at Dulles Expo Center. (Photo by Shaima Sadat)

Editor’s note: This story continues the coverage of the stories of several Afghans featured in our recent story “A collapse of hope , originally published by The Boston Globe on August 21, 2021

The path to freedom was a gauntlet filled with peril and uncertainty, and it’s still not over.

As the family of Shaima Sadat, a principal at a girls’ school in Afghanistan’s Logar Province, prepared to flee, advancing Taliban fighters surrounded the school. Despite threats from the Taliban and a deadly gun battle that engulfed the school, Sadat managed to regroup with her family and plot their escape.

Sadat, her husband and their seven children then split up into three groups and carefully navigated the Taliban-controlled checkpoints on the way to Kabul’s international airport with a distant hope and no real plan for getting out of the country.

They survived several days of crushing crowds, constant gunfire and explosions amid the chaos in front of the airport gate while waiting anxiously to see if their names would appear on a flight manifest. They walked through the Abbey Gate at the Kabul airport just over 24 hours before that exact spot became the scene of a massive suicide bombing that would kill more than 100 Afghans and 13 US service members. It was one of the deadliest days in the history of America’s longest war, just before it came to an end on the eve of the 20th anniversary of the attacks of September 11th, 2001.

After finally getting on a military airlift out of Kabul, the Sadat family went first to Doha where they stayed in the squalor and oppressive heat of a make-shift refugee camp. From Doha, they flew to Germany where they were bunked in a warehouse at a US military base, and then on to Dulles International Airport in Washington DC. At the nearby Dulles Expo Center, they were tested for COVID-19 and given the vaccine. And now they are encamped at a military base in Wisconsin, where they will have to wait for the grinding bureaucracy of the U.S. Refugees Admission Program.

Their odyssey — and the confusion and worry that envelops them — is shared by an estimated 25,000 Afghans who have made it to the United States on Special Immigrant Visas or, like the Sadats, as asylum parolees who are dwelling in a netherworld of bureaucracy and uncertainty about where they will live and how they will build new lives.

The principal’s oldest daughter, Basiqa, who was a teacher in the school where her mother worked, spoke through an interpreter and shared the details of the harrowing journey that would bring the family to Wisconsin. ” While we spoke via WhatsApp, there was applause in the background as a new wave of Afghan refugees arrived into the cavernous Expo Center where she and her family lived for several days on cots and mattresses on the floor.

“We are clapping because they are here and they are alive,” Basiqa said, speaking through an interpreter.

I visited with Shaima and Basiqa Sadat at the end of July, a few weeks before the Taliban’s final push, as part of a reporting trip to Afghanistan. I began reporting on the girls’ school where they worked some 15 years ago, back when it was first dedicated in the memory of Peter Goodrich. He was a software engineer who lived in Sudbury, MA with his wife, Rachel. The couple met at Bates College where he developed an intellectual curiosity for history and religion, which pulled him into studying the Koran. On September 11th, 2001 he boarded United Flight 175 and was killed when the plane was hijacked and crashed into the south tower of the World Trade Center.

Al Qaeda, a terrorist network inspired by Osama bin Laden, a Saudi, claimed responsibility for the attack and the U.S. soon would go to war in Afghanistan to degrade and destroy Al Qaeda, which had been provided sanctuary by the Taliban government in Kabul. The Taliban regime was toppled, Al Qaeda was dispersed, eventually bin Laden would be killed in a US airstrike in neighboring Pakistan in 2010. Out of that long history, the school was erected and would fill up with more than 900 students serving the Mohammad Agha District of the Logar Province.

Goodrich’s mother, Sally, an educator in Vermont, and his father, Don, a lawyer, felt that building a school for girls would be the best way to honor Peter, and they raised more than $250,000 for the cause. A glass case in the school featured a photograph of Peter and a version of the Koran that he studied so intensely, and where he sought out passages that he felt revealed the peaceful message of the prophet Mohammed. Sally passed away 10 years ago after a battle with cancer, but Don has remained in touch with the school and worked tirelessly on behalf of the principal and her family to get them out of Afghanistan as the Afghan military surrendered last month and the government collapsed with stunning speed, giving rise to a return of Taliban rule.

This week, as the world marks the 20th anniversary of the 9-11 attacks, the Taliban will be assembling its government and tightening its grip on power. In Boston, there will be a remembrance at Logan International Airport from where the doomed flights departed that sunny morning of September 11th, 2001. In New York, there will be vigils where the World Trade Center towers once stood and where more than 3,000 souls perished.

At the Pentagon, there will be remembrances of those who died when a third plane was crashed into the building. And in a field in Shanksville,Pennsylvania, people will gather to honor those killed when a fourth hijacked plane that was set to target the Capitol building in DC before the passengers rose up against their hijackers and took the plane down. And there will be a small ceremony at a 9-11 Memorial Garden in Sudbury, MA which is marked by a stone that carries a bronze plaque with the name Peter Morgan Goodrich.

The Sadat family fled Afghanistan with only the clothes on their backs and the documents they would need to build their case for asylum. The principal says she worries obsessively about her teachers and her students and the extended family she left behind.

“The teachers and our students are okay, from what we hear. The school is still closed,” she said.

She was asked if she believed the Taliban has indeed changed as they professed at a first press conference where they said girls education would be permitted “within the framework of Islam?”

“No. They are making promises, but from what I saw and what I am hearing from our neighbors and family back home, they are no different. Just playing it smarter.”

She added, “The Taliban keeps telling people the school will open to give them hope. But I do not have as much hope. I am afraid we will go back 20 years, and that it may even be worse than before because the educated people are all leaving.”

I have also tried to keep in touch with the other Afghans who I interviewed on my July reporting trip, including a small group of young entrepreneurs who struck up a unique conversation over a lunch in downtown Kabul. One of them, a mushroom farmer who supplies local restaurants with his fungi, said he was a supporter of the Taliban but he has not been answering his phone.

A colleague at the trade program for young entrepreneurs, Naserin Aseri, a woman who fashions jewelry out of recycled plastic and sells her wares in local markets, said that she along with just about every woman she knows has rarely left her home since the Taliban returned to power. Her colleague, the mushroom grower, shared in a conversation in late July that he had faith that the Taliban had changed and would accept women going to school and being out of their homes and in the workplace. She had grave doubts about that then, and even more so now.

In an interview this week, she said, “The Taliban has not changed at all. They have not directly restricted us, but women do not dare to go out and work. So far, work and really any activities for women outside of the home are suspended,” she said.

Like the vast majority of Afghan, Aseri said she does not have the resources to try to flee the country and start a new life elsewhere. She said she was stunned by the rapid collapse of the previous Afghan government and the sudden rise of the Taliban.

“I still can’t believe it. It is like a terrible dream,” she added.

An editor of an Afghan newspaper 8AM Daily, Mujib Mehrdad, said he too was stunned by what happened, and said he is still trying to puzzle out how there was such a failure of intelligence by Afghan forces as well as the US and international allies.

“Just no one saw this coming, at least not the way it did and with the speed it did,” said Mehrdad.

He described his own harrowing journey trying to get to the airport to flee the country, but he did not have the good fortune of the Sadat family.

“I was about to get out of the country. I was part of an evacuation list, but it did not happen,” he said.

He explained that he and two colleagues were detained by the Taliban on the streets of Kabul and then taken to a nearby jail and threatened and intimidated by his captors, who told him he would never be released.

“They said “You were the people making up propaganda about us and calling us terrorists on a daily basis,”” he said, recounting the ordeal and explaining that eventually friends who had contacts with Taliban leaders helped him win his release.

“It was a form of mental torture. It was a horrible experience,” he said.”I genuinely thought my life was over in that moment.”

He is now in hiding in his home in Kabul, but his news organization is still doing its best to publish online, at least for as long as it can. He said it was getting harder and harder to imagine that a free press would be allowed to function under the Taliban. And he said he and his wife will continue to try to flee the country because he said he fears for his life, and fears they will have no future in the country.

For those who did make it out, there is relief, but also tremendous uncertainty.

In the crowded warrens of a makeshift refugee camp at Fort McCoy in Wisconsin, where more than 8,000 refugees are being temporarily located, Shaima Sadat was asked what she might have to say to America’s political and military leaders in the aftermath of what many see as a  shameful retreat in the chaotic and bitter end to a 20-year war.

“We were very grateful to America. They helped us so much to educate our girls, to build our schools. But why did they have to leave in this way? Could we have worked together to plan it all better? We cannot help but think about how it could have been different,” she said.