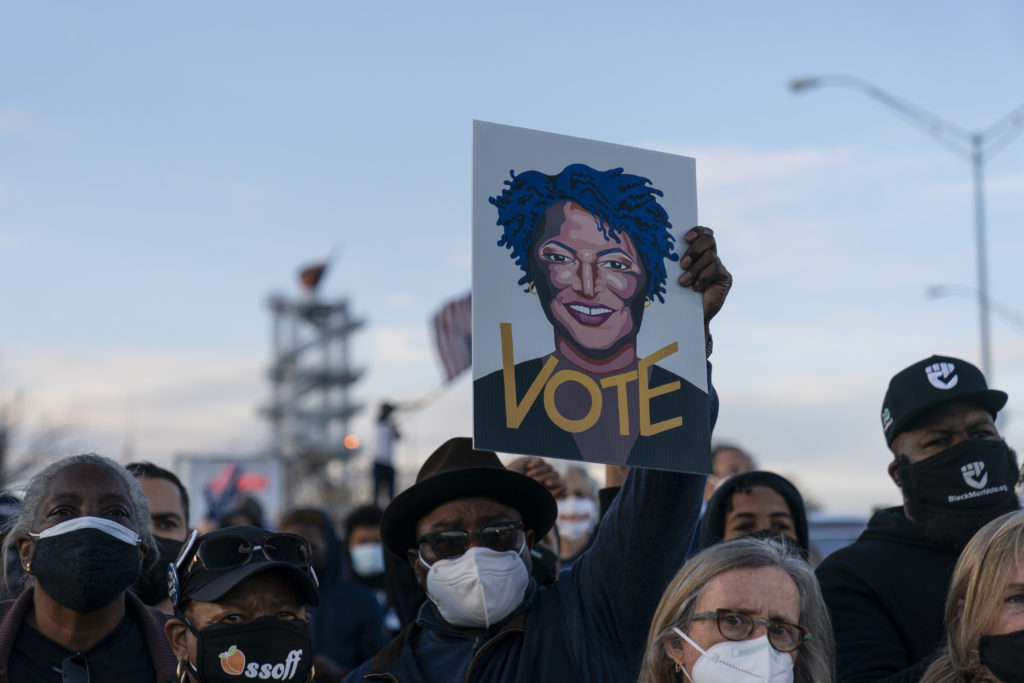 The work of Stacey Abrams and other voting rights advocates has been key to counter disenfranchisement efforts in Georgia. (Photo by AP/Carolyn Kaster)

Historic turnout by a coalition of Black voters joined with Latino, Asian American and young voters drove the victories, orchestrated by Stacey Abrams and a dogged network of voting rights organizers in the face of the pandemic, sweeping voter roll purges and polling place closures.

Abrams, who became the national face of voting rights after a controversial, close gubernatorial loss to Republican Brian Kemp in 2018, tweeted that the win was the culmination of “decades of strategy, grit + building.” The Atlanta Journal Constitution wrote that Democrats celebrated the monumental victory, even as Republicans wondered how they lost a pair of races they led in November.

But the pair of Senate seat wins is more than a mark of organizing success; it’s also a Democratic opportunity. It gives the party full control of Congress for the first time since 2010, and a chance to finally move legislation forward after Republican majority leader Mitch McConnell spent two years burying hundreds of House-approved bills. Among the possibilities: the most comprehensive election reform in at least two decades.

Democratic Speaker of the House Nancy Pelosi (D-California), along with Rep. John Sarbanes (D-Maryland) reintroduced the For the People Act (H.R. 1), a sweeping bill targeting voter suppression, gerrymandering and special interest campaign money, on Monday. Voting rights advocates also say they’re compiling the data they need to advance the John Lewis Voting Rights Advancement Act (H.R. 4), which aims to rewrite a portion of the 1965 Voting Rights Act that was struck down by the U.S. Supreme Court in 2013.

“It’s certainly looking better than it was a couple of days ago with Mitch McConnell in control of the Senate,” said Caren Short, a voting rights attorney at the Southern Poverty Law Center. “Those bills were going nowhere.”

The H.R. 1 re-introduction comes on the heels of the highest turnout since 1900, when women, Asian Americans and many Native Americans were still not legally allowed to vote. Voting rights advocates, though, say the record came in spite of continued voting obstacles.

“That so many Americans had to overcome voter purges, polling place changes, voter ID laws, intimidation, malfunctioning machines, and hours-long waits should shame us as a nation,” said Leigh Chapman, Senior director of the Voting Rights Program of The Leadership Conference on Civil and Human Rights. “[H.R. 1 and H.R. 4] will help everyone access the ballot box. Our democracy works best when everyone participates. More national standards will help prevent all the challenges voters faced in the 2020 election.”

Democratic Senate control only means the bills are more likely to be heard, and doesn’t mean automatic passage. If either were to become law it would have to be approved by a bipartisan majority of 60 Senators to make it around the Senate’s filibuster rules.

Bipartisan support could be difficult for the same reason it’s probably necessary for political stability.

Wednesday’s attack on the U.S. Capitol was just the most violent, visible expression of what polls say is abysmally low Republican trust in the presidential election results. The drama played out alongside an attempt from a small group of Republican legislators to block Biden’s victory as electoral votes were counted in Congress.

Their arguments mirrored those of 100 House Republicans and 12 Republican state attorney generals who signed on to a rejected Supreme Court case last month asking the court to throw out the election results in four battleground states. Including that case, the Trump camp has lost at least 60 post-election lawsuits, according to Democratic attorney Marc Elias, and has yet to offer viable evidence of its voter fraud claims.

It’s frustrating for some advocates who hoped that the rise in absentee and mail voting and nationwide turnout records would drive support for more open voting access, and who are instead being confronted by Republican-controlled legislatures working to roll back ballot box access.

“It seems to have morphed into fuel for the fire of unfounded claims of voter fraud,” said Short. “Those [federal] bills are going to be especially important in the Deep South because of the backlash to more expansive voting opportunities.”

“At a time when our elections and democratic norms are being attacked by bad actors, both foreign and domestic, we need to set a federal standard when it comes to voting,” wrote Nsè Ufot, CEO of the voting rights group The New Georgia Project, in an emailed statement.

The New Georgia Project was part of a network of activist groups including Abrams’ Fair Fight and Black Voters Matter that registered and mobilized voters through mailers, events, thousands of door knockers and, when officials closed polling places or purged voters from rolls, lawsuits.

The newest version of H.R. 1 contains national standards for automatic voter registration and simplified mail voting. Among a long list of other reforms, the massive bill would also strive to prohibit discriminatory voter roll purges, change the redistricting process and provide funding for election reforms.

H.R. 4 is a potentially even more powerful piece of legislation that would restore the preclearance clause of the 1965 Voting Rights Act and require some states, counties and other jurisdictions with a history of voter suppression to have election policy changes pre-approved by the U.S. Department of Justice. The clause was struck down in a 2013 Supreme Court decision that ruled the formula for determining which jurisdictions needed preclearance was out of date.

In a dissenting opinion to the 2013 Supreme Court decision, the late Justice Ruth Bader Ginsberg wrote that: “throwing out preclearance when it has worked and is continuing to work to stop discriminatory changes is like throwing away your umbrella in a rainstorm because you are not getting wet.”

Short says it’s been a stormy seven years since: “They threw away the umbrella. The South has been getting rained on since that decision. While we have been able to fight back, it’s still raining pretty hard.”

The revamped clause could potentially be used to override laws in states like Georgia, whose legislature is already considering tighter restrictions on absentee balloting.

“We are witnessing the politics of sore losers. The job of the Secretary of State, county boards of elections, and legislators is to remove barriers to participation in our democracy. HR 1 and HR 4 will do just that,” wrote Ufot. “In a free society, voting should not be this difficult.”