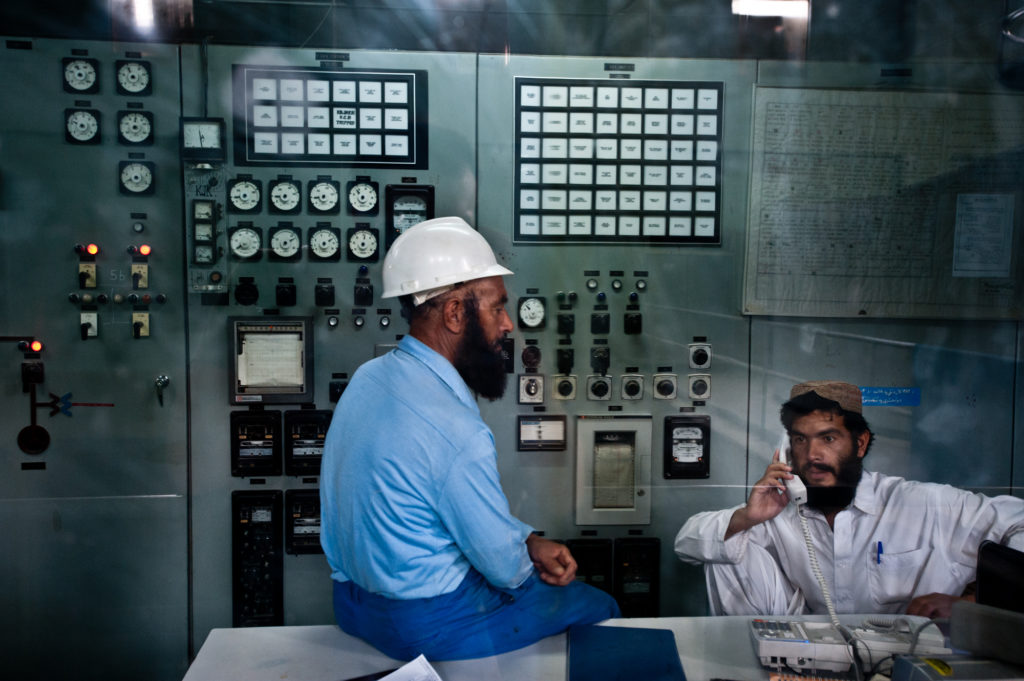 Engineers work in the control room at the Kajaki Hydroelectric Power Plant in Helmand Province. (Photo by Ben Brody)

KAJAKI, Afghanistan — In the shadow of the Kajaki Dam’s towering earthworks, a small, unassuming building discharges two thunderous jets of frothing water into the turquoise Helmand River below.

A maze of wires and cables stretches from the building and retreats buzzing into the surrounding mountains and then into a patchwork of Soviet-era electrical grids that provide intermittent and insufficient power to the region.

The drab building is the powerhouse of the Kajaki Dam Hydroelectric Power Plant, which has cost considerable blood and money, a level of sacrifice that does not compare well with the limited amount of power it yields. At least 40 U.S. and British troops have died in fighting in this area as well as hundreds of Afghan soldiers and civilians. Tens of millions of U.S. dollars have been spent already to keep the dam operational through the past decade of war on top of a new $266 million contract from the United States Agency for International Development (USAID) to increase the dam’s capacity.

One of the largest and most unwieldy development projects the U.S. government has undertaken in Afghanistan, the Kajaki Dam is part of a multi-billion dollar effort by President Obama’s administration to step up civilian aid to Afghanistan in tandem with the U.S. military’s counterinsurgency strategy. Experts on international development in Afghanistan and Washington criticize the Kajaki Dam project for its lack of oversight.

U.S. and Afghan officials openly concede that huge contracts like the one at Kajaki often end up putting money in the hands of the Taliban through Afghan subcontractors who are forced to pay protection to keep workers from being killed by insurgents. In an interview with General David Petraeus in Kabul just before he was tapped to head up the CIA, the commander said, “There’s no question that we have to make sure money is not ending up in the hands of the bad guys. We have to do better at managing these projects and we’ve put together guidelines for contracting to do that.”

In the end of the day, critics say that the Kajaki Dam embodies the futility of the U.S. effort in Afghanistan. Andrew Wilder, director of Afghanistan and Pakistan for the United States Institute for Peace with more than two decades experience in delivering aid in the region, has been sharply critical of such huge contracts with insufficient oversight: “There’s little evidence that this kind of aid is providing stability. In fact it actually can have a destabilizing impact.”

Afghan and USAID officials involved in the project counter critics, saying the dam does indeed pose extraordinary challenges, but it also provides an extraordinary opportunity to deliver much-needed power to the region.

Few have a better sense of the long view of history on this dam than Sayed Rasoul, a well-spoken engineer from Kabul, who manages the power plant and has worked there for 34 years. Through an extraordinary engineering career that spans the Soviet occupation, the civil war, the Taliban control and now the U.S. presence, Rasoul says his job has always been as much about running the plant as about simultaneously appeasing the military forces that throughout history fight for control of this land.

Right now, Rasoul explained, there are two opposing Afghan governments that both operate in this area. One is the Afghan government under President Hamid Karzai that issues orders from Kabul and the other is a shadow government of the Taliban which seems to have a more firm grip on the daily operations of this region.

Both of these rival governments want more electricity from the dam and the ability to collect the revenue and political loyalty that would come from the surrounding populace in exchange for it. But neither the central government nor the local Taliban rulers seem to understand that the country’s aging transmission grid can carry only a finite amount, according to Rasoul.

Kajaki’s powerhouse, built by American engineers in 1975, contains two hydroelectric turbines and has room for a third, which would significantly increase the capacity of energy the dam can provide. In 2008, British forces mounted a huge operation to bring components of a third turbine in by force. Three years later, the pieces of the turbine sit exposed to the elements in an empty lot near the dam.

To install the additional turbine, an estimated 700 tons of cement, rock and gravel will be required — the rock and gravel can be crushed locally but the cement and heavy equipment must come from Kandahar, about 250 kilometers down an extremely dangerous road that borders nearly indefensible terrain known as “The Green Zone” for its lush vegetation.

Rasoul sees no easy answer to the problem of installing the third turbine — he says negotiations with the Taliban will fail because it would involve many different shadowy commanders with competing interests. He has tried before.

It is important to recognize that while Western media sources generally refer to all anti-government forces in Afghanistan as Taliban, implying a unified Taliban command structure, the reality is that there are innumerable small groups fighting for varying reasons and accountable only to their local commander. Some are willing to cut deals with the Afghan government, and some are sworn to fight the foreign forces to the death.

Rasoul, who speaks English, uses the word “Taliban” to refer to the Afghan government from 1996 to 2001, and refers to today’s insurgent fighters as “the opposition.” The plant workers, including Rasoul, live away from the dam’s military fortifications in opposition-controlled areas, and these insurgents are also their neighbors.

Even if the third turbine is installed, Rasoul points out that the massive project will amount to little in terms of providing more energy to the region unless the transmission grid is also upgraded. So even after more lives are lost in the ongoing fighting here and potentially hundreds of millions of dollars in U.S. taxpayer money is spent, Kandahar City and Lashkar Gah will not be able to receive any more electricity from Kajaki, he said.

“Caught between the millstones”

While NATO forces have shown themselves capable of temporarily securing the road to Kajaki in the past, the transmission lines are another story. According to Rasoul, 90 percent of the lines are in areas outside government control and represent a significant vulnerability if NATO tries to force the project through without Taliban consent.

USAID Director of Technical Services in Afghanistan and Pakistan, Gordon Weynand, is in charge of the logistical and technical aspects of the $266 million project to replace the third turbine, has never actually been to the Kajaki Dam. But in an interview in Washington, D.C., Weynand agreed that the aging electrical grid does pose “a very serious challenge” to the overall impact and success of the project. He maintains that when the third turbine is in place, the Afghan government with the assistance of the U.S. will then turn its attention to improving the grid. This is a very long, term project, he says, but one that is essential for the future of Afghanistan. As he puts it, “In the end of the day, it is worthwhile. It will help us achieve our objectives.”

When opposition fighters have cut power to Kandahar and Lashkar Gah in the past, Kajaki’s workers must climb the remote towers without safety ropes, often wearing sandals, and repair the lines. Working alone and unarmed in Taliban-controlled areas, they rely on their relationships with and alleged protection payments to the fighters to survive.

Rasoul denies paying protection money to the opposition, but he was held captive for four days this summer by insurgents demanding more electricity.

The catch-22 is that the fighters working between Kandahar and Kajaki are too fragmented to negotiate with effectively for the construction project’s safety, Afghan and U.S. military officials in the region say. But if the material is forced through by the Marines, as it likely will be in the coming months, the insurgents in the area are expected to strike at the project’s least defensible point — the Afghan workers.

“We are caught between the millstones,” Rasoul said ruefully.

Rasoul insists that the Kajaki Dam, despite its problems, remains southern Afghanistan’s best hope for inexpensive, long-term electricity production. Although NATO-run diesel generators produce huge quantities of electricity at Kandahar Airfield and Helmand’s Bastion Airfield, Rasoul contends they will be too expensive for the Afghan government to maintain on their own.

About a quarter mile from the dam, a U.S. Marine artillery battery occupies Forward Operating Base Zeebrugge, a collection of low mud-brick buildings that once housed dam workers, and then Soviet troops, near the turquoise waters of Kajaki Lake. One of the outlying buildings bears scars from a battle that was allegedly the scene of a Russian platoon’s desperate last stand against mujahideen in 1988.

“The Taliban want to undermine the government’s credibility by preventing the dam’s completion,” said Capt. Matthew Ritchie, commander of Echo Battery, 2/12 Field Artillery, the U.S. Marine Corps unit tasked with defending the Kajaki Dam. “The challenge is to make sure the [Afghan Police] are capable of communicating their own credibility after we’re gone.”

“If and when the dam becomes fully operational, that equals greater credibility for the Afghan government,” Ritchie said. “In the grand scheme of things it’ll show people that they have a legitimate government that cares about them.”

Ritchie’s Marines are what is known as provisional infantry. They are trained for something else, in this case firing huge howitzers at distant targets, but they are required by a military stretched thin to patrol and fight on foot as infantrymen.

“Thankfully we received this mission a year in advance so we had some time to train for this new role,” Ritchie said. “It’s been challenging, but our Marines are adapting well.”

There will almost certainly be an attempt by the Marines to force the cement and equipment from Kandahar to Kajaki through a supply line that will require convoys of hundreds of trucks. Ritchie said he is preparing for that possibility by clearing whatever IEDs the Marines can from nearby fields, and making “foundational relationships” with both local farmers and the district governor, Salim Rodi Khan.

Khan’s compound is 500 feet from the Marines’ base, between them and the dam. The governor’s staff tends corn, cucumbers, grapes and many sweet-smelling flowers within the compound walls.

Khan has been Kajaki’s governor for eight months, after his predecessor left for a job with the national government. He has the air of a man living under siege, grim and taciturn, but with a well-developed sense of gallows humor.

“Kajaki is like a beautiful girl, and America wants to spend a lot of money on her and take care of her,” Khan said during a moonlight Ramadan feast at his compound. “The Afghan (national) government wants to cover her up and doesn’t take care of her.”

Speaking through an interpreter, Khan expressed anger with the Afghan government for their lack of support for Kajaki District, and said the only help he gets is from the U.S. and NATO.

“Maybe in the future, Kajaki will be the best district in Afghanistan, with sightseeing, culture and peace,” Khan said. “But before that we must have schools and hospitals that will endure as long as the dam. All education here stopped 30 years ago.”