Afghanistan: Petraeus “should be ashamed of himself” 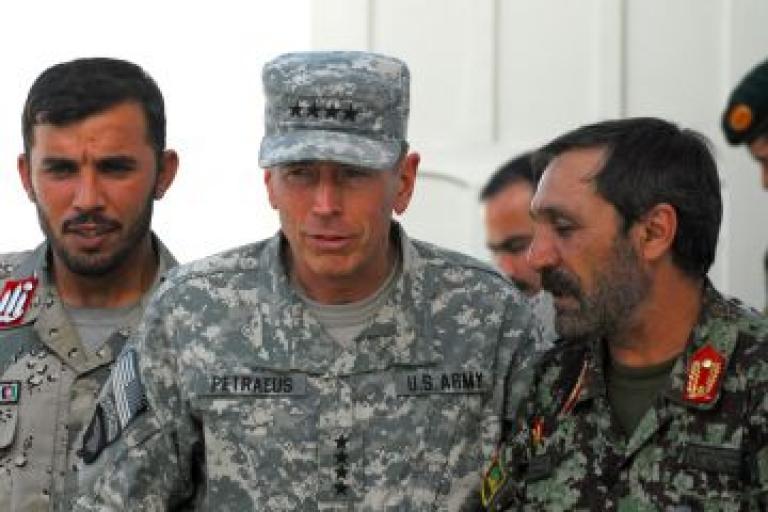 KABUL, Afghanistan — As the U.S. President Barack Obama and his wife, Michelle, make their way east, having cemented the “essential relationship” between Whitehall and the White House during their glamorous visit to London, a former diplomat is doing his best to expose the fissures between the two countries’ policies in Afghanistan.

Sir Sherard Cowper-Coles, the U.K.’s ambassador to Kabul from 2007 to 2009, with another year tacked on as Special Representative of Her Majesty’s Government to Afghanistan and Pakistan, is nothing if not blunt. In a new book, “Cables from Kabul,” he tells the tale of his long tenure as the Cassandra of the foreign policy establishment.

In a recent interview with the British newspaper, the Guardian, the erstwhile envoy gave free rein to his frustration with U.S. policy in Afghanistan, especially with the stepped-up military offensives of the commander of U.S. and NATO forces in Afghanistan, General David Petraeus. At one point in the interview, Cowper-Coles says Petraeus “should be ashamed of himself.”

In his year as the Afghanistan military chief, Petraeus has more than doubled airstrikes, and has radically increased Special Forces “kill or capture” raids, in a bid to convince the Taliban insurgency that it cannot possibly win.

But the outspoken diplomat is not impressed.

“No doubt Petraeus has hammered the Taliban extremely hard,” Cowper-Coles told the Guardian. “I am sure that some of them are more willing to parlay. But, equally, for every dead Pashtun warrior there will be 10 pledged to revenge. I’m afraid I don’t think the present increase in violence is right or proper and its nightly slaughter of the Taliban without a political strategy in place is tactics, not strategy. It is profoundly wrong and it is not conducive to a stable political settlement.”

But to give the man credit, he was remarkably candid during his tenure in Kabul.

He caused a major diplomatic contretemps when, in an overly frank discussion with a French diplomat in 2008, he said that NATO policy in Afghanistan was doomed.

The diplomat wrote up the conversation in a coded cable to Paris; the message was leaked to a French newspaper, Le Canard Enchainee, and the cat, or, in this case, the duck, was out of the bag.

A somewhat red-faced British Foreign Office said that Sir Sherard’s words had been “distorted,” but did not deny the overall tenor of the ambassador’s remarks.

It was also no secret to anyone in Kabul’s press corps that Sir Sherard was no fan of Afghan President Hamid Karzai. Insider scuttlebutt put him at the forefront of the “dump Karzai” movement in early 2009.

The initiative failed to get off the ground when the U.S. Special Envoy Richard Holbrooke decided that there was no real alternative to Karzai, who duly won a second term in a highly suspect election that September.

The British ambassador was also a major proponent of negotiations with the Taliban, a position that was anathema to the U.S. government of George W. Bush.

Even the advent of Obama did not remedy the situation immediately; the new president was caught up in internal policy debates for his first several months in office. According to “Obama’s Wars,” Bob Woodward’s account of the debut of the new administration, the inexperienced head of state was steamrollered by the military into the very strategy that has Cowper-Coles so riled up at present.

Cowper-Coles was overruled at every turn; his concerns were brushed aside in the interests of maintaining the “special relationship” that Britain enjoyed with the United States.

He sounds a bit bitter about his government’s junior role in the war, complaining of the “illusion … that Britain could somehow have an independent strategy towards Afghanistan.”

Cowper-Coles stepped down in 2010, and has since taken a top position with Britain’s leading arms manufacturer, BAE Systems.

His new job is likely to damage his credibility a bit, especially since he reportedly spiked an investigation into corruption at BAE when he was ambassador to Saudi Arabia.

But it would be a shame to dismiss the observations of such a dedicated and acute observer, especially when his comments are taking on a prophetic hue.

The United States’ own ambassador to Kabul, retired Lt. Gen. Karl Eikenberry, contributed a few leaked cables of his own to the history of the conflict in Afghanistan. In January 2010, two memos addressed to the secretary of state were printed in the New York Times, highlighting many of the points Cowper-Coles has made before and since.

Eikenberry advocated against Obama’s proposed troop surge, saying it was unlikely to do any good and could quite possible contribute to a further weakening of the Afghan state.

He stated openly that Karzai was not “an adequate strategic partner,” that he could not shoulder the burdens of sovereignty and was willing to turn a blind eye to corruption. No counterinsurgency strategy could succeed with such a leader at the head of the Afghan government, Eikenberry emphasized.

But Eikenberry’s was also a voice in the wilderness, and did not significantly affect U.S. policy, which, as Cowper-Coles points out, is even now being driven by the military, not the State Department.

A decade into the war, the United States is at last coming around to some of the positions the British ambassador was advocating four years ago. Negotiations with the Taliban are at last on the table, if not yet producing any real results. It is now commonly accepted that there will be no military solution to the war, although, as Sir Sherard points out, it is still offensive operations and body counts that dominate the reporting on Afghanistan.

One can hope that some of Cowper-Coles’ gloomier predictions do not come true: at one point he estimated that Afghanistan would be dependent on foreign assistance for the next 50 years. He has also forecast “civil war and chaos” if international troops were withdrawn “precipitately.”

As the endgame rapidly approaches in Afghanistan, it will soon become clear who was right: the cheerleading generals or the downbeat diplomats. At this point, it could go either way.