Across the country, Muslims are fighting voter suppression and intimidation 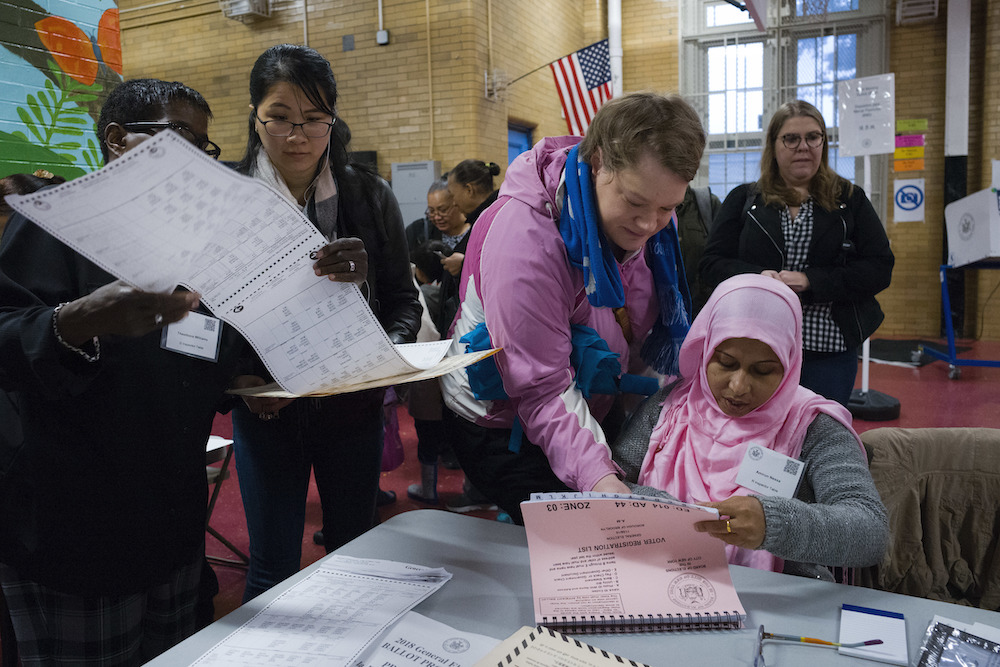 A Muslim activist in Lackawanna, New York, said she suspected her vote had not been counted after she dropped off her absentee ballot in the town’s June primary elections. An attorney then asked the local board of elections to see the names of voters whose ballots had objections.

Of about 200 ballots with objections filed against them, all but one had names that sounded Muslim or Middle Eastern. The ballots were all related to contests with Arab American candidates.

And less than an hour after a Freedom of Information request was filed with the Erie County Board of Elections, all objections to those ballots were withdrawn by the local politician who had filed them.

“Disenfranchising voters by discretely rejecting absentee ballots is abhorrent and a threat to democracy,” said organizer Amira Muflahi of Voters Organized to Inspire Civic Action (VOICE) in a statement. She and other members of Lackawanna’s growing Arab and Muslim community had been getting increasingly involved in get-out-the-vote initiatives, with several running for office this year. “We try to preserve and safeguard the unalienable rights of our citizens by assisting them at the polls, but how can we protect their right when ballots are being thrown out behind the scenes with no regard?”

Activists groups, including the Council on American-Islamic Relations (CAIR), have asked the New York State attorney general to open a probe into potential voter suppression in the small upstate New York town. The attorney general’s office told the Middle East Eye that they would look into the incident. But New York Muslims are not filled with confidence about the integrity of November’s elections.

“To disqualify the votes of hundreds of eligible citizens is the worst danger to our democracy that can be imagined,” said attorney Afaf Nasher, executive director of CAIR’s New York branch in a statement referencing the Lackawanna ballot allegations. “Regardless of religion or race, every eligible vote is crucial to preserving the legitimacy of our government. Disenfranchising certain populations is an abhorrent practice victimizing marginalized communities to censor their voice and stunt their political power—but we will not be silenced.”

More than three quarters of all American Muslims are registered to vote in the November elections, according to this year’s American Muslim Poll conducted by the Institute for Social Policy and Understanding. While that rate still lags behind those of other major faith groups in this country, Muslim voters’ populations in several critical battleground states, including Michigan and Pennsylvania, mean their votes could help sway the election.

But across the nation, community leaders say Muslims are facing barriers to the ballot box. For many immigrant communities, translation and language access remain perennial issues. Black and low-income Muslims are disproportionately impacted by voter ID and criminal disenfranchisement laws.

“A lot of people in our communities don’t have the language to defend their right to vote when they’re being discouraged at the polls,” said Doha Medani, operations lead for North Carolina’s Muslim Women For, a grassroots social justice organization. The group is leading phone banking and texting operations aimed at local Muslims, translating voting material into languages commonly spoken by Muslims in the state, and holding “Prayer to the Polls” events to bus Muslim voters from mosques to polling sites.

Medani said she has seen immense confusion among local voters due to new changes in state voting rights. Courts have temporarily blocked North Carolina’s voter photo ID requirement as well as laws preventing former felons from registering if they have outstanding fines or fees.

“People still think they need to physically take an ID with them to the polls, but they only need one to register,” Medani said. “People affected by the criminal justice system, who are disproportionately Black, are scared. They’re not sure if they owe money or which laws apply to them, so some are just not going to vote because they don’t want to risk getting another charge.”

In Minnesota, the problem with election disinformation goes all the way up to President Donald Trump, who has repeatedly amplified unproven allegations of a voter fraud scheme involving Rep. Ilhan Omar and members of the state’s large Somali Muslim population. “This is totally illegal,” Trump tweeted. “Hope that the U.S. Attorney in Minnesota has this, and other of her many misdeeds, under serious review??? If not, why not???”

Late last month, political provocateur James O’Keefe’s right-wing undercover activist group Project Veritas published a since-debunked 16-minute video claiming to prove that Rep. Omar and her campaign in Minnesota “may be behind one of the biggest voter fraud schemes in American history.”

In one Project Veritas clip that appears to be taken from Snapchat, a man named Liban Mohamed discusses how funds are critical to winning a campaign; in another clip, he boasts about picking up 300 mail-in ballots in a single day for his brother’s race for city council. A Somali “insider” claimed in the video, without offering proof, that Omar paid for the harvesting of those and other ballots.

Mohamed is not an Omar campaign employee, he was not picking up ballots for Omar, and there is no evidence he paid for the ballots. The Election Integrity Partnership (EIP) has described the video as “a domestic, coordinated elite disinformation campaign” using misleading or false information to question the integrity of the election. The campaign’s timing, EIP researchers from Stanford and the University of Washington noted, suggested the possibility of coordination between Project Veritas and Trump campaign officials attempting to drown out new media coverage of Trump’s tax returns.

While Trump and other critics have attacked “ballot harvesting” as equivalent with fraud, dozens of states, including Minnesota, allow volunteers and campaign workers to collect and deliver some sealed ballots to election officials on behalf of voters who cannot deliver them, such as seniors and disabled citizens.

Local leaders say the fraud allegations are an attack against the integrity of their votes and an attempt to stifle the consistently high voter turnout among Minneapolis’ Somali and Muslim population. Nearly half of registered voters in Ward 6—which includes the East African immigrant-dominated neighborhood of Cedar Riverside, which the Project Veritas video targeted—cast their ballot during August’s primaries. Across the state, that number was 22 percent.

“Seeing the number of Muslims engaging in their voting rights, these people are trying to discredit us and give our people fear,” said Hodo Dahir, who works with CAIR-Minnesota. She has called on Minnesota Attorney General Keith Ellison, who was the first Muslim to serve in Congress, to investigate the claims. “We’re fighting for our right to vote every single day,” Dahir said. “In November, I don’t think [anything] is going to stop us from turning out.”

Ellison had already begun an investigation into Atlas Aegis, a private security company that had told The Washington Post that it planned to guard Minnesota polling sites with a “large contingent” of armed veterans. On October 23, Ellison announced that his office had obtained “a written assurance” that the company would not recruit or provide security for Minnesota polling sites.

In previous years, Muslim voters have seen instances of voter intimidation at the polls.

During the 2016 elections, activists in New York and Michigan reported voter intimidation against Muslim women who wore the hijab and niqab. At polling sites in Canton, Michigan, several Muslim women were allegedly asked to remove their niqabs and fully reveal their face to verify their voter identification.

A 2016 exit poll across 14 states by the Asian American Legal Defense and Education Fund (AALDEF) found that 46 percent of Muslim voter respondents were asked for identification versus 32 percent among non-Muslim voters. In New York, most voters do not need to provide ID. But at a poll site in Midwood, a South Asian neighborhood in Brooklyn, one AALDEF monitor reported hearing announcements that voters “need ID” whenever voters in traditional Muslim clothing were standing in line.

While Michigan voters are asked to produce appropriate photo ID, those who do not have one can also sign an affidavit and vote using a provisional ballot. According to reports received by AALDEF, several Arab American voters dressed in “traditional clothing” were incorrectly told they were not registered to vote. One Bengali-speaking woman voting in the Muslim-majority city of Hamtramck was allegedly asked to prove her citizenship to receive a provisional ballot.

A 2014 analysis from the left-leaning Center for American Progress found that use of provisional ballots is more likely in counties with higher percentages of minority voters. But well over a quarter of provisional ballots are either not fully counted or entirely rejected, due to issues such as being registered in another jurisdiction or the signature on the ballot application not matching that of the registration record.

“My mom, who has been a U.S. citizen since 2000, if she was handed a provisional ballot by a poll worker, she wouldn’t question it,” said Umer Rupani, executive director of the Georgia Muslim Voter Project. Experts say usage of provisional ballots has been particularly high in the state.

“She would think that a government employee just handed me a document, and I’m supposed to trust the government, so I’m going to fill this out,” Rupani said. “But she doesn’t know that her vote was just suppressed, and that it was probably done with a smile on their face.”

In 2018, the Georgia Muslim Voter Project was part of a successful lawsuit against the state in response to the high number of absentee ballots being disregarded due to “mismatched” voter signatures. That year, in a single Georgia county, nearly 600 mail-in ballots were rejected due to a signature-matching issue. During that same election, minority voters were significantly more likely than white voters to have their mail-in ballots rejected for mismatched signatures or for being incorrectly completed, per one study of Georgia’s voter files. Since then, a U.S. District Court judge ruled that ballots could not automatically be thrown out due to signature mismatching.

Still, Rupani contends his team has seen other instances of attempted voter suppression. He said his team analyzed the hundreds of thousands names purged from the state’s voter rolls last year for being classified as “inactive.” He alleges that list contained a “much larger proportion of Muslims than there are Muslims in the state.”

The state of Georgia has also closed a number of polling places this year. Those closures, along with strict voter ID laws and registered voters being purged from the rolls, make it harder for voters to cast ballots, and could have an especially negative effect on Muslim and minority voters. But Rupani notes that few of these actions, or what he calls “voter suppression tools,” are “technically against the law.”

“It’s all done under the guise of trying to create a healthier democracy,” Rupani said, “but the more barriers to entry, the less our communities’ voices are actually counted.”

A version of this story appeared on RELIGION & POLITICS on October 27, 2020