After covering Tahrir Square, an Egyptian’s view of the RNC 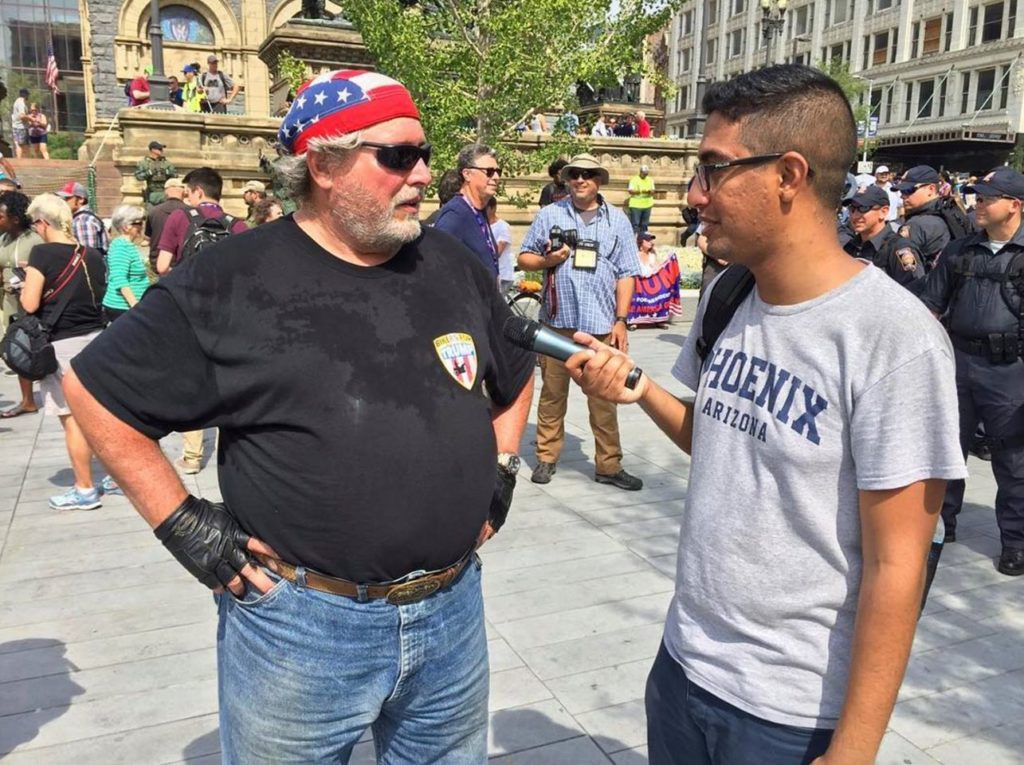 Mohamed Abdelfattah interviews Jack, a Trump supporter who rode from North Dakota to Cleveland for the RNC. (Photo by Jenny Montasir/GroundTruth)

CLEVELAND, Ohio — Jenny and I arrived in Cleveland on Wednesday with our camera and microphone, and headed downtown immediately.

I’m an Egyptian journalist, born in Alexandria, who covered the Arab Spring and then moved to Phoenix a year ago. I met Jenny, now my wife, in Egypt as she was making a documentary about the uprisings. Together we are creating a video series, “America & I,” which documents our experiences in the US during a historic and often mind-boggling election season.

Amid the commotion of demonstration around the Republican National Convention, it was hard to make sense of what we saw and heard.

As delegates inside Quicken Loans Arena partied, the atmosphere outside was bizarre but mostly subdued: concerns of violence in the lead-up to the convention apparently kept many away.

So with the exception of a few altercations, the scene outside the convention was more reminiscent of Speakers’ Corner in London than full-blown protest.

Every so often, demonstrators arrived at one of the two major gathering points, Public Square and East 4th Street, with a statement. They’d hang around for hours, taking questions from media, and leave.

Some created more tension than others, with crowds starting to congregate, and the heavy police presence would take positions and cordon off the sides, making sure nothing physical took place. Rinse, repeat.

Public Square, the epicenter of protests in downtown Cleveland during this convention, was abuzz with reporters and photographers and very few protesters.

East 4th Street is a dense line-up of bars and restaurants with an occasional scattering of demonstrators, each espousing their own sign and cause.

Compared with a Donald Trump rally we covered in our home city of Phoenix late last year, Trump supporters were more careful about presenting their positions here, guarding themselves against what they perceive as defamation and misrepresentation in the media.

Every Trump supporter I interviewed rejected the notion that their candidate would actually ban Muslims from entering the US. Although Trump said it the most literal and explicit way, his supporters discussed it with more nuanced wording.

“It’s just a temporary moratorium on certain countries that have problems,” one Trump supporter said.

That got me thinking. I witnessed firsthand how Egyptian President Abdel Fattah el-Sisi managed to sway large segments of society from ever thinking about a democratic Egypt again. He offered promises of law and order to a country in flux, while waging a campaign of violence against Islamists and other perceived enemies of the state.

Trump has not reached that level of power, and we cannot be certain what a President Trump would do. But his run for the presidency has enabled a very dangerous climate in the US as he has openly incited hatred against others based on their ethnic, national or religious backgrounds. We have heard crowds cheer for the state to impose more order, whether to “build that wall,” between the US and Mexico, or “lock her up,” referring to the presumptive Democratic presidential nominee Hillary Clinton.

But sometimes I also sense some unease in that cheering. Yet because his voters are “feeling so good” about Trump as a personality, they let go and accept his demagoguery.

The number one factor that Trump supporters talked about was the down economy, which only feeds the anger. Most expressed concern about US manufacturing towns becoming defunct. Being laid off or ending up with a terrible retirement in which their social benefits are eroded.

“I’m a laid-off oil field worker. I’m working as a truck driver in the meantime to pay my bills,” Jack, of Bikers for Trump, told me.

He said he’d ridden his motorbike 1,300 miles from North Dakota to Ohio to show support for Trump.

“I took a week off from work without pay to be here,” he said.

I was curious to finally meet a Bikers for Trump member in person. I never understood the relationship between Harley Davidsons and a presidential candidate.

“We’re middle-class Americans. We’re all hard workers. [Trump] stands up for the middle class,” he added.

As Jack justified his support for Trump through economic reasons, I couldn’t let him just steer away from Trump’s explicit fascism.

“Do you think, if Trump becomes president, I should be worried?” I asked him.

“No, not at all. You came in legally, right?” He replied with the question.

“Then welcome. You’re welcome amongst us,” he said in a reassuring tone.

But I was not reassured.

I thought about the advice of a dear friend from Lebanon whose family was caught in the civil war. He used to tell me that fascists are usually very nice, polite and personable. But I shouldn’t mistake that for what they really stand for at heart.

I personally, have seen friends or acquaintances from school in Egypt who were members of the Muslim Brotherhood turn against me and anyone who doesn’t support Islamist thought.

In a climate of fear and rage, no one is immune from that.

In the heat of the fascist moment, and as mob mentality takes hold, I fear anyone could throw stones at me because of my name or skin color.

So Jack’s welcome did not make me feel at home.

Follow GroundTruth’s “Generation TBD” reporting fellows, Mohamed Abdelfattah and Jenny Montasir, as they report from the Democratic National Convention in Philadelphia next week.