A war of images: a record of America’s dissonance in Afghanistan 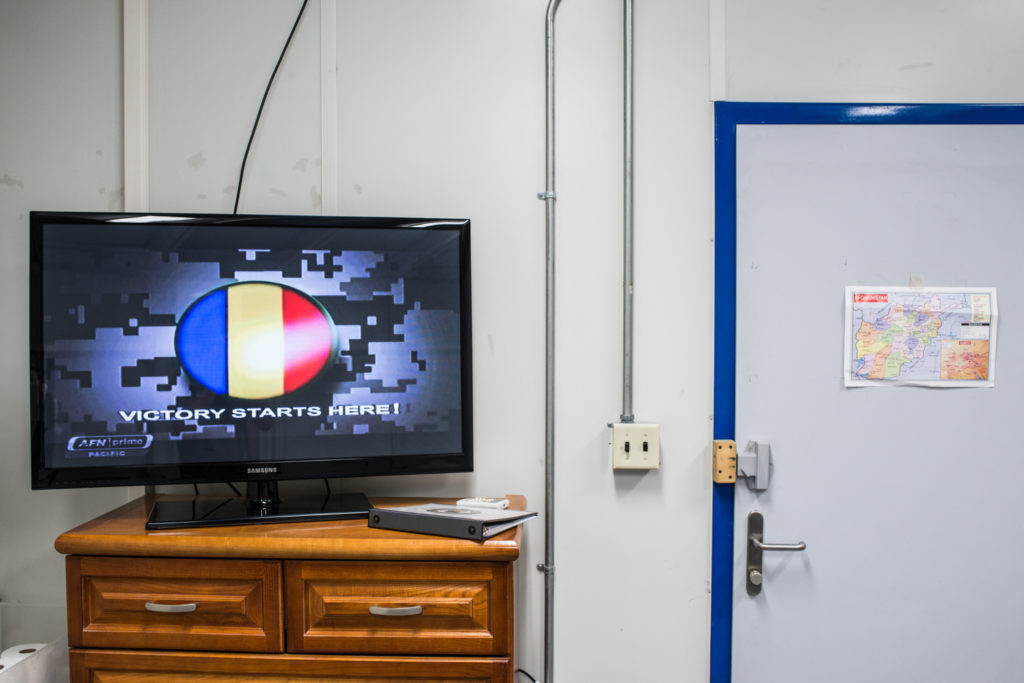 During an embed at Kandahar Airfield in 2014, reporters were housed in a guarded VIP compound and were not allowed to go anywhere without a military escort. In earlier years, reporters were given the run of the base. (Photo by Ben Brody/GroundTruth)

For most Americans, an understanding of the war’s end in Afghanistan came through the pictures they saw.

After the C-17 video, with its unmistakable parallels to the images of the last helicopters leaving Saigon at the bitter end of the war in Vietnam, information – and particularly images – became weaponized for effects on the battlefield of Hamid Karzai International Airport. Rumors flew about Taliban cutting off phone service and planes taking anyone to America who wanted to go. Military public affairs troops captured heartwarming stills to offset imagery of increasing pandemonium at the airport gates. The Taliban temporarily suspended their attacks on journalists so they could be photographed with symbols of their conquest. Both sides in this – America and the Taliban – were fighting a propaganda war to control the images, and to therefore control the narrative.

The lightning speed at which the Afghan government and military were overthrown by the Taliban surprised me, but the confirmation that America’s longest war utterly failed to meet its political aims didn’t shock me at all. After executing America’s surge-and-retreat counterinsurgency strategy through two tours in Iraq in an U.S. Army public affairs unit tasked with combat photography, I had no illusion that it would yield any more success in Afghanistan, where I worked as a civilian photojournalist for six years after leaving the military.

With the benefit of hindsight, the body of work I produced in Afghanistan is largely about the disconnect between America’s fantasy of its own might, and what the Afghan war was actually like. Discordant and hopeful messaging was written on every aspect of the U.S. war machine, from the motivational posters to the high-tech weaponry that now equips the Taliban. I was not the only one taking this skeptical approach – I highly recommend looking at the work of Peter van Agtmael, Debi Cornwall, Khalid Hadi, Victor Blue and others.

But of course these pictures pale in comparison to the pictures made by people who weren’t professionals. More often than not, the images that remain in the retina of the public and define key moments in the conflict are taken spontaneously. The iconic images of the Iraq War were taken by soldiers at Abu Ghraib prison as they boasted of torturing detainees. And despite the US military’s best efforts to prevent professionals from taking the “Fall of Saigon” picture in Kabul, it was in the end captured in an amateur cellphone video of people clinging to a departing U.S. Air Force C-17. This type of photography, made by non-professionals, is known as vernacular photography, or perhaps more commonly just referred to as a ‘snapshot.’ On social media, in memes, and through their own cellphone cameras, people look at a lot more snapshots than they do professionally made pictures – perhaps it is the more trustworthy visual language for most people.

Fittingly, the last picture the military released in Afghanistan seemed to be a conscious embrace of the vernacular aesthetic. Whether it was highly choreographed by the brightest minds in Army public affairs, or just a snapshot that happened to powerfully represent the 20-year war’s ending, we may never know. The glowing green image of Maj. Gen. Christopher Donahue, a highly accomplished soldier who has led the nation’s most elite forces, looking beleaguered as he steps onto a military jet, is at once honest and misleading. In the image, the war is reduced to one American man who is going home with all his limbs. This is obviously not everyone’s reality.

At the time the C-17 video was shot, I was frantically engaged with helping to get some of my Afghan colleagues on these flights, no matter where the planes were headed. Some of these efforts succeeded, and some have not yet. But the efforts to keep our colleagues safe and supported will continue, whether or not they decide to continue reporting in Afghanistan.

The Taliban seized Kabul and have begun cracking down on its previously flourishing media industry. At GroundTruth we have had a long connection with Farshad Usyan, a photographer from Mazar-i-Sharif who was fortunate enough to catch a plane to France last month. Looking through his lyrical images from Afghanistan’s beautiful north is a sad reminder of what has been lost, and hopefully will be reclaimed.