A struggle for democracy: Scenes from Myanmar’s protests 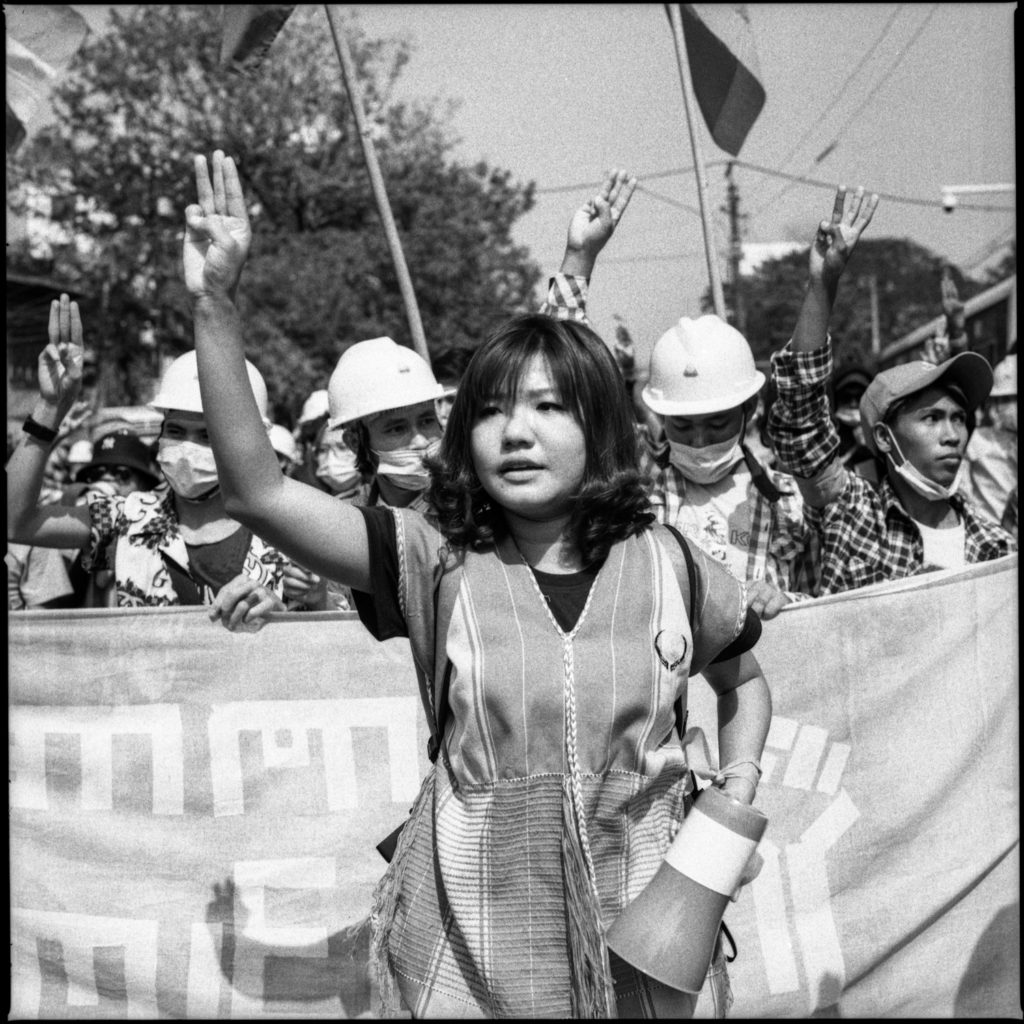 Ei Thinzar Maung, a political activist, is seen protesting along with labour union in Yangon on February 6, 2021.

A young woman with a megaphone bravely holds up a three-finger salute, the symbol of resistance in Myanmar, in front of a line of protesters on the streets of Yangon.

A mother cradles the framed portrait of her 24-year-old son who was killed by police in the brutal military crackdown and street violence that has now claimed the lives of nearly 250 people.

A woman wrapped in a white scarf kneels at the edge of a row of barbed wire which is all that separates her from a passing column of the military’s tanks.

These are a few of the powerful images captured by photojournalist Ta Mwe, an pseudonym used to protect his safety,  revealing in stark detail the intensity of Myanmar’s regression from democracy, which has turned bloody.

The military, which seized power in a coup on February 1, increased its crackdown on peaceful protesters this week and as of Friday at least 235 people had been killed and more than 2,300 had been arrested, including 37 journalists, according to the Assistance Association for Political Prisoners, an organization monitoring the crisis. The organization also warned that the death toll could be higher.

After arresting the country’s civilian leader Aung San Suu Kyi, the military junta shut down mobile internet data last weekend and declared martial law in several regions, an attempt to stop protesters from gathering and sharing information with the outside world. In a country with a long history of jailing journalists for doing their job, the junta’s push has taken the attacks on the press to a new level: the military has raided several independent news organizations, revoked their licenses and arrested journalists on bogus charges, including correspondents for BBC and Associated Press.

At the same time, soldiers are responding with increased violence, evicting entire neighborhoods by force and targeting civilians, including those not participating in the protests, according to the Office for the United Nations High Commissioner for Human Rights. The coup also exacerbated the country’s economic woes caused by the COVID-19 pandemic, with food and fuel prices skyrocketing and entire sectors paralyzed.

Despite these risks, thousands have taken to the streets to protest peacefully and defend the small democratic gains the country had achieved in the past few years. This photo essay captures their courage and defiance in the face of mortal danger.

Ta Mwe has been photographing the crisis from the beginning. Using a 1990s-era Hasselblad, Ta Mwe feels that the analog film camera allows him to concentrate more on the photography, rather than the battery life and delicate auto-focus mechanisms of digital cameras, especially when facing riot police with water cannons. “The water cannons can only damage the film roll, not the camera,” said Ta Mwe.

“I would like to show the world how the military is slaughtering its own people for power,” Ta Mwe said. “It’s been 46 days already since they seized power and over 236 people died for protesting. It’s on average five people being killed everyday here.”