ON THE GROUND IN SAN JOSE, CA

A strained but unbroken Bay Area 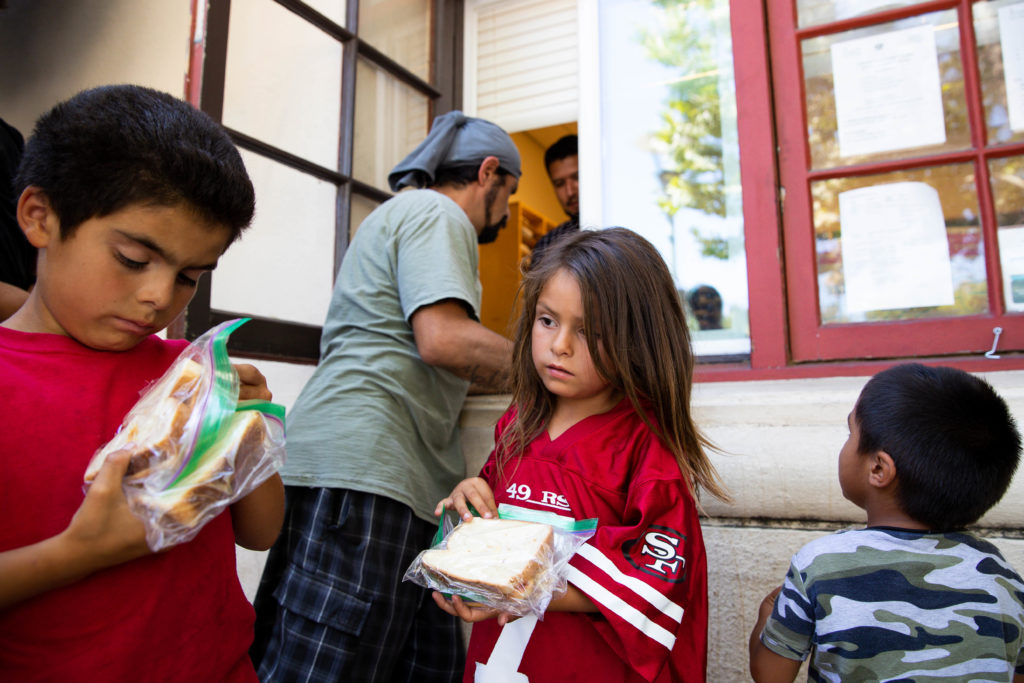 Maurice Castro (center) signs up to receive his mail as his kids Federico Martinez, 8 (left), Malissa Castro, 5 (center) and Orlando Castro, 3 (right), prepare to eat their sandwiches at the window outside of Catholic Charities John XIII Multi-Service Center in San Jose, Calif., on Monday, July 22, 2019. Many homeless use the service to receive mail and have free mail service. Some with kids use the address to be able to enroll their children in school. (Photo by Randy Vazquez/Bay Area News Group)

SAN JOSE, Calif. — The first thing locals mention are the homeless who line the streets of densely populated city blocks. They sleep restlessly in RVs; in vast encampments under the freeway; in tents in front of artisan coffee shops; on scraps of cardboard and discarded mattresses; on subway car seats that lurch from one end of town to another.

This is the Bay Area in 2020, infamous for its homelessness crisis and rising inequality, where the gulf between the rich and the poor can be seen every day on the street. Tents are propped up in front of swanky restaurants and boutique gyms; the impoverished pick through techies’ trash; misery laps up against luxury, all while the elements rage — fires, earthquakes, drought.

I finally returned to this place, where I was born and bred, as a journalist last June, after spending years away reporting in North Carolina, Washington D.C., Honduras, Mexico, Colombia and Argentina.

Yet my homecoming was fraught. Just a few months before I moved back, I lost my best friend to a traumatic and unexpected death. When I got there, I was overwhelmed by my grief and terrified of what I would find in a place built on 28 years of our shared history, from our local Thai haunts to Berkeley’s Tilden Park and the campgrounds of Big Sur.

But quickly the Bay Area itself demanded my attention. Spread across nine Pacific coast counties, it commands an immense physical space and, as home to Silicon Valley, it has a particular weight in the popular imagination. It still looked the same to me as when I left in 2006, with its glorious ocean vistas, winding hills and abundant gardens, but it was profoundly different. Skyrocketing rents, homelessness, rising inequality, a migrating creative class — these are the concerns foremost on many local minds. Local and national outlets debate whether San Francisco could be fixed at all — or claimed the city was irrevocably broken.

My job brings me into close contact with all of these problems, reacquainting me with my hometown through the occasional fog of grief. As I reported in my early months on the beat, the gap between the haves and have-nots in California is growing ever larger, with the top 5% of households in places like San Francisco County earning an average of $808,105, compared to $16,184 for the lowest 20%. More than half of Latinos, who make up nearly 40% of the state population, struggle to make ends meet at all. Meanwhile, homelessness is on the rise. From 2017 to 2019, it increased by 47% in Oakland, California, while, in Sunnyvale, it surged by 147% over the same time period. The housing crisis is creating a new breed of super-commuters, who spend hours navigating the region’s maze of highways each day.

Given such challenges, I decided to focus my reporting on the creative solutions people were developing to live, survive and thrive here.

I met people like Adelle Amador, who has spent the last few years living in cars and motels with her husband and children because they can’t find stable housing. They benefited from a program I profiled that provides the simple necessity of a mailing address to homeless people in the high-tech hub of San Jose, so they can receive updates on housing, jobs and other programs. After the story ran on the front page of the Mercury News, similar programs across the country sprung up to fill the same void.

In Santa Cruz County, I spoke to Ernestina Solorio, a single mother struggling to make ends meet on her farmworker salary. She stopped by an underground food bank for farm workers living in poverty who were too scared to go to public food banks for fear of immigration raids. I met her in an alleyway and spent the day talking to farmworkers who couldn’t afford to eat the food they harvest. One farmworker who volunteers with the food bank told me she has trouble surviving on her salary, stretching her paychecks between rent, her children, food, and her mother back in Mexico. She knows what it’s like to earn so little, so she helps others.

Farther down the coast, in Half Moon Bay, I covered the city as it rallied behind nearly 200 farm workers who were losing their jobs at a century-old Japanese American flower company, owned by the Higaki family. In the face of an increasingly global, competitive flower market and changing regional economy, people who had been at the company for decades were helping their colleagues find hope and new jobs. They have to move forward, one worker told me.

Sometimes, I imagine sharing these conversations with my friend, adding what I suspect would be her witty, idiosyncratic insight into the question of the Bay Area’s fate. I imagine she would have been moved by the stories in the pages of our newspaper.

Many of these conversations have eased my mourning, reminding me that the Bay Area is more than a place of grief and abandoned memories. It’s a place straddling the edge of a precipice–breaking, rebuilding and surviving.

Erica Hellerstein is a Report for America corps member, covering the Bay Area for The Mercury News. This dispatch is part of a series called “On the Ground,” supported by The GroundTruth Project. Follow her on Twitter: @E_Hellerstein.

A version of this story appeared on USA TODAY on January 23, 2020