A Startup for Geeks in Gaza 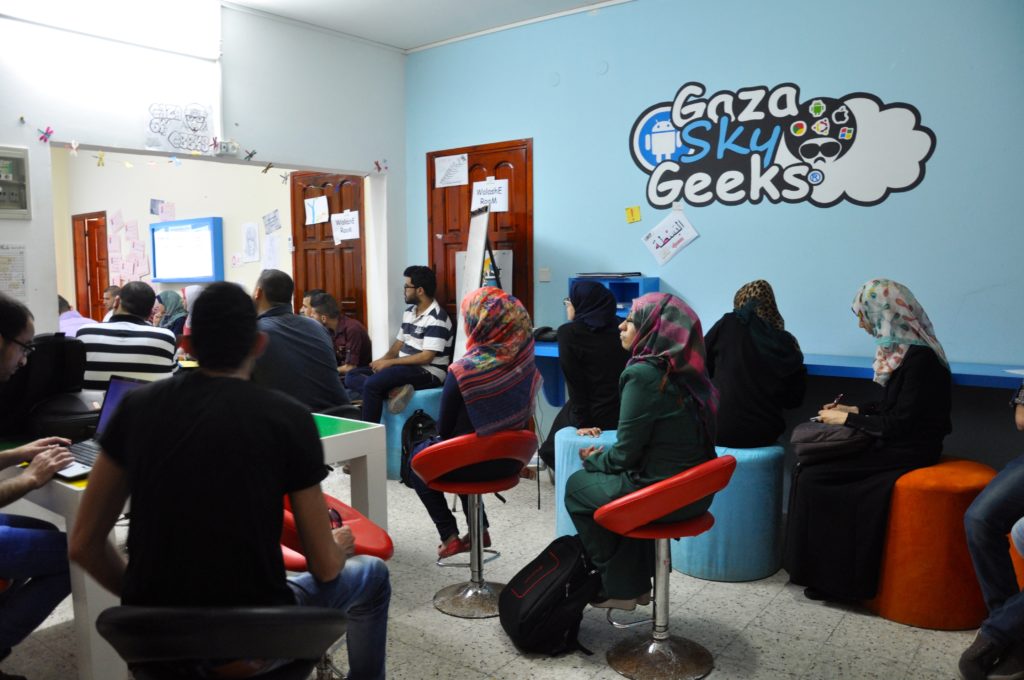 This article was published in partnership with The New York Times. Read Vox’s write-up of Lauren’s reportage here.

Tucked away in a building near the Gaza Strip’s scarred but glistening Mediterranean coastline is a wall of dreams. On it, dozens of young entrepreneurs have posted their answers to an especially difficult question: “What would you do if you weren’t afraid?”

“Usually when you have big dreams or think outside the box in Gaza, people think you’re crazy,” says Said Hassan, the manager of Gaza Sky Geeks, the territory’s first startup accelerator backed by Google and administered by Mercy Corps, an Oregon-based aid agency. “We’re trying to tell people not to listen . . . to keep reaching, to build something.”

But building is hard in a place where most youth, who’ve lived through three wars in the past six years, have never ventured outside a Philadelphia-sized territory and only know a world beyond their borders through television shows that take hours to download on slow Internet connections. According to the World Bank, unemployment in Gaza is at 43 percent, the highest in the world. Youth unemployment is more than 60 percent. Few ever obtain the necessary permits to travel through the territory’s tightly controlled borders and almost 80 percent of the population depends on aid. Following last summer’s 50-day war, in which 2,000 Palestinians and 70 Israelis were killed, rubble still fills the streets and infrastructure is in shambles. Critics of the stalled reconstruction efforts complain that not a single home has been rebuilt. Power cuts often last 16 hours a day.

Despite – and perhaps because of – the challenges, Gaza Sky Geeks has sparked an unlikely startup movement of sorts. They have hosted over 100 competitions and trainings that have reached more than 1,500 youth, the people who stand to lose the most from a protracted siege.

“Some of the greatest things are forged in a fire,” says Lauren Peate, a startup advisor who traveled to Gaza in June to speak at a five-day pre-investment “bootcamp.” Twenty-two teams, chosen from hundreds who applied, were trained on marketing basics and how to sell their big ideas to investors. Most will be making their big pitch through a Skype call. Those who receive investment will go through Gaza Sky Geeks’ four- to five-month acceleration program later this year.

In last year’s first cycle, four startups – ranging from a carpooling and taxi request service to a social network for Arab soccer fans – received outside investment from Arab-focused startup investment funds. The group hopes to secure funding for another four startups this year.

But Gaza Sky Geeks isn’t immune to its own startup woes. Last summer’s war raised the specter of even more setbacks, with many entrepreneurs deeply affected by the fighting. Hassan’s home was destroyed. Some entrepreneurs lost loved ones. But during periods of ceasefire, Hassan says he and others still gathered at the space, determined to move forward.

Last December, the group averted a threat of closing by launching an Indiegogo crowdfunding campaign. They raised more than $267,000, through the site and other donations, to cover their basic costs like Internet, salaries and rent.

“This is a place of hope,” said Hassan, standing in front of a small bookshelf with what he says are Gaza’s only copies of books like PayPal co-founder Peter Thiel’s “Zero to One: Notes on Startups, or How to Build the Future.” A drawing of San Francisco’s Golden Gate Bridge is on a nearby pinboard, as is an apropos fictional exchange between a C.F.O. and C.E.O. in which the former asks: “What happens if we invest in developing our people and they leave?” The C.E.O. simply responds: “What happens if we don’t and they stay?”

Twenty-four-year-old Omar Jouda, a charismatic computer engineer, is one of those entrepreneurs who hope to leave, though eventually come back. When he visited California three years ago for a rare month-long abroad experience, he was ecstatic to finally experience a place he had learned about through episodes of “Full House” and “Fresh Prince of Bel-Air.”

But as a Muslim, he came across a distinct challenge: finding mosques and food that is halal, or lawful, according to Islamic dietary laws.

So last year, he and five friends began developing an app called Sabeel – “the Path” in Arabic. Jouda fashions it as “The Muslim Foursquare” – a tool to help Muslims living in or visiting non-Muslim countries.

“I wasn’t even sure entrepreneurship was an option for me. Everyone goes through a period of ‘What will I do with my life?’ But in Gaza, it’s not a period . . . it’s your whole life,” he says. “There are always so many questions, like ‘If I get a scholarship, will Hamas allow me to leave? Will Israel then let me through?’ Entrepreneurship is a way for me to work through these questions.”

But staying hopeful in Gaza is like riding a roller coaster, he says. Since last summer’s war, many of his friends are now unemployed, lingering around Gaza’s few public spaces, all dressed up with nowhere to go.

“It’s depressing. Sometimes I feel bad talking about startups because everyone else is fighting depression and boredom,” he says. “Everyone is fighting the routine of day-to-day living here.”

While some Gaza Sky Geeks staff and fellow entrepreneurs say Sabeel has the best chance of “making it,” Jouda has his doubts.

“I have hope-ish,” he says, showcasing the American slang he’s picked up from binge-watching U.S. television. “But sometimes I wonder if we can really change things here . . . if we can change ourselves even.”