A reporter’s journey into a changing nation 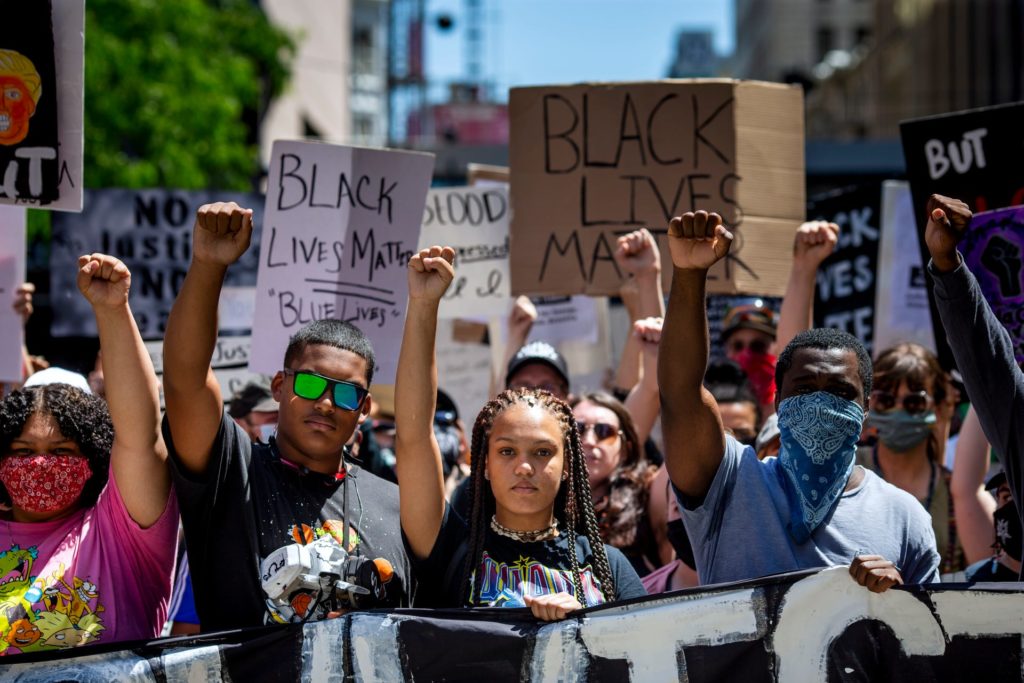 Thousands of protesters prepare to march on Vine Street in downtown Cincinnati on Sunday, June 7, 2020. Report for America corps member Julia Fair covers Northern Kentucky counties just across the river for the Cincinnati Enquirer. (Photo by Meg Vogel/ The Enquirer)

FORT THOMAS, Ky.—I’d just driven from Virginia to Kentucky during a hot, sticky weekend in May 2019. I parked my car, walked up the two flights of stairs and looked for the perfect place for my couch, which ultimately couldn’t fit through the doorway. As I unpacked, I worried it was an omen of the trouble I’d have finding my place in — the stories of — the community. I drove around, windows down, to clear my head. It was a quiet Saturday before my first day of work at the Cincinnati Enquirer, and I needed to familiarize myself with the roads and bends of a place I’d never been, that I couldn’t yet even begin to understand.

As I drove southwest from Covington, the region’s largest city, to Florence, I saw a preview of the Northern Kentuckian themes that I’d soon report on: homeless people lined up outside of a regional shelter in Covington; the Kenton County Justice Center, on a street bustling with businesses, where months later I reported on allegations about a judge accused of asking for sex and campaign contributions for preferential treatment. When I got to Florence, I drove by the region’s horse racing track, Turfway Park, where I’d soon write about the massive renovations being planned by the founders of the Kentucky Derby.

I had a basic map in my head of what Northern Kentucky looked like and I already had a few story ideas, but it didn’t take me long to realize it was the voice of the community that I lacked, and that mattered most. And though it wasn’t my job to pretend like I knew everything about the three county region and the 400,000 people who live here, it was in fact my job to gain their trust.

So I quickly made use of a Facebook page that former Northern Kentucky reporters had used for outreach.

“I’m not going to pretend like I know everything about Northern Kentucky. Because I don’t. But you do,” I told city employees, elected officials and community members alike. “We can’t have community journalism without the community so I’m going to need your help to do the best job that I can.”

The tips poured in. Some emailed me after I wrote a welcome column asking about their chili, their government and their neighborhoods. Some were prompted by a message I wrote at the bottom of each of my articles, urging community members to reach out. Others contacted me on Facebook. I worked out of coffee shops and made friendly conversation with community members. I handed out dozens of business cards.

“I heard Julia Fair wanted to know things,” one source told me over the phone.

From this outreach grew stories: The family court judge who faced removal from the bench; reports on another public official, a county prosecutor, who attempted to oust his sex offender neighbor by asking the city to build a playground. Dozens of community members helped me report on how a sewer damage reimbursement system failed hundreds of Northern Kentucky residents as their pipes overflowed and pushed feces and debris into their homes after heavy summer storms. Their damage claims went unfulfilled.

Outsider though I was, I built relationships with sources, asked the community to share their voices and then listened to them. I still hear from the community members who were impacted by those articles, and continue the work of reporting on the issues most impacting their lives. What I found weren’t only stories, but a simple human truth: People want to talk about their lives, where they’re from, and they want accountability from their public offices.

I know more community help and soaring news engagement is on the horizon as interest in local news gains momentum. More people email, call and text me than ever before. And membership in the regional news-sharing Facebook group soared as the pandemic hit and protests against police violence began to sweep the nation.

People posted about the protests. As time went on, the more local it became. Then they arrived here, masses of Americans clad with Black Lives Matter signs calling for justice for George Floyd. Breonna Taylor. Opinion was split between residents, some of whom shared news articles about the rallies being organized in the suburbs of Northern Kentucky, others disavowing them in the same worried breath that claimed local businesses would be looted. Others claimed the rallies only got violent when police tried to break up the peaceful demonstrations. In the comments section, residents urged each other to keep talking about racial inequalities, even if it made them uncomfortable.

“Northern Kentucky is not immune” to racial inequalities, said regional NAACP President Jerome Bowles in his speech to hundreds of protestors marching at the rally in Elsmere.

“I’m hoping that everybody goes out and continues to lend their voice to this,” said Chris Brown, the organizer of that rally. “We have to keep lending our voice to this, we cannot shut up, we cannot sit down, we have got to go the full gamut.”

I went to a silent vigil after an elected official gave me a head’s up that one was planned for his city’s park. Residents were gathering to honor Breonna Taylor, a 26-year-old EMT who police shot–at least eight times–and killed while executing a no-knock warrant at her home in Louisville. Misinformation about her killing proliferated, and the paper in Louisville worked to stem it.

A group near the sidewalk next to the Ohio River took a knee and everyone else followed.

They knelt for eight minutes and 46 seconds, the amount of time Minneapolis police officer Derek Chauvin knelt on George Floyd’s neck until he stopped breathing, then for a full minute after paramedics arrived, according to a reconstruction of the incident by New York Times. The vigil ended with a prayer and everyone dispersed.

As I write, protests continue, a signal that the community is fed up. I keep a pulse on the comments, recognizing similar online discord from previous work in Virginia, Wisconsin, Washington, D.C. and Ohio, but I haven’t seen it last this long before.

As one Black Lives Matter protester said in Newport, “This is the birth of a new America.”