A picture is worth a thousand words, or a surprise drum set gift in this Montana town 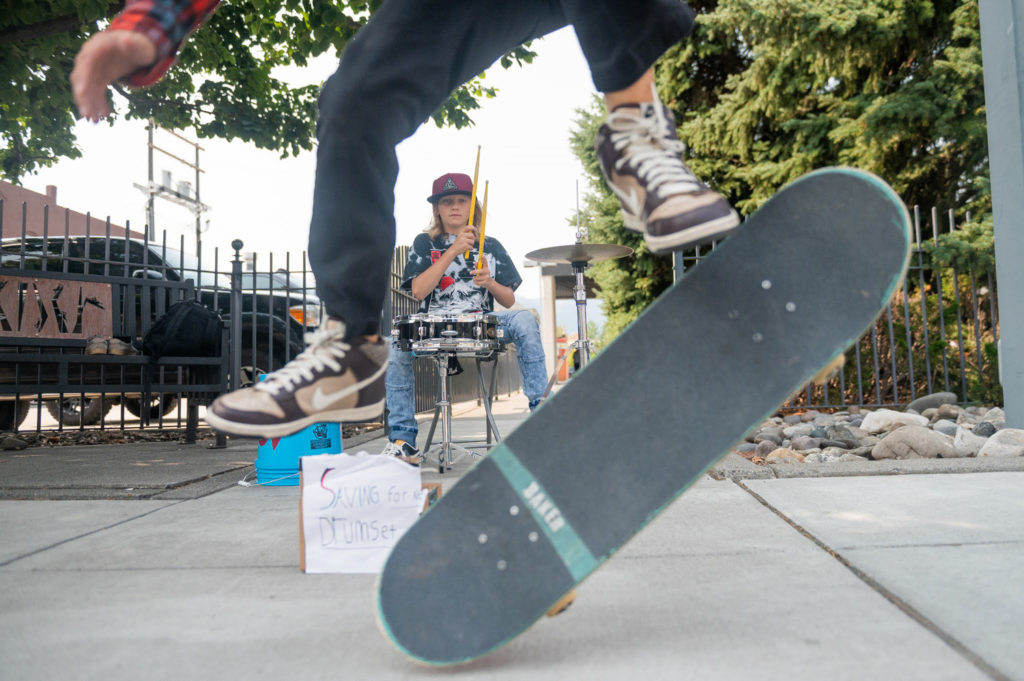 BOZEMAN, Mont. — I heard the drums before I saw them. The snare’s upbeats punctuated the summer swelter of Livingston, Montana. A hi-hat filled the spaces in between, and an upturned five-gallon bucket provided the deep thud I recognized from street drummers in cities across the country.

It was a sunny day in late August, and I was just on time for another assignment, but decided to follow my ears and find the source of the beat. I found a twelve-year-old boy, set up under a shade tree on Main St. He had long blonde hair flowing from under a flat brimmed baseball cap. A friend was practicing skateboarding tricks nearby, bored from summer break. The young drummer had a handwritten sign that read “Saving for New Drumset” propped against a box where a few dollar bills had been left by passersby. As I snapped some photos, I remembered my own twelve-year-old self, collecting scraps of metal, wood, and plastic and arranging them in some maximalist impression of a drum set.

My newspaper, the Bozeman Daily Chronicle, printed my photo of Finn Johnson busking, the soft spot in my heart thus sated. I filed it away in my mind as a successful “feature hunt,” a staple of my job as a community newspaper photographer in Bozeman, just over the pass from Livingston — an artistic railroad town where the plains of eastern Montana become the mountains of the west, and a popular stop for tourists visiting Yellowstone National Park.

The next day, Bozeman residents Mary and Clancy Gaworski were reading their copy of the Chronicle and saw the photograph of Finn. Clancy was a drummer in his youth, infamous among friends for denting their dashboards in fits of rhythm. Now 74, and unable to devote the same energy to his drum set, Clancy decided that Finn should have it.

And, so began the slow process of connecting in the age of COVID. Cindy, the couple’s daughter, tracked down Finn’s mother through mutual acquaintances.

Clancy, unfortunately, would never get to hear the boy from the newspaper play his drums. He passed away on Halloween, and giving the drumset to Finn took on an extra urgency for Mary. Now when she passed the room with the drumset, she would break down in tears. Clancy used to play drums while Mary matched his pace on the treadmill. When he picked up the tempo, Mary would protest. “What’re you doing?” she’d say, “you’re going to kill me!”

Clancy was a dedicated worker throughout his life, leaving his mark around town as a foreman for a construction company. Among his projects, the Bozeman Daily Chronicle building from where I write today. He warmed immediately to anyone working to earn their way in the world, and was equally dismissive of people he saw as trying to take the easy way out.

“He saw that picture in the paper and said, ‘You know what, if this young man is trying to earn the money to buy his own, I want him to have mine,’” Mary told me. In Finn, Clancy saw a kindred spirit.

From a young age, music has been the focus of Finn’s life. This wasn’t his first time being photographed for a newspaper, having been featured playing a hand drum at the age of four, his tongue sticking out in concentration. His mother, Lesa Maher, says he would get scolded in school for drumming with his palms and fists in class. “For the mom of a 13 year old boy,” she gushes, “it’s really nice to have something that so feeds him. It’s just so nice.”

After several false starts, Mary and Cindy were finally able to deliver Clancy’s drums on the third day of 2022. They drove over the pass in a windstorm fierce enough that the highway would temporarily close to traffic behind them. While Finn was finishing school for the day, Mary and Cindy set out the drums in his front yard and put a red bow on the kick drum.

Finn arrived at the house, face glued to the passenger seat window of his mother’s car, wondering who the heck all these people in his front yard were. Nobody told him he was getting a drum set. Important introductions made, Finn grabbed a pair of sticks and played an enthusiastic beat on the floor tom. Mary was delighted.

After visiting for a half hour, Mary and Cindy left Finn to the drums. He rushed them, piece by piece, up the narrow stairs to his bedroom, past walls covered in posters he drew of his favorite bands. I offered to help carry the heavy kick drum.

“So,” he asked, “are you the one who took the picture of me?” I told him I was. “Thanks for putting me in the news. I certainly didn’t think it would lead to this.”

Samuel Wilson, a visual journalist, is a Report for America corps member at the Bozeman Daily Chronicle.