ON THE GROUND IN NEW HAVEN, CT

A New Haven homeless shelter adapts to protect its most vulnerable 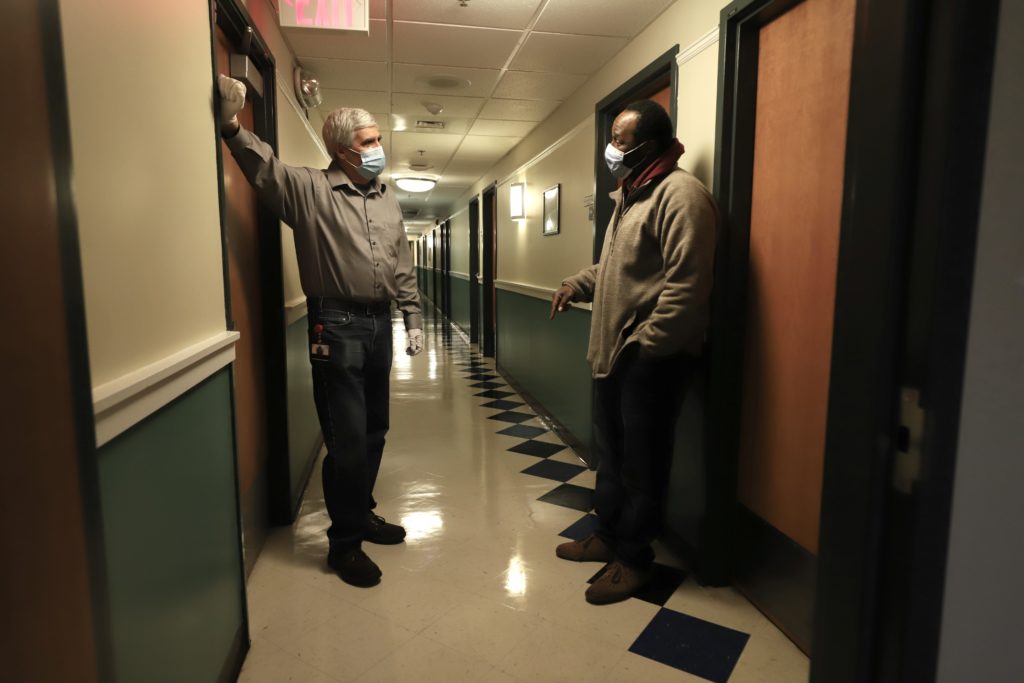 NEW HAVEN — Columbus House is typically bustling with activity, like staff doing laundry and cleaning shelter beds as volunteers rotate in and out to help prepare and plan meals for people who are homeless. When they arrived in the late afternoon looking for dinner and a place to spend the night, they’d find food and a bed there.

Now, it sits mostly empty; the lights are off and the hallways are quiet as most of the staff work remotely during this pandemic, racing to move an “unprecedented” number of people out of shelters and into alternate housing to avoid spreading the coronavirus among one of the nation’s most-at-risk populations.

“They’re more vulnerable for many reasons,” said John Brooks, the agency’s chief development officer. “For one, many of them have neglected health issues and many others have chronic health issues to begin with. And of course, the other more obvious thing is, being in a congregate site like a shelter, social distancing is next to impossible.”

Due to an executive order signed by Gov. Ned Lamont last month, homeless organizations across the state are decompressing their shelters to mitigate spread of the coronavirus in close-quarter areas.

“Given how easy this virus spreads, combined with the fact that individuals in shelters sleep in close quarters, shelters could easily have become hot spots for COVID across the state,” said Aaron Turner, director of government affairs and communications for the Department of Housing.

Turner said he believes the hoteling initiative, 75% of which could be reimbursed by the Federal Emergency Management Agency, is working, citing no rapid spread among the homeless population.

The areas of Columbus House where people normally sleep are all empty, leaving twin-sized cots separated by wooden half walls, to provide a little privacy. The cubby-like areas have a locker where once someone stored their belongings and put up pictures of family members, but now all are blank and bare.

The third floor looks more like a hospital wing, the hallways lined with doors opening to small rooms with beds for people experiencing homelessness, and veterans too, to recover after being discharged for various illnesses and medical procedures. The shelter’s Medical Respite Program helps those who are discharged without a place to go.

For those who are homeless and sick with COVID-19, the gymnasium at Hill Regional Career High School has been converted, and medical staff have filed in to treat them. A wooden barrier and door have been constructed at the entrance; a sign reads “AUTHORIZED PERSONNEL ONLY,” transforming this typical high school into a pop-up hospital, like many public arenas across the country. Rows of cots now fill the space where students usually filed in for basketball games and assemblies. In the lobby, donated pillows, clothing and cases of water are strewn across marked tables.

Back at Columbus House, Brooks said the pandemic is having significant financial impact, especially as its donor base depends on individual giving.

Since March, Brooks estimates the shelter will spend roughly $500,000 over a 16-week period, money that pays for worker salaries—incentive and overtime pay—as the staff shifts to remote work, coordinating housing and extra meals for the homeless during a crisis without an end date.

They’ve already made practical alterations to the environment and procedures, replacing water fountains with hand-washing stations and halting volunteer visits, a source of food. Though they’re struggling without adequate personal protective equipment, their Coordinated Access Network, which refers people in a housing crisis to providers with resources in the area, has reached an unprecedented level of turnaround.

Cathleen Meaden, director of housing for Columbus House, said that while nothing has changed in terms of how the network operates, it has gained a new level of intensity and importance.

“We have housed 80 people in 30 days, it has—as far as I’ve known—never been done before in any region to my knowledge,” said Meaden.

Amanda Collazo, who was homeless for four years, was staying at Columbus House as she waited in line for an apartment through rapid re-housing—a program that helps people exit homelessness quickly by providing rental assistance. But before one could be assigned, she was moved to a hotel in New Haven, where she stayed for about a week until she was placed in a two-bedroom apartment.

“I just had an awesome case worker who worked hard for her clients,” Collazo said  “I’m very, very excited about it… I’m just grateful for it.”

Cities across the state are moving people experiencing homelessness into hotels as the pandemic spreads from New York City, one of the nation’s epicenters. In Danbury, roughly 35 miles northwest of New Haven, the city has been able to house roughly 70 people a night who are homeless.

Due to the speed at which clients are being relocated, there is little time to secure necessities and the priority is getting people into housing as soon as possible. Columbus House has therefore been forced to improvise when it comes to getting mattresses, toilet paper and other basic supplies, as stores remain shut and the public hoards household items.

And while healthcare workers should be and are on people’s minds, Meaden said it is also the social service workers on the front lines ensuring the unsheltered homeless population, its most vulnerable aren’t forgotten about.

“This is something that affects every human being,” she said, “and we have to solve these problems together and not say you’re poor and I’m rich so you’re on your own, that doesn’t really work. That’s not how the world is working.”