A nation in strife births a new generation of leaders 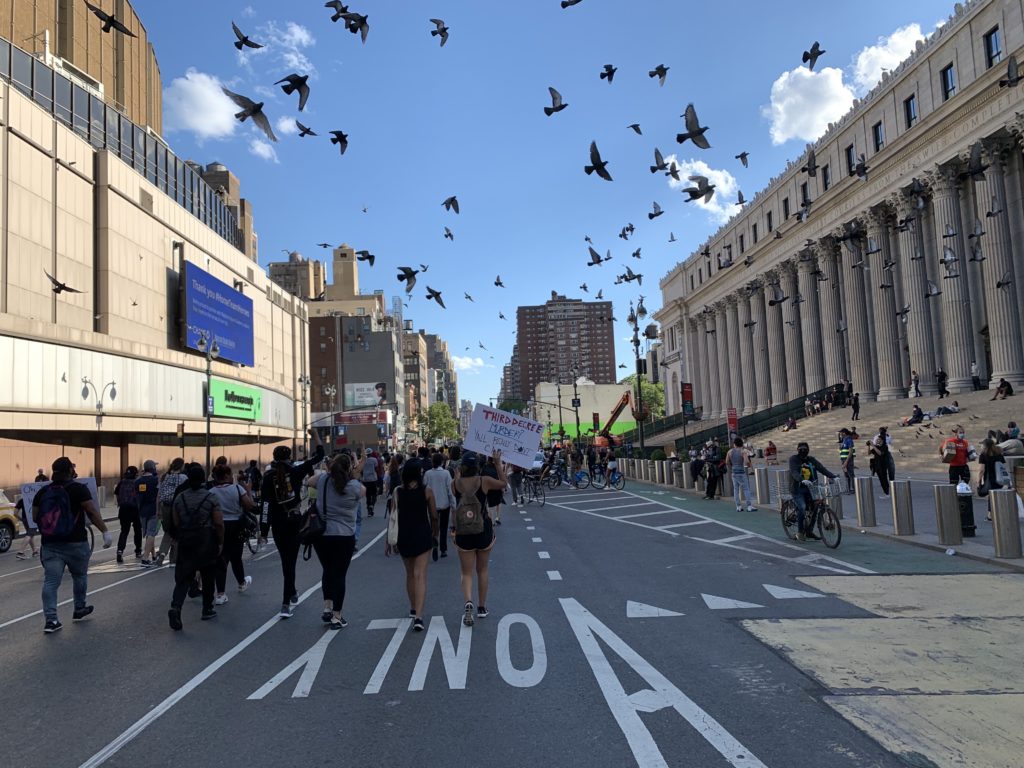 Taunts from the crowd were loud enough to drown out the automated message blaring from the speakers of nearby police vans, ordering protesters to disperse. But, instead of swarming the demonstration like many expected, the police in their riot gear retreated — giving ground to another, larger body of protestors that had rounded the corner to join Davis’ group. As a few dozen became a few thousand in an instant, the protesters set off on yet another long march towards lower Manhattan.

Davis wasn’t a protest leader in the traditional sense – she didn’t organize marches or plan demonstrations. Instead, she saw herself as someone fighting an information battle, trying to reach the hearts and minds of the generation that came before her.

“I’ve had issues explaining to the older generations,” said Davis, who is half Jamaican and half Italian. “There’s a real lack of understanding of what’s going on. But this is our fight. My generation doesn’t have kids yet. Most of us are just starting to choose our life paths — people fear they won’t make it past 22. It affects everyone, but the change is going to come from younger voices.”

While protests against police violence have swept the country since video of the Minneapolis police killing of George Floyd emerged in late May, the national conversation has often been usurped by stories of young people capitalizing on the moment to loot stores and damage property at night. In New York, local media has reported that many of these looters have been in their twenties.

But amid the estimated 15-26 million demonstrators nationwide since protests began, a crop of young leaders is rising. Instead of taking aim at storefronts with crowbars and rocks, they’re using their voices to move masses and highlight the system of abuse existing between law enforcement and minority communities. With a pivotal election on the horizon, the challenge for protestors is channeling the enthusiasm and activism of the masses into the electoral process.

Nationally, protestors are organizing to connect national and grassroots movements into a unified front — one that can dictate a concise social and legislative agenda. Next month, Movement for Black Lives activists will host a live-streamed Black National Convention with around 150 different groups participating. Convention organizers plan on setting a new agenda meant to function as a list of demands for the first 100 days of a new presidency. The success of that agenda, however, will depend largely on who wins the 2020 election. Organizers across the board are trying to ensure that the momentum seen among the youth now will translate into votes come November.

Perry Grossman, Senior Staff Attorney for the Voting Rights Project at the New York Civil Liberties Union, says the rising political action from young people can be carried through to the election. “Just because the protests are ending doesn’t mean the organizing ends. First of all, everyone should make sure that they’re registered to vote and that their registration is current. And then once you’ve done that, make calls to your legislators, send them emails,” he said. “People don’t realize just how valuable their activism is. So those calls matter, those emails matter, those tweets can matter. That’s an everyday thing you can do.”

With the election months away, sustaining the movement, and the activism that keeps it front and center in the national consciousness, is key. For many protestors, their brief experiences on the frontlines have already had a lasting personal effect. Kyle Fargardo, 25, is one of them. He was among five young protesters leading a march of thousands through Manhattan. The youth basketball coach from Brooklyn weaved in and out of the crowd from atop a bicycle, shouting commands and helping fellow protest leaders make up the march’s route as they went along in an attempt to confuse police. It’s his generation that holds the power to advance the work of civil rights activists of decades prior, he said.

“We’ve been through 9/11, we’ve been through Ebola, SARS. We’ve been through a pandemic,” he said. “So us, as the younger generation, for the future of mankind, have to put ourselves on the front line to show people that we can be better. Because if we don’t do it, nobody will do it. Everybody was in their 20s and 30s because everybody is sick and tired of dealing with the repetitive cycle that this system brings.”

With the winds of a massive movement behind and ahead of him, Fargardo says he will be voting for the first time this November. He hopes other protestors will do the same.

“The main reason why I decided to actually take my vote seriously,” he said, “is because I feel that we’re in an unpredictable state as the whole United States. I’m not gonna be one of the people that doesn’t vote but goes to protests, because that doesn’t make sense.”

While the youth have been lauded for sustaining the movement thus far, they are notoriously spotty voters. However, this year Generation Z’s first-time voters will make up 10% of the electorate, according to the Pew Research Center. They have the potential to shift the political landscape, says Caitlin Donnelly, Program Director at Nonprofit VOTE, a national nonpartisan organization that helps promote voter participation.

“Protests and actions against police brutality will impact youth turnout positively,” she said, referring to the 2020 election. “Though we may not see an increase in the youth turnout rate due to other factors.” Donnelly mentioned that those other factors include decreased voter registration due to the pandemic and divisive partisan rhetoric around election reform measures. But, she added, “The protests and movement behind them are unlikely to fade from voters’ consciousness before local campaigning gets into full swing, so we may see this issue become part of the larger narrative of the 2020 election.”

But the road from protest participation to voter participation is filled with obstacles. Even in a progressive state like New York, registering to vote is not a seamless process, particularly for minorities. Grossman points out that you can register to vote online, but only if you have a New York state driver’s license. Many young people in NYC, and recent transplants who still have their previous state’s ID, don’t have the means or the need to have a car, which forces them to go through a much longer and more cumbersome process if they want to register.

“That means that you have to go find a form and fill it out with ink, bring it to the Board of Elections or put it in the mail,” said Grossman. “We also have a really long voter registration cutoff. You have to be registered to vote at least 25 days before an election in order to vote in that election. That’s crazy. Lots of other states let you register a vote right up until Election Day.”

For organizers like Grossman and Donnelly, the fear looking forward is that now that the massive protests have passed, the pressing immediacy for continued activism on the individual level will fade. Bee Davis, the Pace University freshman, had marched throughout the day and past curfew alongside crowds that stretched across wide New York avenues. It is tenacity like that, witnessed over weeks across dozens of separate demonstrations, that makes Davis says the youth will be as dedicated to voting as they have been to protesting. There is a widespread understanding now, she says, that remaining relevant means they need to stretch their efforts into the months ahead.

“We have to change the system, and that’s going to happen by voting certain people in,” she said. “If we do all this and can’t change the people in charge, what’s the point.”