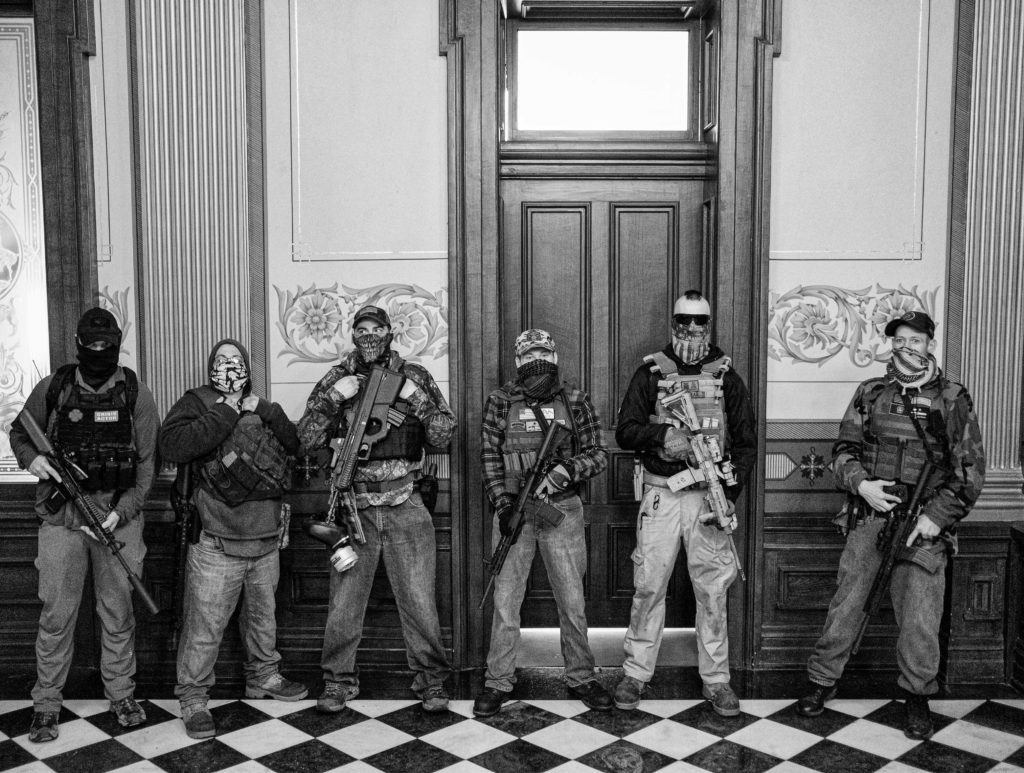 A militia group with no political affiliation from Michigan, including Pete Musico, on the right who was charged October 8, 2020 for his involvement in a plot to kidnap the Michigan governor, stood in front of the Governors office during protests at the state capitol in Lansing, Michigan on April 30, 2020. (Photo By Seth Herald-Reuters/ GroundTruth)

DETROIT  — The political battleground of Michigan has drawn President Trump and former Vice President Biden to the frontlines here as local skirmishes in the courts over gun rights at polling places and rising concerns of intimidation by armed militias pit two constitutional rights against each other: the right to vote and the right to bear arms.

Like many voters, Lucille Roberts, 72, said she cast her ballot early to avoid potential violence and the looming threat of the coronavirus at polling stations.

“I don’t want COVID, and I don’t want to get shot. […] I just want to vote,” said Roberts, as she made her way across the street near the town hall in Warren, Macomb County, a largely suburban community north of Detroit which voted heavily for Trump in 2016.

“It shouldn’t be like this,” she added, her words muffled through a mask but revealing a tone and a look in her eyes that seemed to land somewhere between bewilderment and despair.

With a dark cloud of COVID and the looming threat of violence hanging over the last days of the campaign, Trump held a rally in a suburb just outside the Motor City Friday night, and Biden will be making his first campaign stop with President Obama at his side on Saturday here and in Flint.

The crescendo of the campaign in this swing state comes after months of simmering violence, including a thwarted plot by far right extremists to kidnap Governor Gretchen Whitmer. Whitmer, a Democrat, imposed stay-at-home orders during the first months of the  COVID-19 pandemic, stirring the ire of far right extremists who showed up in Lansing in April at the State Capital building with assault rifles and tactical vests.

Amid threats by the heavily armed militias over the summer and into September, Michigan Secretary of State Jocelyn Benson issued an order on October 16 to ban the open display of firearms within 100 feet of polling places, clerk’s offices and any place where ballots would be tallied. It was cast amid simmering concern about a surge of paramilitary activity throughout the year, and potential for armed volunteers watching the polls, urged on by President Trump who called on his supporters to “go to the polls and watch very carefully” for fraud.

The order received immediate backlash from pro-gun groups and activists, who said they believed the Secretary of State had exceeded her authority. In some cases, gun owners said the order pushed them to head to the polls armed on Election Day. “Just to prove we can,” said Zac Stewart, 28, at a recent demonstration in Allendale.

On Tuesday, a state judge struck the order down. Attorney General Dana Nessel has vowed to appeal, but with under one week until Election Day, time is running out. If the order is not reinstated, voters, activists, and lawmakers alike fear that threatening the safety of the polls could have a tangible impact on the election in this pivotal swing state, where President Trump won by just under 11,000 votes in 2016.

The Armed Conflict Location & Event Data (ACLED,) a non-profit organization that tracks and analyzes political violence globally, released a report this month that placed Michigan among five states in the country at the highest risk for increased militia activity. The report claims that the FBI and NSA have identified extreme militia movements as a major risk factor, describing the election as a potential hotbed for violence.

Alongside the speckling of small, local militias throughout the state, the Boogaloo Bois and Proud Boys are two mainstream militias with the strongest presence in Michigan. During the first presidential debate, when Trump was asked to denounce white supremacists and the Proud Boys were offered as an example, he didn’t. Instead he said, “Proud Boys — stand back and stand by.”

At a Trump Rally in Lansing on Tuesday, members of the Proud Boys could be seen doing just that. They stood calm and collected in the fifth row as the jet wheels of Air Force One touched down on the runway and the sea of red hats and red fists erupted around them. Asked by a reporter in the crowd if they plan to guard the polls per Trump’s order, they declined to comment.

To those in Michigan, the threat of poll watchers disrupting the election and political violence in the days that follow has become an intense subject of conversation. On both sides of the political spectrum, it’s not only feared, it’s expected.“I can’t see any scenario in which it doesn’t go down,” said Roger Urso, a chef at the University of Michigan campus, who said he doesn’t plan to vote.

“I’m a strong defender of the second amendment. Generally I am not a fan of gun control, and that’s because I don’t like the idea of the state have a monopoly on force,” said Tristan Taylor, 37, an organizer and co-founder of activist group Detroit Will Breathe, a movement that he said was formed on the streets of his city this summer in the midst on an international movement against police brutality. “But this isn’t some abstract argument around gun rights. This is an argument around whether or not we think voters, particularly black and brown voters, deserve to be protected from intimidation at the polls.”

The predominantly white suburbs and rural areas of Michigan are traditionally Republican strongholds. But the threat of voter intimidation at the polls is felt as especially consequential in the larger cities, including Grand Rapids, Lansing, Warren and Detroit, where high Democratic voter turnout in communities of color often tips the surrounding counties blue.

With President Trump accusing Democrats of trying to “steal” the election, refusing at one point to commit to a peaceful transition of power, the vocabulary surrounding election day has grown increasingly desperate. This month, Eric Trump called for “every able-bodied man, woman to join the Army for Trump’s election security operation . . . we need you to watch them.”

“My biggest concern, and I’ve been working at the polls for a few years, is to have some of these yahoos come in here with some of these guns,” said Cynthia Willoughby, 65, who is planning to volunteer in the Highland Park district of Wayne County. She said she would leave her station if armed poll watchers show up. “I want people to vote. But I’m not going to lay my life down for it.”

Pete Walsh,  a member of the ACLU’s West Michigan lawyers committee, described the fear coursing through every corner of the states from big cities to small towns and said he shares law enforcement officials’ concerns that the militias will bring guns to the polls: “It is definitely something we are looking out for, whether we can do anything about it is another question.”

Kim Benedict, 56, was planning to volunteer as a poll watcher in Grand Rapids until talk of armed militias showing up began to surface in conversation and online. She decided to vote early. “There is absolutely nothing that could get me to vote in the city of Grand Rapids this year with what is going on,” she said.

Despite this kind of understandably cautious approach to potential violence at the polls, there are many in  Michigan who aren’t gun shy. Since the pandemic began, gun sales have surged on both sides of the political spectrum, perhaps the only unifying corner of a deeply divided electorate in a battleground state.