ON THE GROUND IN MINNEAPOLIS, MN

A memorial against injustice, a call for change 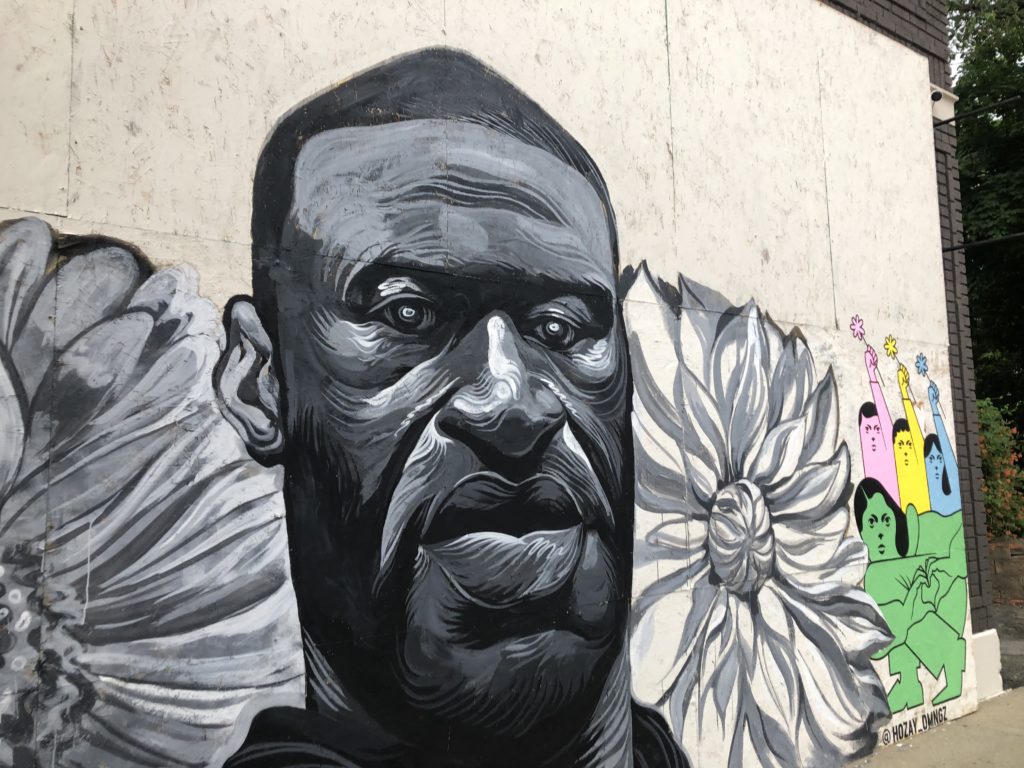 Mural of George Floyd on a wall in the Lowry Hill neighborhood of Minneapolis, Minn. (Photo by Zoë Jackson/Star Tribune)

MINNEAPOLIS — A block away from where George Floyd was killed, there is a graveyard. It has not been there long, sprung from the pain of the community and the country in the wake of another police killing of a black man.

The same grief and action that have manifested in nationwide protests, riots and the ignition of governmental change are keenly felt in Minneapolis. Anger and hope became a cemetery, created from corrugated plastic and paper. The 100 headstones each bear the name of a black person killed by police: George Floyd, Philando Castile, Breonna Taylor.

Entitled “Say Their Names Cemetery,” the project was created by Anna Barber and Connor Wright, artists who came from out of state to build this humble monument to the nation’s grief. Not unlike many newly-minted activists protesting for days on end in Minneapolis and across the country, they’re recent college graduates. The artists can’t be there constantly to watch over the project, constructed over a grassy plot, so the community has stepped up to do it, said Wright, who last Wednesday helped a young boy re-glue a handful of signs. They collectively ensure the headstones haven’t fallen over or been damaged from rain; that they are upright, that they remain bright.

People leave flowers at the headstones. They gather too, sitting in socially distant circles on small hills around the open space, under the trees. They talk, laughing among one another, making plans. They pace, reading every name, and wander between the art installation and the intersection of 38th and Chicago, where Floyd was killed.

It is a short walk to the spot, through a quiet block of homes. If it weren’t for the signs bearing Floyd’s name or ‘Black Lives Matter,’ it might’ve looked like any other. But no, here is where Minneapolis police officer Derek Chauvin knelt on his neck for seven minutes and 46 seconds. It has now been informally renamed “George Floyd Square.”

The surrounding area has been blocked off for more than three weeks. Community members keep a watchful eye, ensuring that police officers did not go near it in the early days, and to keep the site decorated with flowers and art. Outside of Cup Foods today, Juneteenth, there are all the signs of mourning that were there back on June 4, when Floyd’s funeral service was happening across town. The sermons were broadcast over speakers to a large crowd that cried and prayed among piles of flowers both bought and donated.

The community memorial is the only place I have been on assignment since arriving in Minneapolis three weeks ago. The stories of people risking exposure to the coronavirus in order to gather there are those that cannot be told by phone interviews or Zoom calls. Perhaps that’s why the memorial is so powerful: the risk is clear, making it even more necessary for people to show up.

Though the grief out there is palpable, it was strangely uplifting to witness the beginnings of change, the coming together.

There were people with petitions, with food to donate, with ways to help. Even as we now enter the fourth week of nationwide protests, the momentum does not seem to be dying down. The memorial outside of Cup Foods keeps on growing. Artistic works and expressions of community have sprung up around the city. There’s a large metal fist surrounded by flowers that was not there last week, a symbol of black power.

As time passes, tears and hunched shoulders have morphed into determination. At both the community memorial and the cemetery, people are eager to talk to reporters and one another, about the sign they made, the supply run they are contributing to or the books on their anti-racism reading list. Some point out their favorite murals, and others create their own in hopes of community healing. The future is on everyone’s minds — one where black and brown people won’t stare down death during encounters with police.

Even as the wooden boards on local businesses — from restaurants to record stores — continue to come down, protests and conversations continue. Just around the block from my apartment, a coffee shop was decorated in small signs with quotes and messages. One was from black journalist Ida B. Wells, who investigated lynching in the South during the 1890s: “The way to right wrongs is to turn the light of truth upon them.” The art calling for justice for Floyd, for remembrance, remains.

A cement building brightly gives ‘love to all who fight for justice.’ Outside of a nearby store, a quote from Floyd’s daughter, Gianna, reads “Daddy changed the world.” It is easy to smile at a mural exclaiming, ‘I love being black!”

With his life and his death, George Floyd changed race in America, shifted it, reminded us of its slow-turning dial. His death has changed the way we report on it too, a long time coming. It can be difficult to focus on the future in the wake of such tragedy, but here in Minneapolis, the good is just as hard to miss.

Zoë Jackson covers young voters for the Star Tribune. This dispatch is part of a series called “On the Ground” with Report for America, an initiative of The GroundTruth Project. Follow her on Twitter: @zoemjack.