‘Welcome to history’: MLK’s legacy lives on in a march for Black lives 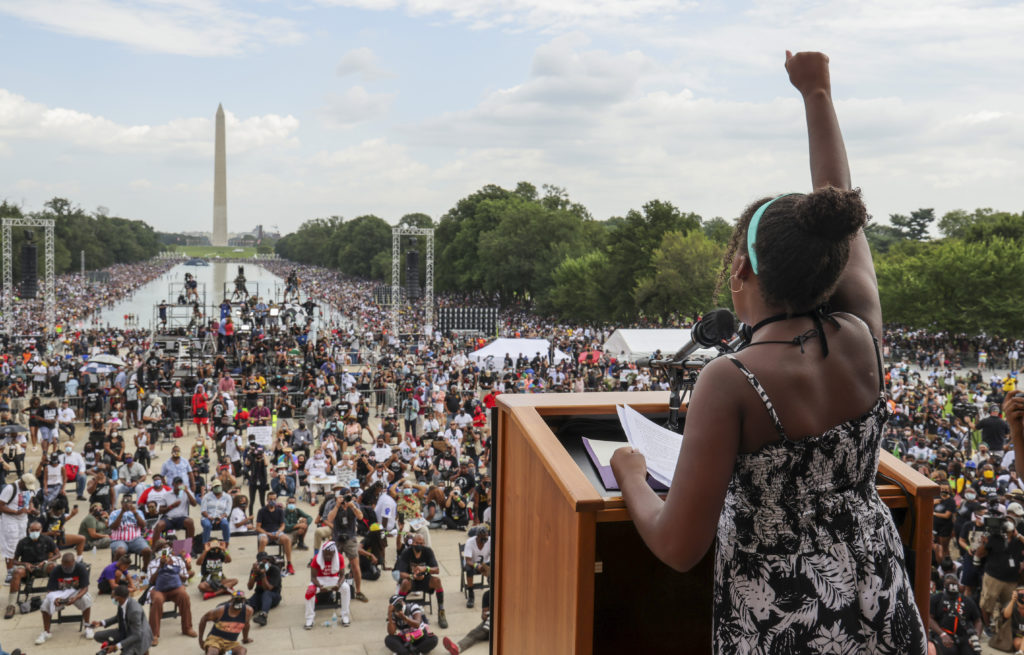 WASHINGTON – Sometimes your heart knows the answer to a question before your brain does.

On the eve of an extraordinary gathering of Americans to push for racial equality and justice, my heart knew what I needed to do. Despite an injured ankle that makes it hard for me to move fast, despite reports that COVID-19 kills more Blacks and Hispanics than any other race, I knew I had to be there.

I headed downtown toward the Lincoln Memorial, less than 15 minutes from my house on a fiercely hot Friday morning, to observe history.

“As soon as I heard this march was happening, I knew I wanted to go. Why not?” said my Howard University classmate Audrey Calloway, 51, who drove 500 miles from Cincinnati to be there and stood in line for an hour to have her temperature taken before being allowed onto the National Mall.

“I thought, ‘Welcome to history.’ How can you not?” she said.

Thousands of Americans of all races came from far and wide Friday on the 57th anniversary of the 1963 March on Washington for Jobs and Freedom for a slightly different kind of march. This one was fueled by social media, bolstered by virtual participation and sparked by repeated killings of unarmed Black men and women by police officers in cities around the country.

It was after the shooting of 29-year-old Jacob Blake in Kenosha, Wis., earlier in the week that Petra Hostetler finally decided to also take the almost eight-hour drive from Cincinnati to attend the march.

“[Before the shooting] I was thinking this is something I could stream and be able to watch. But that week I saw Jacob Blake get shot seven times and I was like, ‘That’s it. I can’t. I just cannot sit here.’ I had no peace until I decided to go,” said Hostetler, the mother of four biracial children. Her youngest, 5-month-old Jerusha, cradled in the backseat with Hostetler while a friend drove.

As she watched Martin Luther King Jr.’s 12-year-old granddaughter Yolanda Renee King speak from the same place the Rev. King had spoken from nearly six decades ago, Hostetler thought of her own children and what her presence at this march would mean to them one day.

“Her speech was full of power and commitment. Her speaking was just giving me feelings of if my daughter was up there, what would she be saying and declaring on my behalf and of my legacy?” said Hostetler, 35.

For so many of us, to say that the march was empowering is to make the experience too simple, too light. To be in one place with so many Black people of different hues, religions, regional dialects standing in solidarity and single purpose was life changing. For my younger friends, it also brought to life the photos in history books.

“Me and my sister were saying this is absolutely a history moment. We have all these epic photos in our mind and we were like, ‘We are living those days,’” said Noel Benitez, a 35-year-old interior decorator who lives in Washington.

For those of my generation, the very mention of masks recalls the poem “We Wear the Mask” by Paul Laurence Dunbar:

We wear the mask that grins and lies,

It hides our cheeks and shades our eyes, —

This debt we pay to human guile;

With torn and bleeding hearts we smile,

And mouth with myriad subtleties.

Why should the world be over-wise,

In counting all our tears and sighs?

Nay, let them only see us, while

We wear the mask.

We smile, but, O great Christ, our cries

To thee from tortured souls arise.

We sing, but oh the clay is vile

Beneath our feet, and long the mile;

But let the world dream otherwise,

We wear the mask!

“The physicality of the masks on people’s face intensified that idea of being a warrior in this fight in a very moving way,” said Benitez. “That mask, especially because you can wear so many messages on it almost feels like armor. It’s like you are representing what is on your face.”

For Levander Brown, a 27-year-old personal trainer from San Francisco and the host of The Forum podcast, just seeing so many Black people in one place was astonishing.

“It was a chance to be around more Black people than I’ve ever been. To see that many in D.C. was even more powerful and it made me feel more proud to be Black,” said Brown, who flew to Washington with friends and family. “I saw a flag that was colored in black, green and red and it had Black Lives Matter on it and a map of Africa and it was flying high and there were people chanting and wearing African clothing. It showed a sense of pride.”

What was notable was the large number of white people in the crowds. At the 1963 march, there were an estimated 60,000 whites in attendance out of a crowd of an estimated 250,000. It is too soon to say how many white people participated in Friday’s march. On Friday, they were holding anti-racism and justice signs and flags, providing free water and snacks.

Hostetler, whose husband is white, said she feels an added weight, being surrounded by white friends and family members and fighting for justice for Black people.

“There is something about this added weight where you are living in this parallel universe with your white friends,” she said. “These white people who you work with everyday … and yet they are not with you.”

Her voice is heavy when she gets to this subject. “You expect more out of your white friends and I don’t think that our parents expected that. It’s this heartbreak you go through. It’s like, ‘What, you don’t support this?’ said Hostetler.

Calloway had her own perspective about the white people that attended the march: “There have been times when I see white people participate in Black Lives Matter and I appreciate that they are standing up [in] the march. But I didn’t feel like they need any additional gold star because they were there, but I also didn’t feel a need to engage with them.”

But she engaged anyway. Calloway stood next to one white protester who told of driving from California, making stops at civil rights monuments along the way.

What will Calloway take back to Cincinnati with her? Laughing, she said, “I am going back with a sense that I don’t know that I want to be there [in Cincinnati]. Where can I be that feels like it felt to be here?” One thing she knows for sure is that as the mother of a 23-year-old son, she is grateful not to be one of the mother’s addressing the crowd from the podium.

It is exactly her son and others like him who my generation hope will lead the charge ahead.

According to YPulse, 52% of Gen Z (those born between 1997 and 2012) say the Black Lives Matter movement has had a major impact on their world view, while the trend analyst group Stylus, reports that 55% of Americans between the age of 16 and 34 (Gen Z and millennials) have attended a BLM protest.

The bad rap that millennials get, she said, may be changing in light of the way they are representing themselves in the movement for racial justice. “I think the world can say ‘Hey these millennials have a good idea.’ I think they can be looked at in a more praising way instead of as a mockery.”

While Brown said he personally has not experienced much racism in northern California because “it’s multiracial and everyone generally gets along,” he said his generation is “not only tired of seeing history repeat itself, but we want to see real change.

“The most actionable thing for us to do is follow what the older generation did before us and to take it a step forward and be peaceful, more intelligent about our protest and more strategic. … We don’t just have word of mouth, we have social media. We have a platform. And we also have some generational wealth.”

Brown points to Rep. John Lewis, a man he found out about only after Lewis’ death in July, as an example of someone who worked to change the system from the inside.

“My friends want to find a way to infiltrate the system and find a way to make a change from the inside out. That’s what my generation can bring,” said Brown. “It’s not even a duty. It’s pretty honorable to be a part of this. If we can be a little bit of a part of this, then we can write ourselves into history as the generation who infiltrated the system to eradicate police brutality and racism.”

After listening to his optimism and confidence, I can’t help but hope he is right. I really do.

Alison Bethel McKenzie is director of corps excellence for Report for America. An award-winning, veteran journalist and a Southerner, she has worked in senior-level editorial positions at The Boston Globe, The Detroit News, Legal Times, the Poughkeepsie Journal and the Nassau Guardian (The Bahamas). She is the former Washington Bureau Chief for The Detroit News and was executive director of the Society for Professional Journalists and the International Press Institute in Vienna. Alison was also a Knight Fellow for the International Center for Journalists and a visiting professor of print and investigative journalism at the Indian Institute of Journalism and New Media.