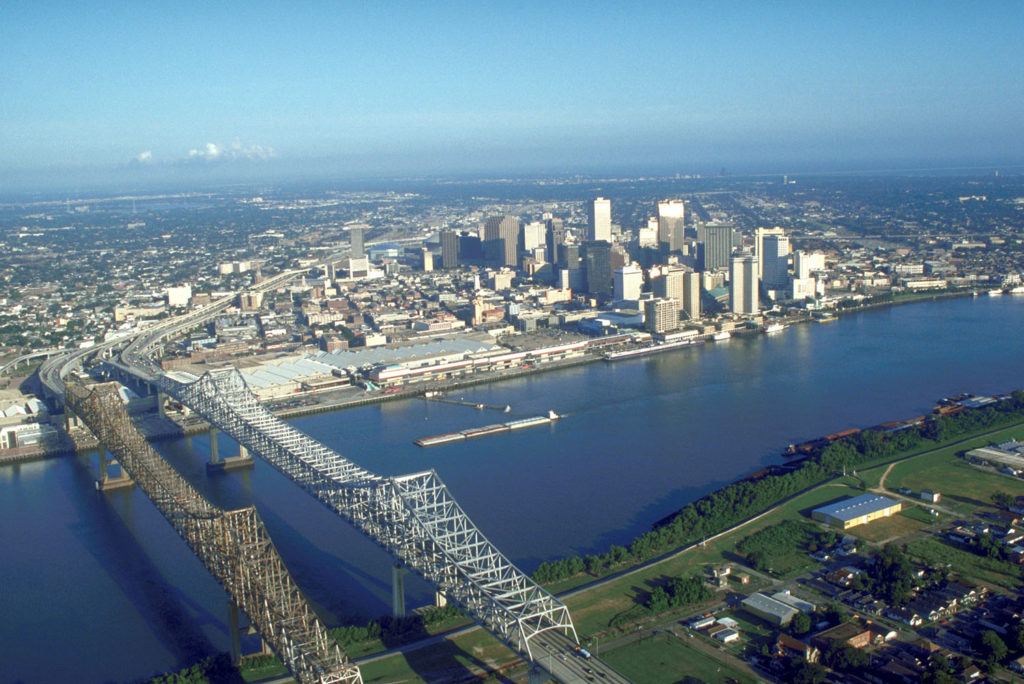 New Orleans is sinking and therefore vulnerable to flooding and storm surges.

NEW ORLEANS – The Pentecost Baptist Church in Gentilly is pristine, with freshly cut grass, a well-kept garden and a spotless brick facade.

However, the church is surrounded by remnants of Hurricane Katrina. Empty lots and mud now replace houses that once neighbored the church.

Reverend Lionel Davis has worked at the church for 15 years. He has an even longer relationship with the community of Gentilly, a middle-class area in northeast New Orleans. He rebuilt his house and the church after they were destroyed by Katrina.

But like most of New Orleans, Davis’ neighborhood sits below sea level and is sinking. A constant risk of flooding looms – even from just a regular rain storm.

Last month, Southeast Louisiana experienced the worst natural disaster in the U.S. since superstorm Sandy – with flooding up to 26 inches, it’s yet another reminder of the state’s vulnerability and the need to properly prepare for climate change. Members of Davis’ congregation, who used to commute from Baton Rouge every Sunday, have lost everything. They struggle to put their lives back together.

A new federal  plan for this area of the city, called the Gentilly Resilience District, hopes to prevent flood damage from the next devastating storm. The $141 million plan will create a model that can be replicated across New Orleans.

But Gentilly residents say that there’s a major flaw in the planning and development of the Resilience District – the utter lack of community input.

“If the government is going to bring confidence to the communities, then the conversation must be inclusive with the community,” said Davis, who also serves as Neighborhood Association President. “If not, they’ll be speaking for us without ever speaking to us. That is where the folks in Gentilly are upset.”

With design already underway for the Resilience District, a lack of community engagement puts the effectiveness of the project – and the value of a multi-million dollar grant – at stake.

“If this is not done with a clear understanding of what the community needs and how the community will benefit, it’s going to be a very inefficient, questionable and ineffective way to spend a huge sum of money,” said Keith Twitchell, president of the Committee for a Better New Orleans, a local nonprofit that promotes citizen engagement across the city. He pointed to other failed real estate projects across the city that could have been more successful if they had incorporated feedback from the community early on.

Louisiana is experiencing the highest rate of relative sea level rise in the world, with a 4.3-foot increase expected by 2100. That would put New Orleans – the state’s largest city – almost entirely underwater.

Most of New Orleans is already below sea level, and Gentilly is even lower. It is sinking at an increasing rate due to subsidence, a natural occurrence caused when sediments in the ground are compacted and consolidated. This natural process is accelerated when fluids such as water or oil are extracted.

Gentilly was one of the hardest-hit neighborhoods by Hurricane Katrina, with many parts seeing flooding over 10 feet. Even minor rain puts the community at risk for flooding.

The Gentilly Resilience District aims to reduce subsidence while also protecting the area from potential floods. It will address these issues by “living with water” – the plan embraces the geography of New Orleans instead of fighting it.

“As subsidence takes place, the elevation goes down and the flood risk goes up,” said Jeff Williams, a senior research coastal marine geologist with the USGS Woods Hole Science Center. “It’s good to recognize the geography and learn to live with it.”

“At the end of the day, what we’re doing in Gentilly, we can learn from it and we’ll have positive replicable implications throughout the city,” said Charles Allen, resilience outreach manager for the New Orleans Redevelopment Authority (NORA), which is overseeing implementation of parts of the project along with city officials and local architecture firm Waggonner and Ball.

The plan is just getting underway. Most of the project sites look like empty grass lots, abandoned since Katrina.

But soon, Allen says, these lots will be transformed into parks that thrive in dry conditions and can remove stormwater from the streets to prevent flooding. During a major rain storm, these parks can hold up to 2,200 bathroom tubs of water.

These “water gardens” may help only flooding and subsidence in their immediate area, but once a network of gardens are built, flooding throughout Gentilly will be reduced.

“If you have one water garden, it won’t benefit the whole block, but the network of projects in a given area will work together,” Allen said.

“Just trust that we know”

The climate adaptation plans for Gentilly may be well-intentioned, but without input from residents, activists like Keith Twitchell say it’s unclear how effective they will be.

“There’s the question of, if we do this, are we truly benefitting all the communities?” he said. “Is it going to be based on favoritism? Is it going to be more beneficial to those of a better economic status? Are we going to prioritize the needs of the neediest? … It’s just not possible for someone in city hall, even if they go out and walk the neighborhood, to understand what the communities needs are going to be.”

“It’s always, ‘We’re going to do it,’ but tomorrow never comes,” he added.

When asked about community participation in the project, Allen said that some NORA meetings have already taken place to solicit resident input, and more will be planned as construction continues.

“Since we’re not doing all of the projects at one time, this engagement will take place over time,” Allen said. “We will be rolling out on meetings with more projects in neighborhoods in the next month, next few months, and year.”

Jared Brossett, New Orleans City Council member for Gentilly’s district, has held a number of meetings to inform the public on the Resilience District. He agrees that engagement will increase as the projects roll out.

“Once the [projects] have been fully designed, the contract has been selected, and notice to proceed has been given, then they’ll have more engagement,” he said.

“In a perfect world, as soon as the city decided to apply for this [grant], they would have gone out and gone to the neighborhood association meetings in Gentilly and said, ‘This is what we’re thinking about, here’s some ideas were throwing out, let me know what y’all think,’” Twitchell said.

That hasn’t happened, according to residents.

“We listen to leaders saying, ‘This is a lot of money to help the Gentilly area but with this project, you don’t need to know what it is, just trust that we know,’” Reverend Davis said.

Davis attended some city meetings and says he has reached out to both the city and NORA for answers. He says the response is to wait for more information.

The situation in Baton Rouge has increased Davis’ frustrations with the government’s response to flooding.

“It seems to be repetitions in this state without any real overall work as to what could better the conditions of the overall area,” he said.

Gretchen Bradford, another Neighborhood Association President in Gentilly, said that the project sounds like a good idea, but because this is the first such plan to begin in New Orleans, it is hard for her neighbors to have trust in it.

“Suppose all these projects don’t work, and we’re more flooded,” she said. “We don’t know.”

Residents like Bradford and Davis want a say in determining how and where in the community the money will be spent. Given that flooding has a far-reaching impact – from impacting mosquito control efforts to sewage infrastructure – residents want to make sure their neighborhood gets the most that it can.

Gentilly community leaders are also skeptical of how the Resilience District plan will impact other public services, such as scheduled maintenance for the roads.

“We had street repairs that were slated for this area a year ago, and two years ago,” Davis said. “We were told that they had the funding allocated for that separate. Now, we are being told that, because of this, we have to wait. I don’t know if they’ll push the repairs off, or they may put us in a timeline that is behind some others who may be preferred before us.”

“Partnership is saying let’s do this together”

Twitchell believes the solution to a lack of community engagement across New Orleans is to create a permanent feedback structure called a “citizen participation program.” He has been advocating to put one in place since 2010, with the belief that it would not only invite input from residents in community matters, but also help continue the legacy of community spirit that began in the months following Hurricane Katrina.

“I think that we continue to have much higher levels of community engagement now than we did pre-Katrina, but it is fading a little bit,” Twitchell said.  “That is why we’re working so so hard to put in a permanent structure. There has to be something in place to sustain it.”

A 2013 study that looked at the connection between climate change adaptation and community engagement found that policymakers can benefit from facilitating public engagement around climate issues that will directly affect their community.

Many of the projects for the Gentilly Resilience District remain in early stages of design and construction, but locals are hopeful that more public inclusion will improve the overall success of the project.

“I hope we’ll end up, a few years from now, looking back at these projects and say, ‘Wow, this was great, this was transformational.’ But it still needs to be done the right way, which is in true partnership with the community, not by saying ‘Here’s what we’re going to do for you,’” Twitchell said.  “Partnership is saying let’s do this together.”

For Davis, partnership is also a legacy he wants to leave behind.

“Looking at my son and grandson behind me, I have to make sure that they have representation that will be able to conscientiously make decisions for them,” he said. “So for the neighborhood to move forward, somebody has to speak up.”