A fact-checker’s intro to the Motor City 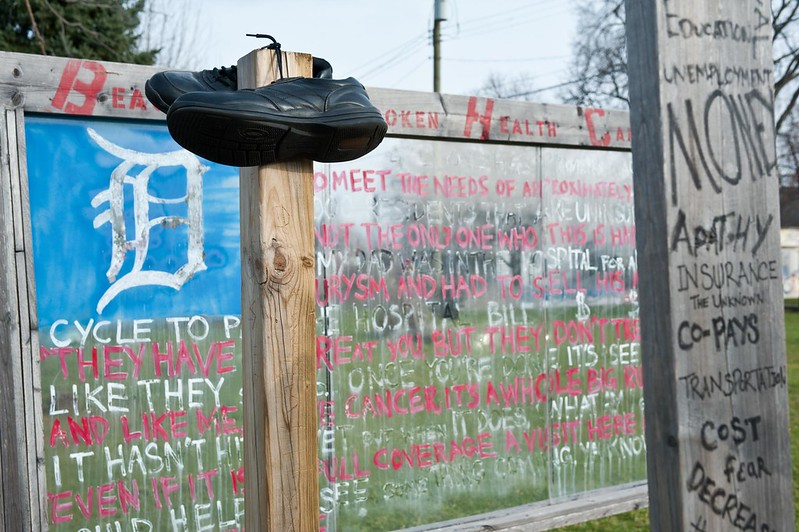 Shoes hang next to a mural in Detroit. (Courtesy of the Heidelberg Project)

DETROIT – The streets were quiet in Detroit after the coronavirus forced residents inside and businesses to close. That is until protests against police brutality swept the country, and Detroiters took to the streets to decry racial injustice. Colorful altars and street art around the city pay tribute to the lives lost in the summer of 2020.

Detroit’s economy was fragile even before the coronavirus hit, which has resulted in the deaths of nearly 1,500 residents. Buffeted by a public health crisis and an economic recession, the people of Detroit are demanding greater investment in the city’s communities as long-standing racial and economic disparities are freshly exposed.

And against a backdrop of ongoing issues in the police department despite years of federal oversight, due to its use of excessive force and illegal detentions, some here are questioning whether local law enforcement agencies have been disproportionately propped up at the expense of services that ensure community well-being and address systemic inequality.

“Detroit spent $294 million on police last year, and $9 million on health,” Rep. Rashida Tlaib, D-Detroit, recently wrote in a tweet that called for defunding the police.

She was citing numbers from Detroit’s Comprehensive Annual Financial Report, published by the city’s Chief Financial Officer, but the data itself was slightly incorrect. The Police Department actually spent $294.9 million from the city’s general fund — its pot of money for general governmental operations — while the Health Department spent just under $9 million. Because Detroit’s police and health departments are funded in very different ways, the general fund figures only provide a snapshot of funding for law enforcement activities and health care programs, but to look at them alone is to see inaccuracies in the annual financial reports.

The city’s own reporting shows general fund contributions to the Health Department budget dropped from $182.6 million in 2017 to about $9.6 million the following year. In reality, the department’s 2017 budget was approximately $5.2 million — a $177 million difference — and in 2018, its budget grew to almost $8 million. Such inaccuracies pose a significant challenge to adjusting how city resources are distributed.

“The City is working on improving its financial reporting so that we don’t have this type of confusion in the future,” Jessica Byrd, the communications manager for the city’s chief financial officer, said, adding that the figures in the annual report were incorrect.

This kind of reporting is a key element of the public interest, and it’s why the Detroit Free Press has partnered with PolitiFact to meet this need ahead of a consequential election and beyond. It took several days to check all the verifiable information related to the representative’s tweet, an accounting of how much time and diligence, cross-analysis and historical context is required for fact-checking. By providing robust local news, local residents can arm themselves with the critical information they need to navigate the realities of their city.

Related: In Detroit, immigrants paint a rich tapestry of community and culture

And the city’s uniqueness among other postindustrial cities in the U.S. is marked both by its precipitous rise and the dramatic decline that followed. That history is reflected in divides across every aspect of life here — in a city 79% Black — from housing and access to basic services, like water, to more fundamental institutional resources like health care and education. Discrimination in the housing and labor markets prevented Black Detroiters from living in certain neighborhoods and working certain jobs for decades.

Referring to the site of the Algiers Motel, where three black teenagers were killed by law enforcement during the city’s civil unrest in 1967, Detroit activist Frank Joyce noted at a recent march that there ran a “straight line from the Algiers Motel to the murder of George Floyd.” The inability to address long-standing issues of racial injustice, brought into stark relief by the coronavirus and protests against police brutality, are mirrored in the current public health crisis where health disparities are on full display. Fact-checking these realities offers one way to help change them.

“COVID is a symptom. It’s not the problem. It started long before,” said Dr. Shlomo Mandel, who has worked in Detroit for nearly 40 years. The lack of resources such as urgent care facilities and national grocery store chains, Mandel claimed, makes Detroiters particularly vulnerable to disease. Verifiable information that can document these challenges leads to future accountability.

In an increasingly uncertain, tense time, organizations across the city are calling for additional support, and sustained fact-checking can provide them the resources they need to do their work by filling crucial gaps in access to information, context and accountability.

“We know that at the end of the day, all of us —  black, brown or white, newcomer or long-term resident — want a Detroit that’s thriving and communities that have been fully funded and fully invested in,” said Laura Misumi, managing director of Detroit Action, a workers’ rights organization. Misumi made her remark at a recent protest, reported on by the Detroit Free Press, calling for rent and mortgage relief in the devastating wake of the pandemic. That day, a victory was secured: the Detroit City Council voted to approve $31 million in federal funding to help address housing support and other economic impacts of the pandemic.

A constraint on resources has not only impacted Detroit’s ability to invest in its residents, but also its residents ability to track where the money is going. Local reporting and fact-checking are critical tools for voters, activists and lawmakers trying to improve this city, and provide an accurate account to the public. Without knowing where city resources have gone, Detroiters cannot say where they should go.

Clara Hendrickson fact-checks Michigan issues and politics for the Detroit Free Press and PolitiFact. This dispatch is part of a series called “On the Ground” with Report for America, an initiative of The GroundTruth Project. Follow her on Twitter: @clarajanehen.