ON THE GROUND IN CLEVELAND, OH 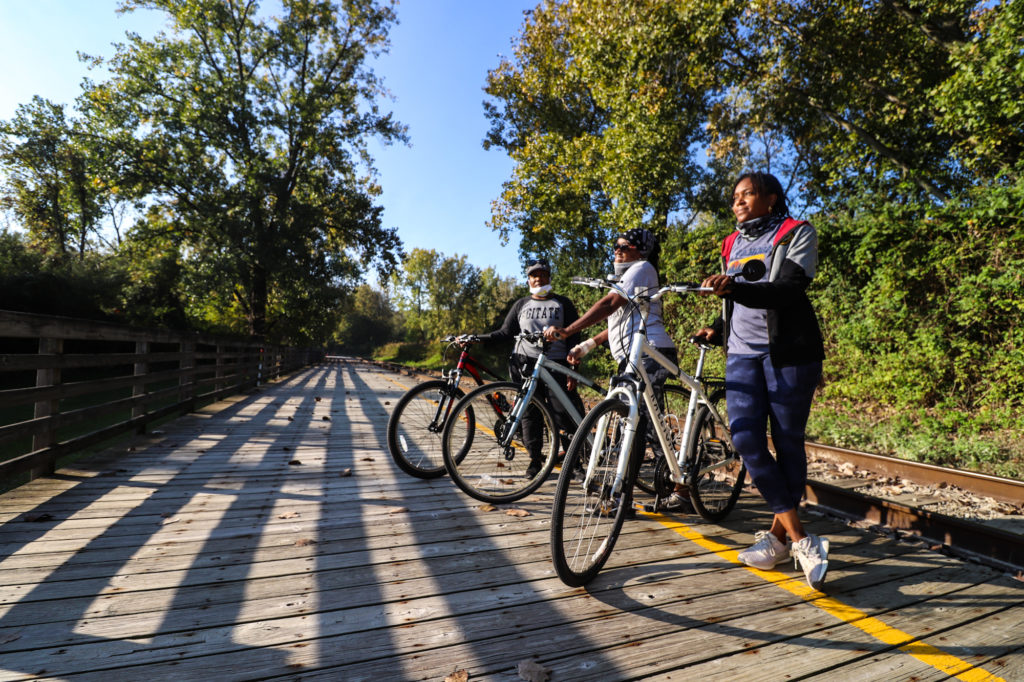 CLEVELAND — Erika Hood knows a little something about Black joy.

On a bright afternoon in late September, she found it in a pair of roller skates.

A dozen kids sat cross-legged on a basketball court in Southeast Cleveland, waiting for directions. After months of social distancing, the kids were restless, and eager to lace up their skates.

“There are cultural barriers that we deal with within our own community that’s, ‘Oh, that’s not for us. That’s for those other people. We don’t do that,’” said Ebony. “And we’re here to show them that’s not true.”

Black Americans have long faced barriers when it comes to recreating in natural spaces and deep, generational fears that contribute to a gap in access, causing many to miss out on the benefits linked to spending time outdoors.

Growing up in Southeast Cleveland, Erika and Ebony didn’t often see other Black people recreating in natural spaces, even as their mother, Marcia, prioritized spending time outdoors. Growing up, the sisters said they felt connected to nature, but saw other Black Americans struggle to access those same healing, joyful experiences.

So in 2009, the mother-daughter trio founded Syatt — an acronym for “See You At The Top” — with a grant from the Cleveland Foundation’s Neighborhood Connections program, and set out on a mission to not only increase access to natural spaces for Black youth, but to produce and encourage Black joy in places that haven’t always been safe or welcoming of people of color.

According to a 2017 report by The Outdoor Foundation,  just 9% of the 144.4 million Americans who participated in outdoor recreation over the previous year were Black.

For the Hoods, those numbers aren’t surprising.

Black people often find power, confidence and healing in returning to natural spaces they were once harmed by or excluded from, said Marcia. But making that first trip can be difficult — especially for young people.

“We have to make them feel comfortable through our confidence,” said Marcia, who gave her own daughters the confidence to be present and joyful in natural spaces. “It’s like, ‘Yes, you do have a right to be here.’”

And to prove it, the Hoods lace up right alongside their participants.

“They see my hair all messed up and crazy looking after we kayak. If I got splashed or wet, or if we decide to swim, then you’re going to see Miss Erika wear her hair in an afro,” Erika said. “We’re going to share those experiences.”

For nearly 12 years, Syatt has worked with hundreds of young people of color, immersing them in outdoor activities and experiences like biking, hiking, kayaking, skiing and snowboarding, both in Cleveland and in the Cuyahoga Valley National Park, less than 20 miles south.

The Cuyahoga Valley National Park protects nearly 33,000 acres in Northeast Ohio, and follows the Cuyahoga River for about 22 miles. Park officials don’t track visitorship by race, said Daniel Calloway, a budget analyst for the park. But in 2010, the National Park Service reported fewer than 1% of all national park visitors were Black.

According to a 2020 report by the Center for American Progress, nearly 75% of people of color live in areas where natural spaces aren’t accessible, a disparity resulting in part from decades of racist housing policy and environmental and health inequities.

Arrye Rosser, an interpretive and education specialist at the Cuyahoga Valley National Park, said she hopes the park can diversify its visitorship over the next decade and place a new focus on Black narratives in the park’s storytelling and programming.

Ahead of the national park’s 50th anniversary, Rosser said committing to a focus on Black histories is “an act of social justice.” But Erika, Ebony, and Marica say the park still has a long way to go in terms of representation.

When Black Americans don’t see their own histories represented in natural spaces, young people of color are more likely to miss out on the mental, physical and emotional health benefits of spending time outdoors.

Chris Harvey, a graphic designer, Akron native and dad to 8-year-old Caden, said he turned to natural spaces like the national park when his mental and physical health became difficult to manage.

After completing his military service in 2013, Harvey said he knew he’d need extra time and space to process his experiences. That’s when he started hiking.

“I had a lot of health issues related to the military,” said Harvey. “I had epilepsy, and a traumatic brain injury that caused my epilepsy. And with that (comes) a whole host of other deals. I have a (traumatic brain injury), so it causes mental health and anxiety issues that I never had before.”

He said at first he wasn’t worried about facing harassment or discrimination outdoors. But over the summer, the presidential election cycle spurred political displays in natural spaces that have been tough for Harvey to stomach.

“We pulled into the campsite and there’s just signs everywhere, and just flags and flags,” said Harvey. “Like, confederate flags. … (People had) Trump signs outside their tents. I wasn’t worried until I saw that.”

“Whatever fears I didn’t have last year,” said Harvey, “I definitely have them now.”

Spending time outdoors has positively impacted both Harvey’s mental and physical health, but the 31-year-old is careful to note that it can be difficult to break generational cycles of fear when it comes to spending time outside.

“My grandma, aunts, uncles, (all have) stories of people being lynched, seeing it with their own eyes,” Harvey said, which makes spending time outdoors with his own son particularly important when it comes to changing the way young people of color experience nature.

“It’s a thing that’s actually bigger than me,” Harvey said. “We have to get outside, as a culture and as a community. It’s so important to be out there and show your kids that (nature) is for everybody.”

When her own kids were still toddlers, Marcia Hood and her husband loaded up their car and drove west, a spark of joy and determination that flourished in the Hood sisters. Now, they’re passing it on.

At the edge of the basketball court at Kerruish Park, just a few blocks from where the sisters grew up, a circle of kids erupt with laughter. Ebony glances over one shoulder, smiling. Behind her, Erika’s 17-year-old son Greg helps a younger boy find his balance.

“The magic is this,” said Ebony. “We call it Black joy. We experience it, and it is amazing. All of the stress just comes off of you and right there during that time you are just yourself, enjoying life and enjoying each other in nature.”

H.L. Comeriato covers public health for The Devil Strip in Akron, Ohio. This dispatch is part of a series called “On the Ground” with Report for America, an initiative of The GroundTruth Project. Follow them on Twitter: @hcomeriato

A version of this story appeared on USA TODAY on October 28, 2020