A clash between women’s rights and religious autonomy in India 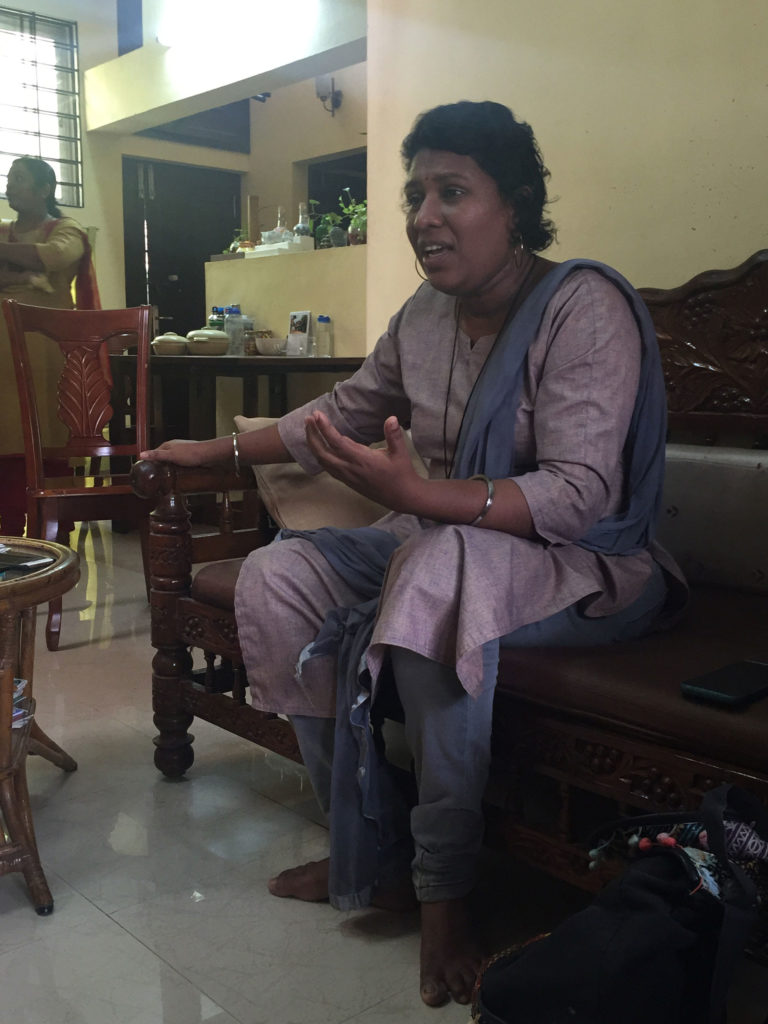 Bindu Ammini was one of the two women of menstruating age that entered the Sree Dharma Sastha Temple at Sabarimala, sparking protests. (Photo by Brooke Thames/GroundTruth)

KOCHI, INDIA — The street of the dense, urban neighborhood was empty save for a pair of policemen in crisp khaki uniforms guarding the perimeter of a modest house. Inside, feminist activist Bindu Ammini sat straight-backed on a wooden couch in a small parlor. She quickly apologized for making a group of journalists travel across town to see her. Her interview had been hastily relocated after the management at a hotel decided it didn’t want her police escort inside.

“The police make lots of troubles,” Bindu said in English with a soft smile. She wore a light plum-colored tunic over gray wash jeans, with a long scarf wrapped around her shoulder like rope. Near the kitchen, just a few steps away, a female officer in plainclothes observed us silently. “This is one of the main problems I face, my rights being curtailed.”

The activist has been living under heavy police protection since she and Kanakadurga, a government supplies officer, became the first women of menstruating age to enter the Sree Dharma Sastha Temple at Sabarimala. In September 2018, the Indian Supreme Court ruled illegal the temple’s tradition of banning females ages 10 to 50. Bindu and Kanakadurga entered the temple and worshiped the deity in January, sparking violent protests throughout the southern state of Kerala, where the temple is located.

The temple is dedicated to Lord Ayyappa, a Hindu god believed to be celibate. Every year, thousands of devotees dressed in black travel to offer prayers after a rigid fast. For 41 days, they abstain from indulgences, including sex, meat and alcohol, to purify themselves. Many Hindus regard women as unclean at the time of menstruation and thus unable to complete the purification process.

Bindu and Kanakadurga’s life-risking feat is one of the latest actions in the fight for women’s equality in India. It came after the Supreme Court lifted the ban on women’s entry in a 4:1 ruling, deciding that the tradition violated women’s constitutional right to gender equality. What has erupted since is an ideological battle between the sacredness of religion, the authority of government and advancement of women’s rights.

“We must call the discrimination that has happened at Sabarimala a kind of apartheid,” journalist Shahina Nafeeza said in an interview. Nafeeza has worked as a journalist for 20 years and is an organizer within Kerala’s feminist movement.  “All kinds of traditions are always imposed on women. The entire responsibility of carrying on a tradition falls on women. In India it is very tangible — you can see it.”

In Kerala, which is often touted as the nation’s most progressive state, a majority of residents find pride in their society’s efforts to support the advancement of women. Women in the state — which has a 99 percent literacy rate — are among the most educated in the country. Bindu herself completed a master’s degree in law and teaches at the School of Legal Studies at Kannur University. Yet, by exercising her rights, Bindu has become a kind of prisoner whose freedom and safety are nearly nonexistent.

“I know very well I may be attacked, I may be killed,” she said before describing the threatening posts Hindus have been leaving on her Facebook page. She spoke steadily in a lilting accent that betrayed no sense of fear about the danger.

After the ruling, outraged Hindus across Kerala promptly revolted. They held day-long hartals (labor strikes), skirmished with law enforcement and physically tried to block women from entering the temple. Protestors have been supported by the right-wing Bharatiya Janata Party, the ruling party of the country trying to keep its hold in national elections this spring.

In the world’s largest democracy, Kerala stands out for having a Communist government firmly committed to keeping religion and politics separate. Indian media has spotlighted the BJP for exploiting the Sabarimala issue to grow its religious voter base in the secular state.

“In your house, I’m sure there are some rules and regulations. If I come to your house, I certainly should follow them,” he said in an interview. “In Sabarimala, there is a traditional worship system. Those who don’t believe should not interfere in that matter. It’s the believers’ issue.”

The  Marxist Communist Party of India (CPIM) — which currently leads Kerala’s government — emphatically supports the Supreme Court judgment on Sabarimala. Bindu said she aligns with the Communist party on the left but watches all parties with a skeptical eye. She believes all parties play games when it comes to Sabarimala.

“The CPIM, BJP, and the Indian National Congress — all these parties play a double role on most of these issues,” she said. “Their aim is to come into power. They realized that [Sabarimala] is the best thing for their political propagation.”

Just hours before Bindu’s historic entrance into the temple, the CPIM helped rally millions of women to form a human chain across Kerala. The demonstration, popularly called the “women’s wall,” came after male devotees at the Sabarimala temple beat women attempting to visit. Anil Kumar, a CPIM district committee member, denies that the party has adopted a pro-women stance on the religious issue to lure voters away from right-wing parties.

Bindu questions the left’s progressiveness. In 2008, she held an elected position within another Communist party but said she resigned because of gender discrimination. When it comes to Sabarimala, she believes the state government was pressured to protect the welfare of women after the Supreme Court ruling. But parties like the CPIM still don’t do enough to directly combat violent protestors, she said.

Nafeeza agrees, claiming left-wing parties didn’t bother to address the issue of women’s menstruation until the temple issue ignited. The elections have now motivated them to speak out, she said.

“This is an issue they should have addressed 30 years back. They never talked about the discrimination against women and girls during the time of menstruation. They never talked about it because it’s something that touches the vote bank,” Nafeeza said. “It’s a shame that Kerala started talking about menstruation in public not because of any progressive movement, but because of calamities.”

“We will put forth concepts and principles for the development of women in society and Dalit empowerment,” she explained. “We lean toward the liberal left but we have no political interests. We are not part of any government.”

In many ways, Open Commune is a manifestation of Bindu’s complex reasons for entering the temple. As a Dalit, Bindu grew up in the lowest community in the Hindu caste system. She recalled frequently witnessing her brothers with upper-caste names suffer attacks by upper-caste families growing up. In her school days, she said she often received less recognition for her accomplishments in comparison to some of her lower-achieving, upper-caste classmates.

Bindu’s decision to enter Sabarimala was partly a stand against patriarchy perpetuated by Brahmins, the priestly class at the top of the caste hierarchy. Menstruating women weren’t formally barred from the temple until 1991, when the Supreme Court ruled the custom into law — a move Bindu considers Brahminical dominance. Her primary motivation, however, was constitutional gender equality.

“In Kerala, constitutional law is considered supreme, not religion or caste. Political parties fight against the constitution and the verdict of Supreme Court. This is illegal. I fight for lawful things — against gender discrimination in all areas,” she said.

She hopes Open Commune will be a corrective force against gender and caste discrimination. The organization urges men, LGBTQ groups and women of all faiths to join the fight. But Bindu said it’s difficult to get young Hindu women on her side: “Kerala’s younger generation has not experienced these kinds of social evils in their lifetime like the older generations have. Because of that they are strongly opposed to new progressive changes. It’s a painful thing.”

Nafeeza said this is true for women close to 40. But women entering young adulthood are eager to rebel against sexist practices, she said.

“Ninety-nine percent of young girls of college age say, ‘We don’t believe in such discrimination. We go to temples when we’re on our periods and we don’t tell them,’” Nafeeza said.

Those angered by Bindu’s actions often send threatening letters. She said the threats of violence don’t bother her so much as the offensive language authors use. The activist, who is also a wife and a mother to an 11-year-old daughter, worries that parents writing these words set poor examples for their children. Recently, she stopped reading a letter after the first paragraph because it was so abusive.

Nevertheless, she chooses to live without fear.

“I like to limit the protection. I think only one of the policemen is enough for me,” she said. “I interacted with people at the time of my visit to Sabarimala and after. In all my journeys, many people hug me and shake my hand. The start of this new renaissance will help us to achieve our goals. It’s a spark in the minds of the younger generation. It is a spark in the society. It can become a big fire. I am very hopeful.”