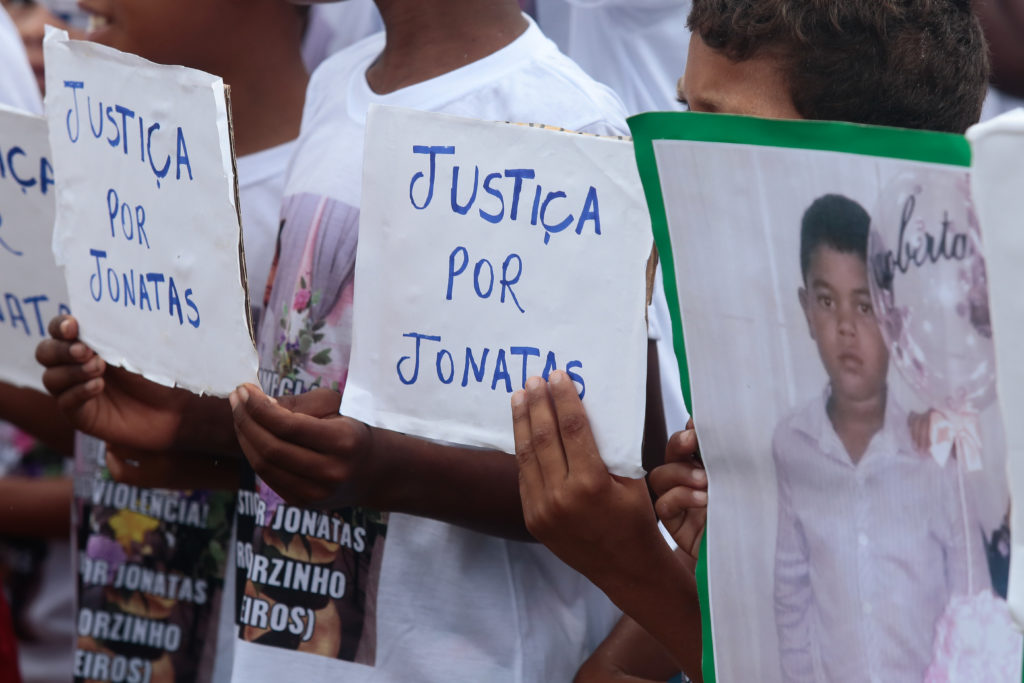 Nine year-old Jonatas Oliveira was getting ready for bed when seven armed and hooded men broke into his home, in Engenho Roncadorzinho, a small rural village of Barreiros City, in Brazil’s northeast Pernambuco state. It was about nine o’clock on February 10. He heard the invaders open fire and hid under his bed with his mother. The men shot Jonatas’ dad, Geovane da Silva Santos, in the shoulder, but let him escape and went straight to Jonatas’ room.

“He’s a kid, don’t shoot, he’s a kid,” shouted the mom in despair, standing up when the men found them and pointed their guns at the boy.

The men killed Jonatas with three shots to his head.

Jonatas’ assassination shocked his community not only for the brutal circumstances of his death but also for the reasons they believe are behind the crime. Geovane Santos, the father of Jonatas, is the President of the Family Farmers Association and one of the main leaders in the region advocating for the community’s land rights in an ongoing judicial battle involving the bankrupt estate of Cane Sugar Power Plant Santo André and the company Agropecuária Javari. Neighbors and friends that got together in a memorial and protested Jonatas’ death, eight days after the crime, believe the crime represents an escalation in the decades-long land conflict in the region, and fear this is a sign of intimidation for all of them. “I’m really scared,” said neighbor Edna Félix da Silva while holding her three-year-old daughter on her lap, during the protest. “Any noise outside the house, we run to close the door.”

Most of the nearly 90 families that live in Engenho Roncadorzinho are made up of former workers of the cane sugar power plant that went bankrupt more than 20 years ago, following the economic decline of the activity in the state. Since they had virtually no labor rights and didn’t receive proper payments for work they had done, the workers filed lawsuits demanding rights to the bankrupt company’s land that they lived on, as they still live in the footprint of the sugar cane mill. The bankrupt company is currently managed by the Judiciary, but private owners are still interested in profiting from the same land. About 15 years ago, the Javari company leased the land and filed a lawsuit trying to eject the families to expand the sugar cane plantation in the area. Last year, a Court order prevented the families’ eviction, but the situation remains unresolved.

According to the Federation of Rural Workers and Family Farmers of Pernambuco state (Fetape,) “in recent years, the community has suffered threats and violence at the hands of the companies that economically exploit the area”. They say the community was intimidated through several actions such as the “destruction of crops and the contamination of water sources and wells on the property through the targeted and illegal application of highly toxic pesticides.” Fetape is one of several organizations now demanding a response from the State and a more rigorous investigation into the nine-year-old boy’s murder.

The first hypothesis for the crime presented by the authorities sparked outrage in the community. In a press conference a week after the crime, the head of Homicide at Palmares Police Station, Marcelo Queiroz, explained that the investigation of Jonata’ death pointed to a group of drug dealers interested in buying the land where the family lived “to breed horses”. According to detective Queiroz, the alleged gang leader, who was already in jail for other crimes, was the one who determined the assassination of Jonatas’ father, Geovane. It was to be an act of revenge for his refusal to sell the property, but the killers killed the boy by mistake.

However, Geovane said he was never contacted by any drug dealer interested in buying the land. For security concerns, he and his wife didn’t attend the memorial. For the time being, he and his wife are at another address and their house is boarded up. Jonatas’ uncle, rural worker Carlos José de Oliveira, encapsulated how the community feels about the way the police are explaining the murder in one simple question: “How was it possible for the bandits to take revenge, because how do you buy land from people who don’t have any land?”

During the community memorial, children carried posters demanding “Justice for Jonatas” and the end of violence in the community. In tears, they sang a religious song to honor their friend, who loved playing soccer. After the song, Cícera Nunes, president of Fetape, took the microphone: “I remember one day not long ago that it was Jonatas who was there at school holding a sign saying ‘My future is on the land’.”

Senator Humberto Costa, member of the Workers Party (PT) and president of the Senate’s Human Rights Commission, participated in the memorial, too. “This is something that was planned by those who want to intimidate families, by those who want to generate panic, by those who want the community to stop resisting,” he said. “What is behind this death is the struggle for land, it is the agrarian conflict.”

The Justice and Peace Commission of the Archdiocese of Olinda and Recife released an open letter to the governor asking for “personal commitment in the rigorous investigation of the attack”. “This barbaric crime, perpetrated by seven hooded and heavily armed men, who did not hesitate to shoot a defenseless boy hidden under the bed with his mother, cannot go unpunished! Your Excellency cannot allow Pernambuco to become a state dominated by militias,” they wrote.

Following the negative reactions sparked by the Police press conference, in a meeting with several organizations, the State Secretary of Social Defense, Humberto Freire, reassured that the investigations are still ongoing. The bankrupt estate of Cane Sugar Power Plant Santo André and the company Agropecuária Javari have not responded to this publication’s requests for comment on the story.

This story was produced with support from Report for the World, a The GroundTruth Project initiative.