ON THE GROUND IN BALTIMORE, MD

Born with a ‘target on his back’: A Black mother confronts a grim reality 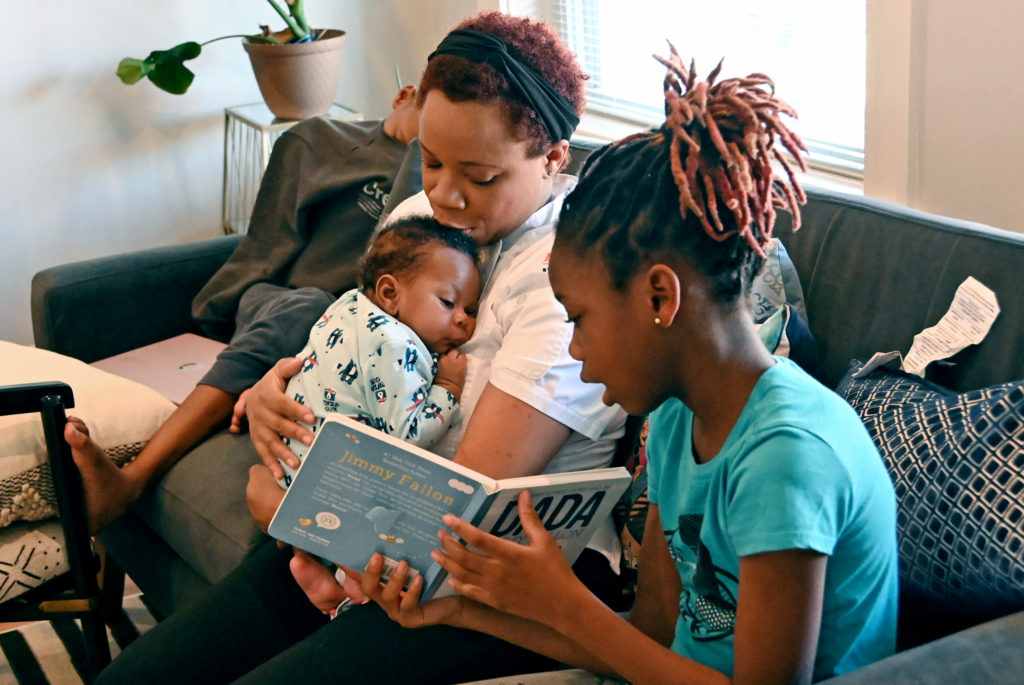 Catina Smith, 34, holds her infant son Joshua as daughter Micah reads to them and her other son Isaiah rests, on September 23, 2020. (Photo by Kim Hairston)

BALTIMORE – Catina Smith thought she knew exactly what to expect from her third pregnancy. The Baltimore native believed she had all the tools she needed to guide her through the nine month journey: training in the Air Force reserves, a career as a chef, a supportive boyfriend, two diligent children and an app that showed her baby’s growth week by week.

But as her due date loomed, it dawned on Smith that this pregnancy was going to be much more difficult than she anticipated.

Smith, a 34-year-old Black woman, was carrying her baby along with the stresses of COVID-19 and civil unrest ignited by police violence. What weighed most heavily though was fear, rooted in disproportionate infant mortality rates among Black babies, rates exacerbated by the social experience of Black American mothers who themselves are three times more likely to die in childbirth than white women. That number is 3.7 times higher in Baltimore, a city that is nearly 63% Black.

“I’m hoping doctors don’t brush off any concerns,” Smith said. “If something doesn’t feel right, I hope they investigate.”

The pregnancy was merely the beginning of a reality that Smith, and countless other women, find themselves forced to confront with the birth of their children. With a 12 and 11-year-old at home, she had experience with the complexities of motherhood, of the difficulties of protecting one’s child from racial violence while also wanting to protect their childhood.

“Right outside of our house, you see other row homes, ongoing construction and a number of people just hanging around on the street,” Smith said. “If you walk out the back of our house, it’s a quiet area with mansions… and either way he goes out, I fear someone is going to hurt him.”

Leading up to her delivery, Smith was haunted by the statistics. By June, she was agonizing over the son she had yet to meet, leaden with the knowledge that Black newborns are three times more likely to die in the hospital compared to white newborns.

“I felt like my son would be born fresh out the womb with a target on his back,” Smith said.

And as she was wheeled into the operating room for an emergency C-section, the questions flooded her mind: “What if something happens to the baby? What if they accidentally sew something in me? Will they let my boyfriend be there for the birth?”

The couple had a healthy seven pound baby boy. They named him Joshua, meaning God is salvation.

“I was overjoyed,” Smith said. “He was everything I wanted and more.”

Smith went back to work on the same day she got back home from the hospital. She was hosting weekly dinners with friends, preparing soups, pastas and pies, and spending time with her daughter and son, eager to get back to her old routine. But her body was slowing her down.

“I couldn’t interact with my kids the way I wanted,” Smith said. “My incision site was throbbing, I couldn’t do anything for myself and it was becoming more painful than when I had him.”

A few days later, Smith realized that she may have to endure another year-long journey, one she was not prepared for: the postpartum period.

“I found myself crying in the shower.. and I thought to myself ‘Oh no.’”

“It was getting harder to do the regular things,” Smith recalled tiredly. “In March, I was furloughed. In April, my children were at home doing virtual learning and in May the death of George Floyd gave me anxiety over my 12-year-old son.”

Roughly one in seven American women suffer from postpartum depression, a period of emotional and physical changes that can occur soon after delivery or up to a year later, sometimes contributed to by shifting hormonal levels. Black American women are twice as likely to experience PPD and are less likely to get help for it.

“When it comes to mental health in postpartum depression, structural and institutional racism creates barriers for having access to care,” said Andrea Williams-Muhammad, a program coordinator at Baltimore Community Doula. The organization, composed of birth and postpartum doulas, works to address the health disparities in African American and Latina women.

“It’s not about being college educated, having insurance, or the ability to call a psychiatrist,” said Williams-Muhammed. “It’s also the ability for medical staff to recognize that there’s a stereotype against Black women for being strong, they need to hear the cries that go unheard.”

Dr. Serena Michelle Ogunwole, medical practitioner and health disparities researcher at Johns Hopkins Medical Center, focuses on the disparities that African American women face in the healthcare system and the transition between primary care and obstetrics.

Although new mothers are less likely to physically go to their doctor with concerns, Ogunwole sees a positive shift in patients seeking help due to the convenience of telehealth visits, which allows doctors to conduct visits and examinations with their patients online.

“Diagnosis is being delayed because people aren’t coming into the doctor’s office,” said Ogunwole. If you need a mood assessment text, call or have a video conference with your provider.”

The adjustment was a challenge for Smith.

“I tried to adjust to the new schedule but it’s still exhausting,” said Smith. “I’m up at night taking care of my baby and I have to be up early to log onto Google classroom for my daughter; there are hiccups with the internet at times and find myself still having to have ‘the talk’ with my 12-year-old son.”

Parenting during the pandemic is not what Smith anticipated but she said having a new baby in the home gives her hope.

Yet Smith is determined to adjust to the new normal.

“This journey has been exciting, emotional and not at all expected,” Smith said. “But as long as we are happy and healthy, I’ll be in a good headspace.”

Tatyana Turner is a 2020-21 corps member for Report for America, an initiative of the GroundTruth Project, a national service program that places emerging journalists in local newsrooms. She covers African American neighborhoods, life and culture. Follow her on Twitter: @tatyanacturner