57 years after MLK’s Letter from Birmingham Jail, the Black church marches on 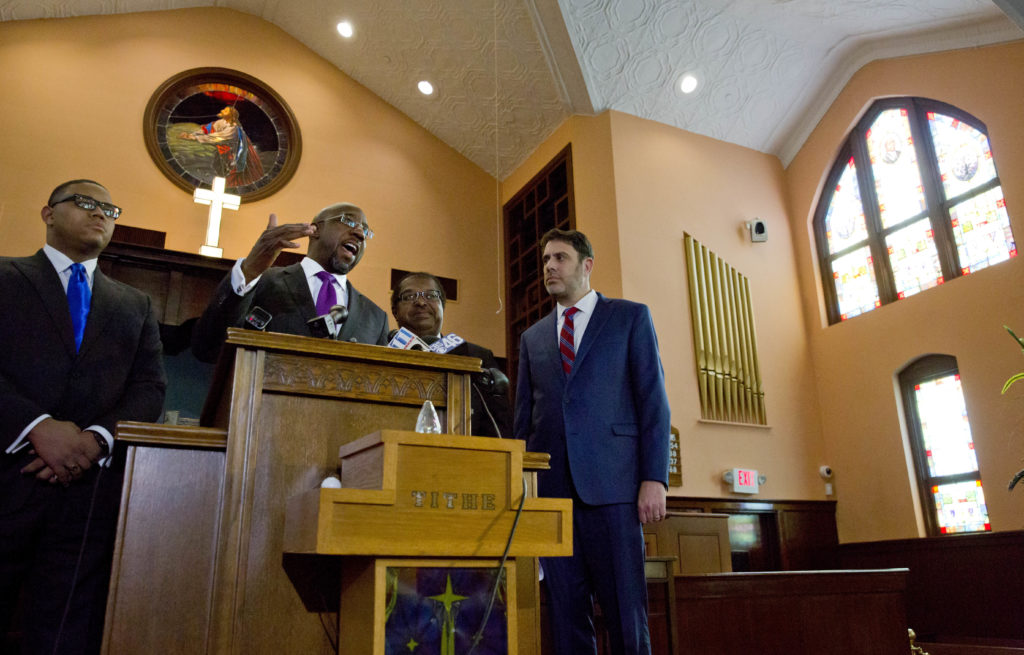 The Rev. Dr. Martin Luther King, Jr.’s iconic “Letter from Birmingham Jail,” began humbly, as a few sentences jotted in the margins of a copy of the April 12, 1965 edition of the Birmingham News. In that issue, published the same day Birmingham police arrested King for violating a state court injunction against protesting, a group of eight white Birmingham clergy criticizing the protests and the involvement of outsiders.

King’s letter took gentle but firm issue with his fellow clergy: “I have heard so many ministers say, ‘Those are social issues which the gospel has nothing to do with,’ and I have watched so many churches commit themselves to a completely otherworldly religion which made a strange distinction between bodies and souls, the sacred and the secular.”

In embracing the spiritual and the physical, the pulpit and the protest, King embodied a Black American church tradition that traces back over two centuries.

The tradition began with a walkout. On a Sunday morning in 1791, the Rev. Absalom Jones, in his seventh year as a minister to the Black members of St. George’s Methodist Episcopal Church in Philadelphia, knelt to pray. But he was in the wrong place.

The church had decided to segregate the growing body of Black worshippers to balcony pews. In the middle of the congregational prayer, white trustees physically wrested Jones off his knees, whispering angrily that he couldn’t kneel there.

Jones, along with the Rev. Richard Allen and the rest of the church’s Black members, immediately walked out. Allen would go on to found the African Methodist Episcopal Church in 1794, the first Black denomination in the U.S.

More than two hundred years later, the church has proven to be the most sustainable institution in Black America: a body not just for worship, but for community care and political organizing. It has made religion and politics part of the same breath, arguing that saving souls also means saving the bodies that hold them and that Christians have a responsibility to fight oppression.

“This is a tradition,” said the Rev. Dr. Pamela Lightsey, a theology professor and United Methodist minister in Chicago. “America’s just waking up to it.”

Polls can’t do justice to the role Black Christians play in politics, because pollsters haven’t really asked. AP’s exit pollsters, for example, only published two questions about the intersection of race and religion after the 2020 election: “What is your religion?” (results listed four “white” religious categories and one, simply, as “nonwhites”) and “Would you describe yourself as a white evangelical or a white born-again Christian?”

But Black Americans are the most religious racial or ethnic demographic in the country by multiple metrics, and a recently published Pew study indicated that most who attend religious services do so in Black congregations (60%) or multiracial congregations (25%). The church remains a powerful force in mobilizing Black voters.

President Joe Biden surged to the Democratic nomination thanks to a South Carolina primary win hand-delivered by influential U.S. Congressman James Clyburn (D – South Carolina), the son of a Church of God in Christ minister and prominent member of the AME Church.

And, in a January runoff, Georgia voters stunned the Republican Party by electing as U.S. Senator the Rev. Dr. Raphael Warnock (D-Georgia). Rev. Dr. Warnock, who preaches from the same Ebenezer Baptist Church pulpit as the Rev. Dr. Martin Luther King, Jr., and who Savannah, Georgia pastor and activist the Rev. Dr. Francys Johnson calls a “prince of the Black Church.”

But, reminds Johnson, Warnock doesn’t come from the “high and lofty pulpits of an Ebenezer,” but from his mother’s “storefront church in Savannah, catering to the working poor.”

For Johnson, Warnock’s path from a storefront church to fighting for healthcare in the U.S. Senate makes perfect sense.
“The Black church always understood itself as a resistance to white supremacy,” said Johnson. “[Black theologian] James Cone hits on it when he suggests that Black people identify with Jesus Christ. The very cross that he died upon.”

Race has long been a stumbling block for American Christianity. The Methodist Episcopal Church split over whether its bishops could own slaves in 1844. The Baptist General Convention split the same year over whether its missionaries could own slaves (the slavery-condoning half, the Southern Baptist Convention (SBC), is now America’s largest Protestant denomination and continues to struggle with questions of racial justice). A year after the start of the Civil War, the Presbyterian church split over dueling allegiances to the Union and Confederacy.

White slave owners were creative in their attempts to quell Black resistance and, by extension, worship. Some famously edited out bible passages that discussed freedom, and by the Civil War, lawmakers in eight southern states passed laws to keep enslaved Black people from learning to read. Other “Negro codes” dating to the colonial era barred Black worshippers from gathering without a white monitor. It wasn’t until emancipation in 1863 that African Americans, newly freed from white overseers, began worshipping in their own churches in earnest.

The post-Civil War Reconstruction era was particularly fertile for Black power, and saw 15 U.S. Black Congressmen and one Black Senator (Hiram Revels, a former AME and Methodist Episcopal minister) elected across the former Confederate states. But the hope of Reconstruction crumbled after the federal government pulled troops out of the South and allowed white southerners to reassert control. Black organizing turned inward, to the one Black institution, said the Rev. Dr. Heber Brown, of Baltimore, “where Black people can organize outside of the white gaze.”

Brown’s own organizing began with a church garden, started to help supply his congregation with fresh produce. When protests rocked Baltimore after the 2015 death of 25-year-old Freddie Gray in police custody and some stores shut down, Brown said he and his church started delivering food to demonstrators.

That inspired the pastor to officially launch the Black Church Food Security Network, an innovative program designed to connect food deserts with Black farmers and to turn empty church land toward food production. It’s an attempt, he said, to build something outside the regular food system, based primarily on one thing the Black church owns more of than any Black institution: land.

The focus on community care is a shift from the reason he says he joined the clergy: to influence the public square. “I saw it as part of what it meant to be a minister,” he said. But he says he became disillusioned with the “reform” approach, and began to look to other icons “from the bosom of the Black church.” Icons like 19th century AME Bishop Henry McNeal Turner, who famously proclaimed that “God is a Negro,” and like Nat Turner, the enslaved Baptist preacher who organized a four-day rebellion of enslaved and free Black people in Virginia in 1831.

In Atlanta, the Rev. Timothy McDonald, III’s church has also organized around food, serving an estimated 50,000 meals to underserved members of his community since the start of the COVID-19 pandemic, in addition to leading major protests following the murder of Ahmaud Arbery last summer.

“The Black church is where the Black community comes together on a regular basis,” said McDonald, a veteran political organizer who began his career as the assistant pastor of the historic Ebenezer Baptist Church. “[It’s] where we lift up every aspect of Black Life: the political, the educational and the social.”

For McDonald, these moments are imperative to the Black church experience. “The role of the Black church is not just to educate, but to engage [our] people,” said McDonald. “We don’t have a worship service, even over Zoom, where we don’t talk about elections. We open up every service with community issues and concerns.”

The role of the church, though, is slowly changing. Black millennials are less religious than any of their forebears, per Pew, followed closely by Gen Zers. Organizers are intentionally decentralizing their work, often away from churches. “In terms of strategy — and this is very real that we have to be honest about this — it makes it harder for those who are against us to do what they did in the ‘60s, which is to target one leader,” said Black Voters Matter Fund Co-founder in an interview with Politico last summer.

“The Black community is still very spiritual, but they’re looking at organized religion and the Black church very differently,” said Rev. McDonald. “We can meet the community where they are, especially the young Black people, because there has never been a successful movement anywhere in the world without the active engagement of young people.”

A mile’s walk from St. George’s Methodist Episcopal Church, where the Rev. Jones once knelt to pray, parishioners still worship at Mother Bethel AME Church, where the Rev. Allen and the AME church first settled. Outside the building — which sits on the oldest parcel of land continuously owned by African Americans — a bronze Rev. Allen stands atop a granite plinth, arm upstretched. “Apostle of freedom,” read the words hewn into the stone, “proclaiming a liberating and reconciling gospel.”

From church pulpits, Bible studies and Sunday schools, through food programs, protest marches, and the voting booth, that gospel rings on.