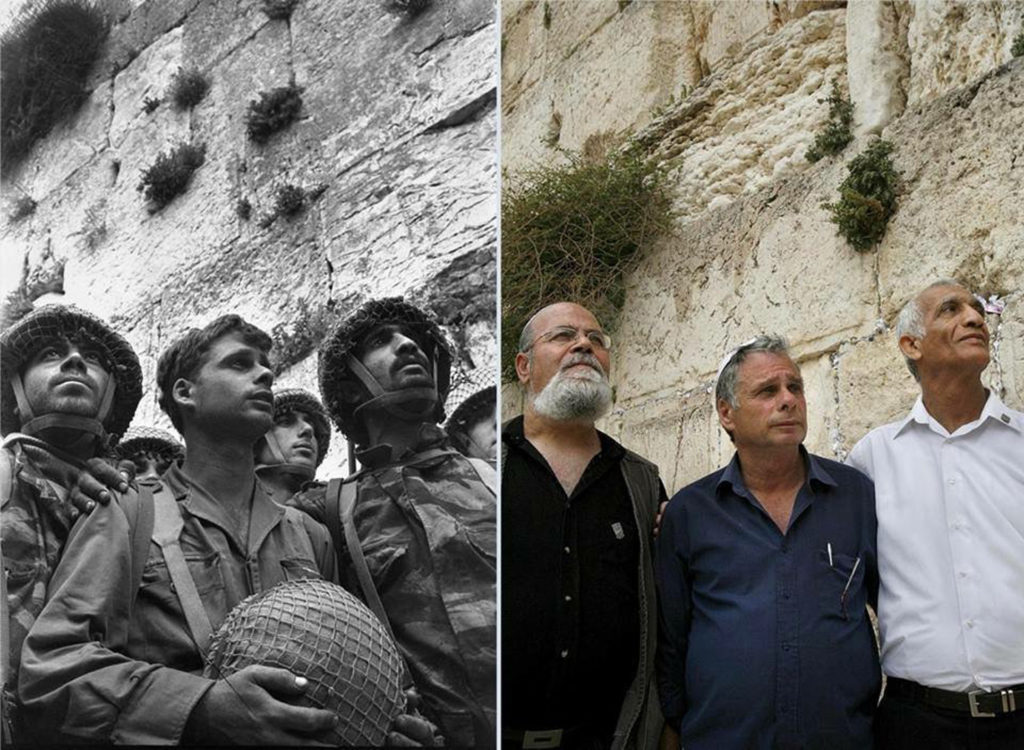 JERUSALEM – The photograph is iconic.

The camera angle tilts upward and it frames the rugged but idealistic faces of three Israeli paratroopers standing in front of the Temple Mount in Jerusalem. The three men are gazing to the sky – perhaps in awe of some higher power or still scanning the horizon for enemy forces. The Six-Day War was only in its third day.

The photograph was taken on June 7, 1967, 50 years ago to the day, just 20 minutes after Israel had captured East Jerusalem and reclaimed the Kotel, or the Western Wall, which is all that remains of the Second Temple of Judaism after nearly 2,000 years of separation and exile for the Jewish people.

Taken by the legendary Israeli photojournalist David Rubinger, the image remains the defining moment of the region’s most fateful modern conflict.

The three Israeli men in the photo — Dr. Yitzhak Yifat, Tzion Karasenti and Chaim Oshri — have aged. They are now in their 70s, but they’ve stood as symbols of the historic Israeli victory for the past five decades. And now they have set out on a speaking tour on this anniversary and they will be in several cities in the United States this month, including Boston, to reflect on the meaning of that day and to bring the complexity of emotion that comes with the memory of war by those who fought it, and what they have to say goes beyond the dimensions of a single black-and-white photo. For them, the war was just as much about loss.

“To liberate the Kotel was something amazing,” Yifat recently told reporters in Israel.

“But we never celebrated. What was there to celebrate? We had lost many of our friends,” he added. 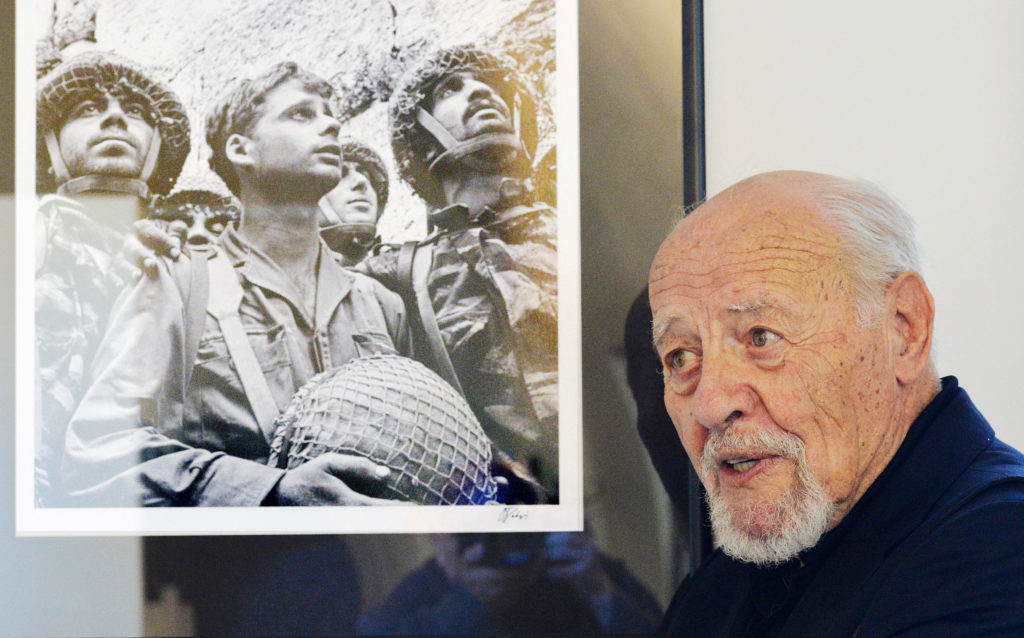 Israeli photographer David Rubinger poses with his famous photo of three Israeli paratroopers after the recapture the Western Wall in the Six-Day War at an exhibition called “Israel Through My Lens” in Old Town Hall, Prague, Czech Republic, on July 3, 2014. (CTK Photo/Michal Dolezal)

Indeed, 100 Israeli paratroopers were killed in the fighting that day and 400 were wounded. There were even more casualties among the Jordanian soldiers who had laid claim to the city and who lost the war as hundreds of thousands of Palestinian refugees fled their homes fearing for their lives.

By the end of the six days, Israeli had taken the Sinai and Gaza from Egypt, the Golan Heights from Syria, and all of East Jerusalem, the West Bank and the Jordan River Valley from Jordan. When the fighting ended, Egypt had lost 11,000 troops, Jordan had lost 6,000 and Syria 1,000. The Israelis lost 700.

The memory of the Six-Day War is a dividing line, as thick as the concrete of the 30-foot “security walls” that Israel has built up along the West Bank and Gaza which are intended to separate the two populations. The two sides of this conflict have been fighting intermittently over the Israeli occupied land for most of the five decades since.

With the victory of war in 1967 came the burden of occupation. Israel took control of the Arab neighborhoods of East Jerusalem, the villages and towns of the West Bank and the crowded warrens along the narrow strip of coastal land known as Gaza. Along with that land came the people who live there, including what is now a population of more than 4.5 million Palestinians.

The country remains deeply divided over whether to give the land back or push forward into what religious Jews would call Judea and Samaria. Meanwhile, the expansion of Jewish settlements in the occupied West Bank continues at a rapid pace, part of a strategy to create “facts on the ground.”

The Israeli left clamors for — and the international community insists on — an agreement that boils down to an exchange of land for peace, establishing a still-unformed Palestinian state to be given independence and governing authority.

“A majority of Israelis long ago reached the conclusion that continuing to rule over another people is not good for the long-term health of Israel as a Jewish and democratic society,” said Yossi Klein Halevi, author of “Like Dreamers,” a history of Israel through the lives of paratroopers who fought for the Old City in 1967.

“Israelis are stalemated against themselves,” Halevi added in an interview with The New York Times.

The Oslo Peace Accords signed in 1993 and 1995 established a hopeful new framework for negotiations intended to peacefully establish two states that could peacefully coexist side by side. But leaders on both sides have been unable to achieve a lasting peace in a land that is holy to all three Abrahamic faiths.

For Muslims, the Western Wall retains the Al Aqsa mosque, which the Islamic faith holds is the spot from which the Prophet Mohammed ascended to Heaven. For Christians, the nearby Church of the Holy Sepulcher houses the place where tradition holds Jesus was crucified, buried and rose again.

With its overlapping sacred space, Jerusalem remains the most powerfully emotional issue at the core of the so-called “final status” of any future peace agreement between the Israelis and Palestinians. In 1947, the UN plan for the division of Palestine called for a Jewish and an Arab state with Jerusalem to be separate and governed by an international body. Recognizing the unresolved political status of Jerusalem, the United States, along with the rest of the world, maintains its embassy in Tel Aviv with a consulate in West Jerusalem and East Jerusalem.

Israel proclaims all of Jerusalem as the eternal, indivisible capital of the Jewish people. The Palestinian Authority holds that East Jerusalem must be the seat of the state of Palestine.

President Donald Trump has said he will fulfill a campaign promise to move the U.S. Embassy to Jerusalem, a move that Middle East analysts believe would likely lead to an eruption of violence as Palestinians would view it as the official death knell for the Oslo Accords. So far, Trump has delayed the decision hoping to reignite peace talks.

Back in 1967, the foreboding about how to handle the conquest of East Jerusalem began immediately following that moment the paratroopers captured it. The legendary Israeli Defense Minister Moshe Dayan, famous for his eye patch, peered through a set of binoculars with his one good eye and saw an Israeli flag waving over the Al Aqsa mosque and immediately ordered it to be taken down, determined that Israel would not flaunt its military control of a sacred site.

In David Rubinger’s famous photograph at the Western Wall, one of the soldiers has removed his helmet as if out of respect for being in the presence of a holy place, and there is moss growing out of the crevices of the ancient stones.

I got to know Rubinger in 1997 when I first landed in Jerusalem as the Middle East Bureau Chief for The Boston Globe. And over the years, we became friends. He was still working then for Time magazine, covering the story that was his life from the time he escaped his native Austria as a teenager just before the Nazis annexed it. Like many European Jews fleeing Nazi Germany, he fled to what was then called Mandatory Palestine to live on a kibbutz in the Jordan Valley. Israel was his home for the rest of his life.

Sadly, he passed away in March of this year just before marking this 50th anniversary of his most famous photograph. Shimon Peres called him “the photographer of the making of a nation.”

One night at his home in West Jerusalem, he showed me a print of that image of the paratroopers at the Western Wall and talked about the moment he took it.

As he remembered, shots were still being fired in the fighting. Soldiers were overwhelmed at the enormity and symbolism of the moment as Jews had retaken control of their most holy site for the first time in two millennia. They cried, and so did Rubinger. It felt like nothing short of a miracle.

Rubinger has said he photographed the image from down low because the war was still going on. He also said he wanted to get as close as possible, and he was trying to frame the Israeli paratroopers’ faces against the ancient stones of the wall as they cast their gaze upward.

And that simple decision of craft seems to somehow express the moment less as a conquest, and more as a question: Who will control this sacred land? If that’s the question, the three men seem to be searching for an answer not from their military commanders but by looking to the skies and to a much higher power.