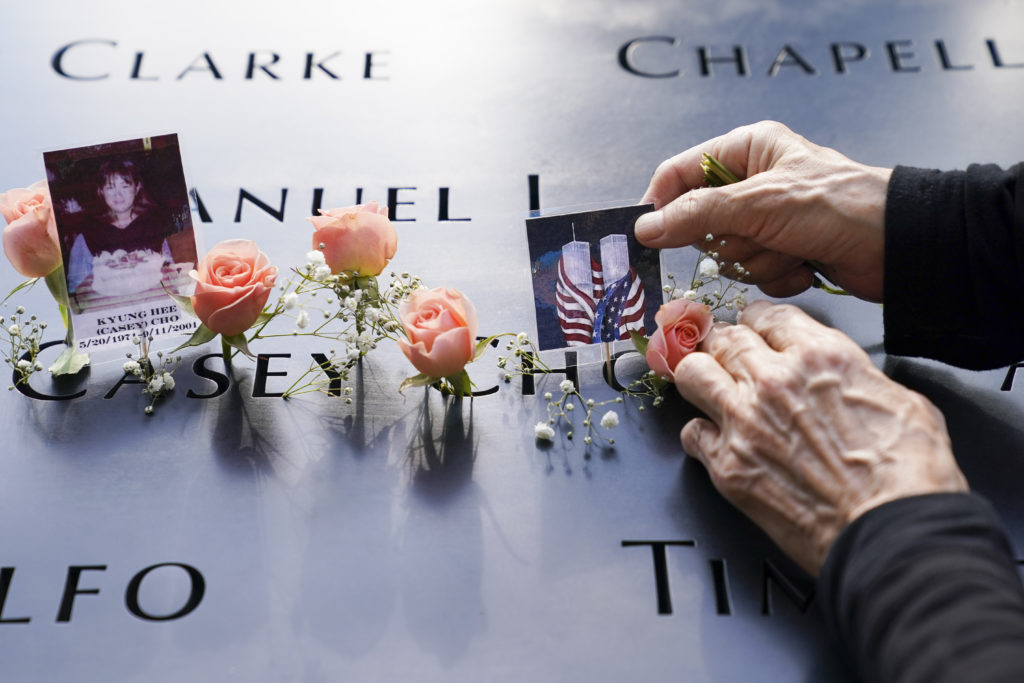 Mourners place flowers and pictures in the name cut-out of Kyung Hee (Casey) Cho at the National September 11 Memorial and Museum, Friday, Sept. 11, 2020, in New York. Americans commemorated 9/11 as a new national crisis in the form of the coronavirus pandemic reconfigures and divides anniversary ceremonies and a presidential campaign carves a path through the observances. (Photo by John Minchillo/AP Photo)

Ahead of the 20th anniversary of the attacks of Sept. 11, 2001, many American communities are reflecting on the cruelty and the heroism witnessed on that day. For many, it will also be a day to mourn the many things lost following the attacks: family and friends who died that day, the many lives lost in the war in Afghanistan, the many more scarred and maimed over those decades of overseas conflict, that sense of security, the compromise of American values for the sake of security, and, in recent years, the loss of national solidarity and truth.

Even so, most Americans under the age of 26 do not have personal memories of the terrorist attacks, a Pew Research poll suggests. But, as one local member of Gen Z told Catherine Nolte with the Fort Smith Times Record, he and his classmates “come from a generation that doesn’t know a life before 9/11.”

The present consequences of the attacks and ensuing war are felt by all those living in America, but especially veterans and their families and Muslim, Arab and South Asian diaspora communities in the U.S.

In Pennsylvania, Report for America corps member Anthony Orozco spoke to Muslim and Arab Americans who remember not only the terror of the 9/11 attacks, but the fear of Islamophobic attacks and discrimination from fellow community members in the aftermath.

And now, in the wake of the U.S. withdrawal from Afghanistan, veterans and Afghan Americans alike are leading efforts to help those fleeing the bitter conclusion of America’s longest war.

Lexi Krupp with VPR spoke with a Vermont Army veteran working tirelessly to save his former Afghan interpreter. Meanwhile in Minnesota, Hibah Ansari with Sahan Journal reported that many Afghans in the state were struggling to help family members escape and shared information on how other community members could help.

Here are more stories from across the country, from your community perhaps, about the ways Sept. 11 is being remembered, and the ways it continues to affect life nationwide.